Jan. 31 — Prior to Jan. 28, most of us were likely unaware of the death-rendering results of exposure to liquid nitrogen, including the low-wage workers at Foundation Food Group in Gainesville, Ga. It is used in food processing plants across the country to rapidly freeze products for shipping. 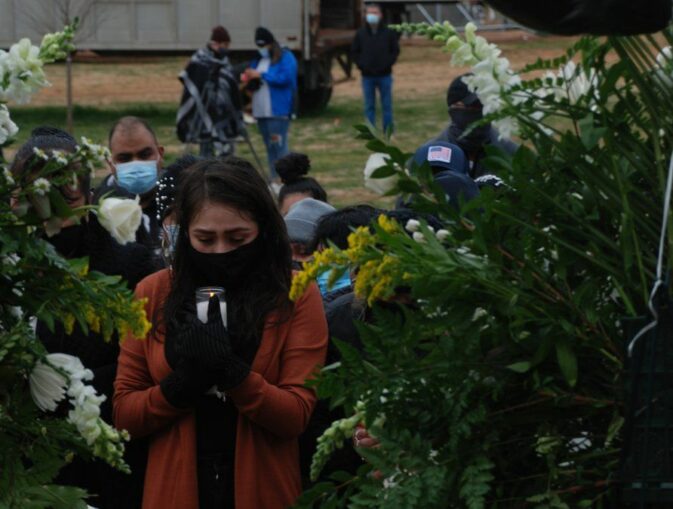 People gather on Jan. 30 for a vigil outside the plant in Gainesville, Ga., where six workers were killed in a liquid nitrogen leak.

Kept at −320° F, the odorless, colorless vapor is released in a confined space to flash freeze whatever it touches. In sufficient quantities, it can reduce the amount of oxygen in the air and cause asphyxiation.

A little after 10 a.m. on Jan. 28, calls began coming into the Hall County, Georgia,  911 emergency phone number. Workers were collapsing, unable to breathe or suffering from freezer burns. A liquid nitrogen line had ruptured.

When emergency crews arrived, they found 130 panicked workers outside the building. Several were in medical distress. The survivors described a thick fog that obscured their vision and impacted their breathing. There were reports that supervisors had been told of a problem with the liquid nitrogen lines the day before, on Jan. 27, but they told the workers they needed to make production and to keep working.

Five workers were dead at the scene, and one died in the hospital. Five of the six who died were Latinx. At least 10 to 12 more people, including four firefighters, were taken to area hospitals. As of this writing, while some of those stricken have been released, including the emergency personnel, at least three workers are still in critical condition.

Georgia leads the country in the poultry producing and processing industry. Gainesville and its surrounding area — located about 60 miles northeast of Atlanta — is considered the “poultry capital of the world.”  Besides the giant corporations that have plants in the state, there are a lot of small businesses like Foundation Food Group, a company formed from a recent merger between Prime-Pak Foods Inc. and Victory Processing Inc. The business has four facilities in Gainesville.

It should be noted that Prime-Pak was fined several times in recent years by the Occupational Safety and Health Administration for using unsafe equipment, amputation injuries in two workers’ fingers and defects in eye protection.

The plant’s workers process raw chicken into chicken tenders, nuggets and individual cuts used by restaurants and food service operations, partially cook them and then freeze them for later use.

This low-wage, repetitious, fatiguing work in Georgia’s $41 billion poultry industry is largely done by immigrants, documented or undocumented, and people of color, many of them women. The industry is largely nonunion, and abuses of all kinds, from stolen wages to sexual and racist harassment, can occur without consequences.

In addition, the COVID-19 rates in Georgia and particularly in this region of the state are alarmingly high.

Although the immigrant community has built religious, community and business structures that offer some protection, there is a strong presence of virulent anti-immigrant forces. These include the Ku Klux Klan and others, who over the years have posted threatening flyers and held rallies and marches in the Gainesville area. Following the Jan. 28 deaths, denigrating and hateful comments appeared on social media sites reporting this story.

A number of local, state and federal agencies are investigating the cause of the liquid nitrogen release, but their reports are not expected anytime soon.

Immigrant rights activists in the area are concerned about the workers’ emotional and financial security. And they are concerned about possible retaliatory measures by Foundation Food Group if workers testify about the company’s safety failures or are subjected to harassment or detentions by Immigration Customs and Enforcement.

No worker should fear they will be injured or die under totally preventable circumstances on the job. Workers should have the final say of whether their workplace is safe. That is the lesson to be learned from Jan. 28 in Gainesville, Ga.