The writer is an author and political activist living in Cologne, Germany.

No sooner was it clear that Joe Biden had won the U.S. presidential election, than he brought Brian Deese on board: Head of the department for global sustainable investing at the U.S. investment firm BlackRock, Deese will become the president’s chief economist. BlackRock’s chief Lawrence Fink is, after all, the spokesperson of Western world capital for “sustainability.” And “sustainability” will be the hallmark of the new administration. 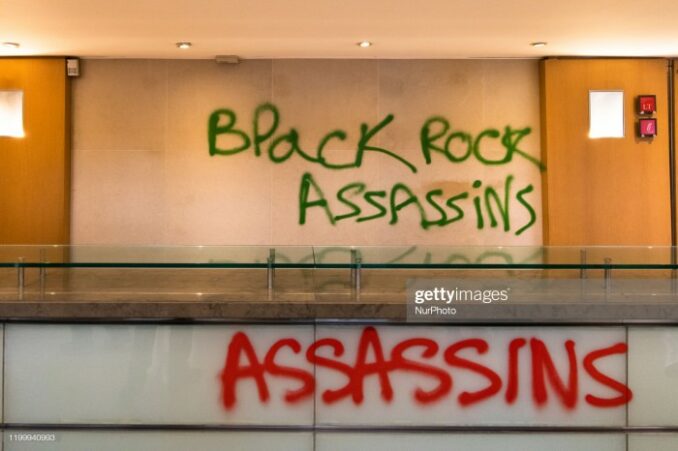 The second nomination followed: Wally Adeyemo, who was chief advisor to President Barack Obama on international economic relations. He then moved to BlackRock as the head of Fink’s legal department and has been president of the Obama Foundation since 2014. Now, under Biden, he is to become deputy secretary of the Treasury.

Then came the third nomination; Michael Pyle was in charge of International Financial Relations at the Treasury Department under Obama. Then he became head of global investment strategy at BlackRock. And now he’ll be chief economist for Vice President Kamala Harris.

That’s how the revolving door of U.S. capitalist democracy works: from BlackRock to government, from government to BlackRock and back again — and repeat.

Biden: Lobbyist for the largest corporate tax haven on earth

Biden was a senator for the U.S. state of Delaware from 1973 to 2009. He had already campaigned for this office as a 29-year-old business lawyer and held it for 35 years.

This mini-state with less than a million inhabitants is the largest corporate tax and financial haven in the U.S.-led West: The number of shell companies numbers at least twice that of the number of eligible voters. Virtually all the major companies and banks in the U.S. — or their subsidiaries — have their legal and tax headquarters here.

Well-paid trustees manage the corporate mailboxes here: This is Delaware’s signature industry. Tens of thousands of companies and banks from all over the world, ranging from Ukraine to Mexico and including Germany, France and Britain, have their legal domicile in Delaware [a state that was the creation of the Dupont Chemical Company].

The list of holdings of Deutsche Bank alone shows several dozen shell companies in Wilmington, the small capital of the little “Luxembourg of the U.S.A.,” as Delaware is often called.

In the mini-state of Luxembourg, which is so central to the European Union, His Royal Highness Grand Duke Henri of the Luxembourg-Nassau dynasty reigns. In Delaware, the Biden clan rules with Senator [now President] Biden at its head. Son Beau Biden became Attorney General here without making a special effort. Son Hunter Biden is an active financial speculator in Ukraine, among other places — when necessary, father Biden also intervened on his behalf in Kiev.

Joe Biden has recently received donations for his election campaigns from major digital companies such as Alphabet/Google, Microsoft, Amazon, Apple, Facebook and Netflix, as well as JPMorgan Chase, Blackstone and the Walmart clan. But Delaware companies also promoted their influential senator, including the credit card company MBNA and John Hynansky, who is from Ukraine and dominates the export of premium SUVS to Ukraine.

Biden, as a senator in Washington, always voted with Republicans on major financial sector deregulations. With the help of their senator, Delaware expanded to become the largest financial haven in the world. This includes an extremely “free market” corporate constitution (extremely low liability) and a judiciary that goes with it.

Of course: the global corporation BlackRock, which co-governs in Washington, also has its legal seat in Wilmington, Delaware.

BlackRock as an ‘America First’ player

BlackRock is a major shareholder in some 18,000 companies, banks and financial services firms in the U.S., EU, Britain, Asia and Latin America. In three decades BlackRock has risen to become the largest capital organizer in the U.S.-led West, mainly by collecting and investing the capital of the super-rich.

Business families or top managers that have at least $50 million of discretionary wealth can become a customer. An investor like BlackRock promises higher profits than can be earned in normal capitalist operations. BlackRock (here and in the further text always meant as the most important representative of this new investor type) “earns” the higher profits by a combination of several practices.

Thus, the approximately 5% of the shares of the lignite company RWE are distributed among 154 letterbox companies in a dozen financial havens, under names such as BlackRock Holdco 4 LLC, BlackRock Holdco 6 LLC, and the like. Of course, BlackRock does not commit tax evasion itself, but offers the opportunity to do so; legally speaking: Aiding and abetting.

BlackRock co-owns 18,000 companies — in Germany, for example, Wirecard — including all digital corporations such as Amazon, Google, Apple, Microsoft and Facebook, and also co-owns the two largest rating agencies Standard & Poor’s and Moody’s. As the largest insider, BlackRock can access decisive data the fastest — before other co-speculators.

Furthermore, BlackRock, as the chief financial manager for the Western super-rich, can ignore damages to national economies. The impoverishment of states through organized tax evasion continues, including the U.S.A. and Germany. Even the EU remains powerless against it or turns into an accomplice.

In addition, the companies in which BlackRock buys in as a co-owner — for example, in Germany, all DAX corporations — are profitably “restructured,” shrunk, partially sold (as is currently the case with ThyssenKrupp), merged (as is the case with Bayer-Monsanto), accompanied by job cuts, outsourcing and the like. As a major shareholder in Amazon, for example, sustainability preacher Fink has never said anything against union-buster and low-wage boss Jeff Bezos.

It is often argued, not only by BlackRock lobbyists such as Friedrich Merz, but also by leftists, that the 5% shares of BlackRock, as in RWE — surely no decisions can be pushed through with that! Yes, it can, because with BlackRock there are usually always, in varying composition, a dozen similar capital organizers who are also shareholders at the same time, for example Vanguard, State Street, Amundi, Norges, Wellington, Fidelity, Capital Group — and they talk to each other.

The U.S. government under Biden is thus showing itself to be the government of both the traditional and the new super-rich. This is a capitalist, selfish radical minority of perhaps one to two percent of the population in the United States. However, BlackRock also represents the capital interests of similar minorities in other important countries such as Britain, Germany, France, Sweden, Spain, Mexico: They all have their discretionary capital invested with BlackRock & Co.

Obama, Trump, Biden: All with BlackRock

In 2008, U.S. President Barack Obama commissioned BlackRock to handle the financial crisis and decide which bank, which insurance company, which corporation would be saved — or condemned.

BlackRock pocketed the three-digit million fee for this — but even more important was the official state blessing. This included the appointment as advisor to the largest central bank in the Western world, the Federal Reserve Bank. That was the starting shot for the final climb in the annual 10% increase in capital collected and deployed to the now eight trillion U.S. dollars.

Even under Trump, BlackRock was by no means disengaged. Since March 2020, and as an advisor to the Federal Reserve, BlackRock has managed the Corona bailout program, much like the EU’s 750 billion “Corona Recovery Program.” BlackRock CEO Fink was in the running to be Hillary Clinton’s Treasury Secretary. But when election winner Trump slashed taxes on corporations, the agile Fink lauded him, saying, “Trump is good for America.” BlackRock is an active part of “America First,” regardless of which of the two monopolistic U.S. parties is in power.

See the following sources: Joseph DiStefano: Joe Biden’s Friends and Backers Come Out on Top—at the Expense of the Middle Class, The Nation, Nov. 7, 2019;