The writer was the director of international relations in Venezuela’s presidential office and the country’s ambassador to Nicaragua. Currently, he is a guest professor at Shanghai University in China. Translation: Angel Alvarez. 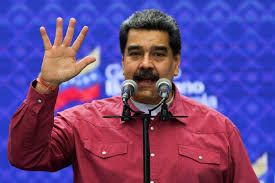 In an appearance before the U.S. Senate Foreign Relations Committee on Aug. 4, the White House representative for Venezuela, Elliott Abrams, said that his country was “working hard” to get Nicolás Maduro to resign from the presidency of the South American country before the end of the year.

Abrams, whose track record allows him to be characterized as what in the United States is called a “loser,” once again failed in Venezuela. Today, Jan. 20, Nicolás Maduro is still in Miraflores, while Donald Trump, Abrams’ boss, is leaving the White House.

At the aforementioned hearing entitled “Venezuela in Maduro’s Grip: Assessing the Deteriorating Security and Humanitarian Crisis,” Abrams stated that he hoped that Maduro “would not make it through the year” and added that “they were working hard to make that happen.” Well, it seems that either he did not work very hard and was satisfied with believing the fantasies inspired by the obsolete Venezuelan opposition, or, despite his hard work, the Venezuelan people, its government and armed forces triumphed anyway.

In the same appearance, this criminal, who was convicted for his role in the Iran-Contra scandal while serving in Ronald Reagan’s government, pointed out that Maduro’s fall depended on the Venezuelan people’s rejection of the results of the parliamentary elections held last December. The truth is that there were elections in Venezuela; a new National Assembly was elected, and Nicolás Maduro has already attended it to deliver the report and account of his administration for the year 2020, something that Trump will not be able to do.

In a previous interview he gave on April 22 to journalist Elizabeth Fuentes, published in the journal El Cooperante, Abrams outlined some guidelines of his plan for Venezuela. Understanding that a future for the country is not possible without the Bolivarian National Armed Forces (FANB), and in spite of all the defeats the FANB inflicted on the empire’s strategy, Abrams resorted to his baser instincts by affirming that “a Venezuela with the Monetary Fund, the World Bank, the United States and the European Union will be a richer country for [the FANB] as well.” It is evident that at Harvard and the London School of Economics, where this recalcitrant Zionist studied, they did not teach him the history of Venezuela.

This article is too short to name all the coups that the United States U.S. has organized and financed around the world throughout its history. And for which the U.S. then gave military, political, diplomatic and economic support to the governments that emerged.

Abrams then candidly stated the U.S. position, to make it clear to the dreamers who still believe that Biden is different from Trump [regarding Venezuela]. In this regard, Abrams said he was under the impression that Democrats and Republicans shared the same position on Venezuela. Lest there be any doubt, he stated “When I talk to the leaders of the Democratic Party in the Senate or the House, there is no difference in our policy on Venezuela.”

He believed that it was very difficult for Venezuela to hold parliamentary elections in December, but if they were to take place, he stated his most desired dream: “. . . Juan Guaidó could easily be elected again . . .”

Last but not least, and to show his traditional aggressive and imperialist disposition, he made use of the usual threat that comes with the statement of any imperialist official. In response to the journalist’s question about a probable military invasion of Venezuela, he said, “All options exist, and it has nothing to do with our policy. It is a fact that in the real world, we have the most powerful and efficient military forces in the world . . .”

No one doubts that the U.S. is the most powerful, but the most effective? For example, let us recall the botched Normandy landing in 1944, which Hollywood always tries to transform into a superlative success; the resistance and victory of the Korean people against U.S. invaders in 1953; the U.S. defeat in Vietnam in 1975; Playa Girón, Cuba in 1961; the ridicule poured on the “super SEALS” in Grenada in 1983 (in which U.S. Naval special forces drowned because they parachuted into the sea, when they thought they were heading for land); and the shooting down of the Black Hawk helicopters in Somalia in 1993.

And more recently the defeat of Israel in Lebanon in 2006; the failure of the U.S. military intervention and bogging down in Afghanistan since 2001; the unanimously approved Iraqi parliament’s request that the U.S. exit the country in 2019, where there is currently a Shia-majority government allied with Iran, in 2019; its the U.S.’s inability to overthrow the government of Bashar al-Assad in Syria; the disaster of the Saudi military intervention in Yemen; the impossibility of militarily intimidating China or Russia; and, of course, the continued survival of the Bolivarian government in taking charge of the destiny of Venezuela.

And this last point despite Washington’s continued choke hold on the governments of Colombia through threatening to expose their leaders’ involvement in drug trafficking and/or paramilitarism. The U.S. forces the Colombians to install military bases surrounding Venezuela, just as the Pentagon has stationed NATO ships in the Caribbean to prevent the arrival of food, medicine and fuel to the country.

What effectiveness is Abrams referring to? It is true that the power he refers to is based on the great resources they possess, and that requires the country to maintain a huge fiscal deficit that, as history has shown us, with time will become unmanageable, producing the fall of the Empire.

In Abrams’ case, we can only speak of a discourse that emerges from his deep and sick hatred towards the people who have been losing their fear. Today they are once again sending him to the scrap heap of history from where he should never have left, and which he only avoided due to the pardon granted to him by George H.W. Bush. There he can meet with Macri, Peña Nieto, Kuzcinski, Vizcarra, Cartes, Temer, Varela and others, hoping that soon Uribe, Duque, Santos, Bachelet, Piñera, Bolsonaro and Juan Orlando Hernández will join them to continue dreaming of the destruction of Venezuela.  [Those are all rightist Latin American politicians — translator]

No one knows if the bipartisan politics that Abrams mentions will keep him in charge. If not, he will have plenty of time to spend holding his grandchildren with his bloodstained hands. But if the Democrats do not want to carry on with his record of defeats and failures, we will be able to say there is one good thing about this change of governance in the United States: We rid ourselves of having to deal with the extreme fascism this individual embodies, as does Pence, Pompeo, Mnuchin and others who are forced to leave.

There will be others — who might even be worse — but no one doubts that at least for one day, while they are in the process of taking over, the world will be able to take a breath in a healthier and safer environment. For our part, here we are, and here we shall remain.