From Brooklyn and Miami to Montreal, Quebec, Canada, as well as Port-au-Prince, Cap-Haitien, Jacmel, Saint-Marc and Gonaïves in Haiti, hundreds of people marched on Jan. 15 to demand that Haitian President Jovenel Moïse follow the constitution and step down next month. 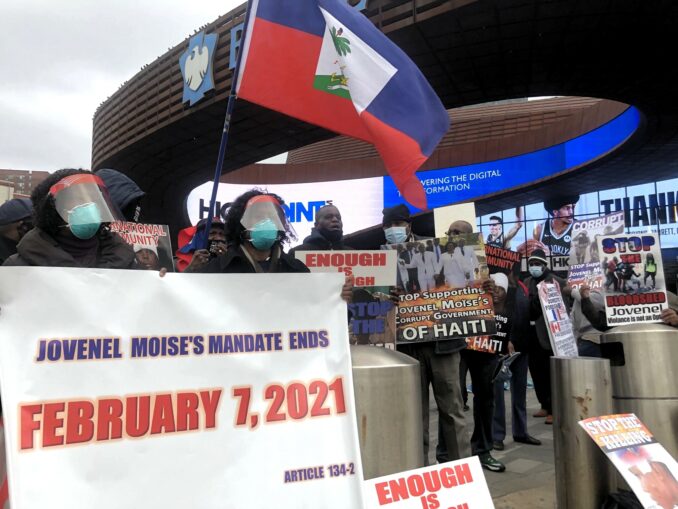 The term of the last president, Michel Martelly, ended in 2016. Most Haitians say that Moïse’s five-year term should end this year. But he is claiming that due to a chaotic process involving an interim president and massive amounts of political maneuvering, he didn’t take office until 2017.

Moïse ignores the fact that while he got 52% of the total vote, the turnout was only 18% of the electorate — meaning that less than 10% of Haitian voters supported him.

Both Moïse and his predecessor, Michel Martelly, are members of the PHTK, a political party that was basically set up to allow the U.S. to intervene in Haitian elections without exposing itself. The U.S. in particular, and also the European Union, have been worried about Haitian elections ever since 1990. In that election, Jean-Bertrand Aristide was able to build a mass movement, which is currently called Fanmi Lavalas, and soundly defeat Marc Bazin, who had received millions of dollars from the U.S.

Moïse has scheduled parliamentary and presidential elections for this September, with a second round in November. They will be preceded by a referendum on a new constitution in April. In the opinion of many Haitian lawyers, these steps are unconstitutional.

Since he was able to dissolve parliament a year ago in January and rule by decree, Moïse has been able to limit the power of the courts to audit the government’s books. He has also declared common protest tactics — like blocking traffic — to be “acts of terrorism” which carry heavy penalties.

The Core Group, which includes officials from the U.N., U.S., Canada and France — who worry that mass opposition could erupt, questions these moves and is pushing for a presidential election sooner than Moïse wants.

The protests in North America were coordinated by the Boston-based New England Human Rights Organization (NEHRO), which partnered with local activists and groups in the various cities — Philadelphia, Miami, Chicago — where protests were held. NEHRO has a history of organizing events in support of Fanmi Lavalas, the party founded by former President Jean-Bertrand Aristide.

NEHRO did not organize the protests in Haiti, which appear to have been led by a coalition of opposition parties.