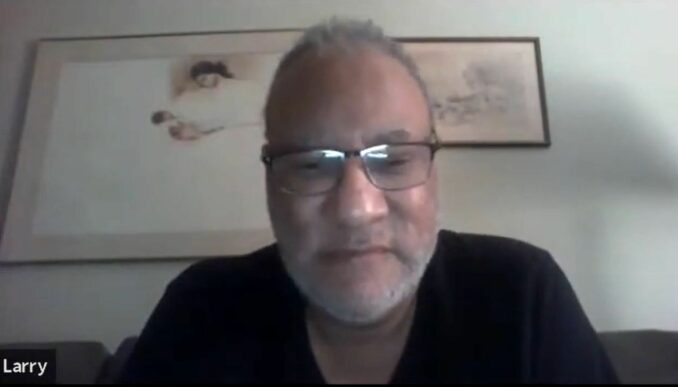 When you consider what’s happened since January 6, you see Washington, D.C., is pretty much shut down under martial law, occupied by the army, that may be going on in other areas of the country.

As a communist, instead of relying on the cops and the army to protect us from these fascists, from these white supremacists, I’d rather see the formation of large-scale, anti-fascist workers’ defense committees. We may very well need to begin organizing that, once it is clear how real the ongoing threat of violent, racist, white-supremacist, fascist attacks are.

On the character of fascism — very, very good learned Marxists have studied the origins of fascism in Europe and elsewhere, and they tend to zero in on the same points.

A fascist movement is a symptom of a deeper capitalist economic crisis that the owners of capitalism do not have a solution to. A crisis that is making it harder and harder for the politicians to govern in the normal way. And the crisis holds the potential of awakening the working class and creating the basis for a major working-class upsurge in the struggle against capitalism — an upsurge, ultimately of revolutionary dimensions.

So hence, the purpose of fascism is to stop the working class from fighting and from challenging capitalism, from making revolution and taking over, by dividing the working class, by confusing, disorienting or demoralizing it. And in some instances, smashing physically its organizations and its leaders and its militants.

The bottom line is the growth of fascism, and whether it succeeds or whether it’s defeated is directly related to the readiness of the workers and the oppressed to fight the capitalist system. If the working class, for whatever reason, is not up to it, and there’s a vacuum — and one could argue that describes the situation to some extent that we have in this country — this is the most dangerous situation regarding fascist developments. What is our response?

Every genuine leftist, every militant, every socialist, communist, even anarchist who is oriented toward the workers and the oppressed, we’ve got to work together like never before to rebuild the working-class movement. And not just talk about it, or have it in our literature, which is fine, or waiting for someone else to do it.

What happened in the Capitol, and many other things before that, is the handwriting on the wall. We’ve got to do whatever we can to rebuild a fighting working-class movement; we can’t waste time, and we can’t wait for someone else to do it.

Fascism, then and now

A form of fascism has always existed in the United States, especially in the U.S. South. This was white supremacy, which was not just a cultural thing or a subtle thing, but the law. It was a way to keep Black and Brown people down and in their place, so that white supremacy would be reinforced, and it was also splitting the working class.

And it’s an important thing to study the classic examples of the development of fascism that a lot of Marxists and a lot of other good people have focused on to understand fascism. But U.S. imperialism has its own form of fascism.

And what we’re seeing now has sort of morphed into something bigger that can’t be defined by a region, the South or the Midwest.  It’s developing at a time when U.S. imperialism is losing its status as the head of the global empire. There is the standard of living of many people, who not so long ago considered themselves to be middle class saying that ‘there’s no class struggle in the U.S.’ That’s the [bull—-] that they give you, that ‘we’re a big middle-class country.’

A lot of the masses bought into that, but something happened to them during globalization, neoliberalism, union–busting, the downsizing of wages and the corporatization of the majority. They’re realizing that their status is crumbling, and larger and larger sections of the masses are freaking out.

In some ways, we shouldn’t be surprised, that especially in a vacuum, that there is not being enough of a radical, anti-capitalist, revolutionary, working-class fight-back that has gravity.  In the absence of that, this social crisis creates a vacuum.

We should not be surprised that white supremacists and fascists would fill it, because as they say nature abhors a vacuum — but it informs what we have to do. We’ve got to start organizing in a way that we haven’t before.

It’s my observation that very good comrades in the struggle, different organizations, whether they know organization or not, that their hearts and minds are in the right place. They’re against capitalism; they see the need for socialism; they hope that it will arrive, while they’re still around, or at least for the benefit of the next generation.

But when it comes to actually coming together and doing something serious that could change the situation, they get a little shy, believing ‘we’re too weak; our numbers are too small; let’s talk about it. I don’t know whether we can really do anything.’

If that kind of psychology is part of the movement, we have to warn everyone. That’s not helpful right now. We’ve got to abandon this notion, whether it’s conscious or semiconscious, that we can’t do anything.

History is demanding that we do something. What happened to the Capitol, the election of Trump, and so many other things are warnings. We revolutionaries have to get our act together. And we have to deepen our base in the working class and help workers organize.

Most of the workers are not organized. The organized labor movement is about 8 to 9%.  Most of it is in government. They’ve lost over many decades a lot of organized workers. So we start from that reality that 90% of our class is not organized. And 90% of our class don’t even realize that they’re in the working class. A lot of young people who’ve got bachelor’s degrees, master’s degrees and doctoral degrees can’t get good jobs. They don’t realize as of yet, although their consciousness is in transformation, that they’re part of the working class, maybe even vital parts of it.

The labor movement, the organized labor movement has not opened its arms and welcomed migrant workers. If it was otherwise, the level of the migrant workers would be different. They would be fighting shoulder-to-shoulder, and it would be harder for someone like Trump or whomever in the bourgeoisie to scapegoat them and beat them down.

So now, we’ve got to look at all these issues very, very closely, very hard, and at the end of the day, we have to come up with a plan to organize our class.

I see the handwriting on the wall, and you can’t deny lessons when they’re in your face. Either we start doing something positive and radical to organize our class on a level unprecedented in the history of this country — something like the 1930s if you want an analogy — or our situation and the situation of the working class is going to sink deeper and deeper into crisis.

And there’ll be cause for greater fear of the rise of fascism and also the intervention of the state, which works hand-in-hand with the fascists. Now’s the time we’d like you to join our party. We call ourselves Workers World Party, because we are a party of working people. But whatever you’ve got to do to take that big step forward, we can’t just be worrying about it. We can talk about it, but even that’s not enough. We’ve got to come up with a strategy to rebuild a revolutionary working-class movement. And no matter how weak you may think you are, it’s possible if we start.