Haiti is by far the poorest country in the Western Hemisphere. Yet it has a glorious history as the first independent Black republic and the first nation in the Western Hemisphere to abolish slavery. Also, the Haitian people militantly resisted U.S. occupation from 1915 to 1934 and carried out a mass uprising which led to Jean-Bertrand Aristide’s election as president in 1990. 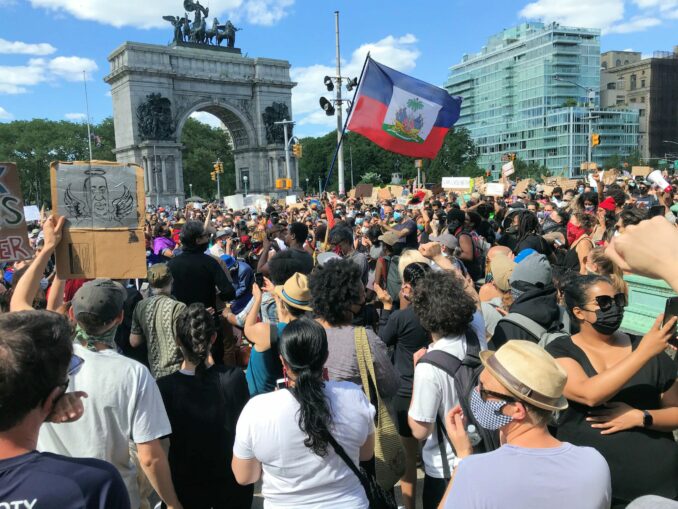 These are some of the historical factors taken into account by U.S. imperialists — whose goal is to continue to dominate Haiti — in order to repress the people’s strong resistance to exploitation and oppression.

In 2019, there were huge, militant demonstrations against President Jovenel Moïse and his Tèt Kale Party (PHTK). It was widely expected that he and his party’s members would be forced out of power.

Splits in the Haitian bourgeoisie over what they should do became obvious, when the national police battled the newly reconstituted Haitian army in several firefights.

But Moïse managed to hang on until December 2019, a month filled with holidays and parties, when people return home to the provinces. Then Washington began maneuvering, probably passing along money or promises of support. The Haitian Parliament’s term ended in January 2020. Moïse had not organized elections so he could rule by executive decree.

In mid-March, COVID-19 entered the picture. The government imposed restrictions to deal with the pandemic, which made it harder to hold massive weekly demonstrations. The official political opposition split into competing factions, which looked to make a deal with a faction of U.S. imperialism.

From January 2020 when Moïse began his “one-man-rule” until January 2021, he has issued 38 presidential decrees, 44 executive orders and 110 arrêtes, which set rules for how certain procedures are carried out.

One recent decree established the domestic National Intelligence Agency (ANI), which is accountable only to the president. The agency is allowed to interrogate, search, confine and arrest any Haitian citizen, subject only to his control. (Haïti Libérté, Dec. 30.)

Another decree, pretending to reinforce public safety, redefines “crimes” like theft, throwing garbage, burning barricades on roadways and destroying public and private property as terrorism, punishable by a hefty fine and 30 years to 50 years imprisonment. Most big protests in Haiti will be confronted with this law as defined by presidential decree.

Some Haitian militants have compared how Moïse is using decrees to how former dictator François Duvalier used decrees in the six months before he proclaimed himself “president for life” in 1964. In the Dec. 21 Miami Herald, Samuel Madistin– a respected academic, civil rights activist and former senator in Haiti’s National Assembly–is quoted as questioning if the current president is paving the way for a dictatorship.  (tinyurl.com/yyo8jhp6)

Moïse used one reading of Haiti’s constitution to say that his term ends in February, but now claims the document permits him to rule until 2022.

Both the U.S. and European Union have pressured Moïse to hold elections this year, but their motives are not altruistic. They keep up the pretext of promoting “democracy,” but the imperialists’ real concern is how best to maintain their grip on the Caribbean country and exploit the people and their resources.

Taking to the streets

While the number of demonstrations in 2020 fell below the frequency and intensity of those held in 2019, some major protests still took place. On Nov. 18, two demonstrations took place in the capital of Port-au-Prince commemorating the anniversary of the Battle of Vertières, in which the Haitian army decisively defeated the French army in 1803.

One demonstration, led by Moïse Jean-Charles’ Dessalines’ Children, a progressive political party, marched on the U.S. Embassy in Tabarre. The other, led by the Popular and Democratic Sector (SDP), proceeded through the city towards the National Palace, Haiti’s equivalent of the White House. But police roughly dispersed and shot at protesters. SDP members asked President-elect Joseph Biden for help, since President Donald Trump supported Moïse. (Journal de Montréal, Nov. 18, 2020)

Haiti’s anti-imperialist left continued protesting through the year. On May Day, International Workers Day, the Coalition of Political, Union and Popular Organizations moved through Port-au-Prince, calling for a $15.30 daily minimum wage and other progressive demands.

The struggle for justice and an end to poverty continues in Haiti.