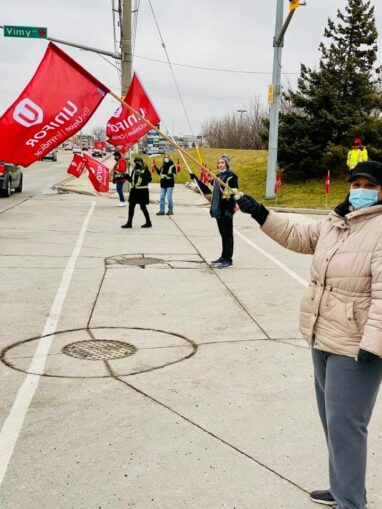 Since Jan. 5, Unifor Local 444 has blockaded the FCA minivan plant in Windsor, Ontario, Canada. Plant workers normally build 830 Chrysler Pacifica vans per day. The blockade of entry and exit gates will prevent minivans from being driven off the assembly line, when production resumes Jan. 11 after the temporary idling around the holidays.

At issue is FCA’s contract with a third party whose workers drive the assembled vehicles off the line. When its contract with Auto Warehouse Company expired, FCA did not renew it, instead giving the work to another company, Motipark.

Motipark is refusing to honor the successor clause — meaning any new company that takes over the work has to abide by the collective bargaining agreement in place — in the Unifor contract. This means that about 60 Local 444 members will lose their jobs. Wages at Motipark are as much as $5 an hour (Canadian) less than at Auto Warehouse Company. Motipark refuses to negotiate with Local 444. This is a just fight for job security and decent union wages.

Unifor was founded in 2013, when the Canadian Auto Workers joined forces with the Communications, Energy and Paperworkers unions. Local 444 represents FCA workers at the Windsor assembly plant, as well as third-party workers who perform “auxiliary” work, such as cleaning or driving vans off the line and onto trucks. Unfortunately, the struggle to keep Unifor jobs pits Local 444 against the Teamsters, who currently represent Motipark workers.

Local 444 is in a difficult position now due to previous concessions made, including allowing outsourcing to third-party companies of work previously performed by then-Chrysler workers.

The right to a job: basis for classwide solidarity

The blockade is taking place at a critical time for FCA workers worldwide. The merger of FCA (formed by the merger of Fiat and Chrysler) and PSA (maker of Peugeot and Citroen that acquired Opel and Vauxhall from General Motors in 2017) has just created Stellantis, the world’s fourth largest vehicle company by the volume of vehicles produced. At the top of Stellantis’ agenda will be consolidation of operations and eliminating jobs considered “redundant.”

The merger comes as production is beginning to shift to electric vehicles, which have fewer parts and thus require less labor time to build. This makes it all the more necessary to raise the demand for a shorter work week — with no cut in pay. Otherwise, all the cost savings that will come from reducing the workforce will go to the bosses in the form of even higher profits.

In the 1990s, the Canadian Auto Workers — which originally broke with the United Auto Workers because the UAW was agreeing to too many concessions — was able to get the Windsor plant workday reduced from 8 to 7.5 hours, with no cut in pay. The plant added a third shift, which created more jobs.

Now there is an urgent need to raise slogans such as: “Six hour day! No cut in pay!” Worldwide class solidarity is the weapon that can save jobs.