Jan. 10 — On Jan. 3, gunmen abducted and executed 11 coal miners, all of whom belonged to Pakistan’s Hazara community. 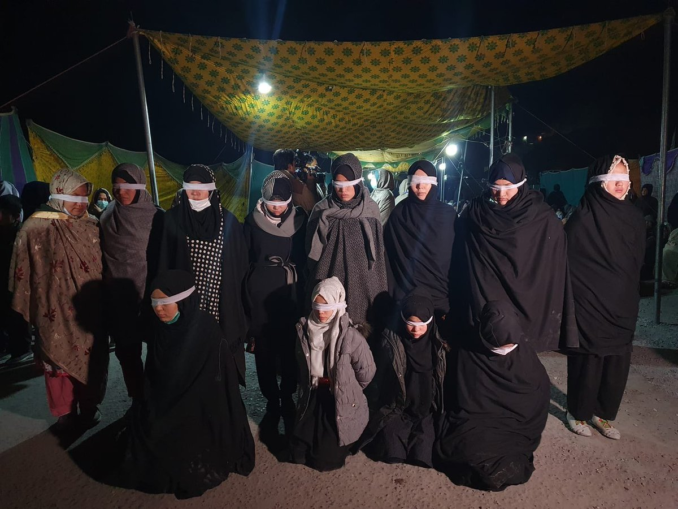 Hazara women protest ongoing genocide against their community and the murders of Hazara workers in Pakistan. Credit: Tooba Syed via Twitter

Responding to yet another targeted attack, the Hazara people in Balochistan arranged the martyrs’ coffins in the middle of a highway in Quetta. They created a list of demands, one being that Prime Minister Imran Khan visit them and witness the effects that repeated intentional killings has on a community. Moreover, the Hazara people stated that if their demands were not met, then they would not bury the dead.

In response to the Hazara community’s actions, Prime Minister Khan rejected their demand that he visit them, saying, “No country’s prime minister can be blackmailed like this . . . [b]ecause then everyone will blackmail the prime minister of the country.”(Al Jazeera, Jan. 8)

The Hazara people refused to compromise, and hundreds remained on the highway for six days — sleeping in freezing temperatures and mourning their unburied loved ones. A group of Hazara people engaged in a hunger strike and explained that they were willing to continue until death if Khan did not apologize for insulting their grieving community. Ultimately, Khan conceded to their demands.

Ongoing persecution of the Hazara people

To understand the significance of the events taking place over the past few days, it is important to contextualize the ongoing persecution of the Hazara people and critically assess the Hazara community’s crucial movement work.

The Hazara people’s place of origin is Hazarajat, a region in Afghanistan. In the late 19th century, the Hazara people launched a series of uprisings against Amir Abdur Rahman Khan, one of the British empire’s pawns, who attempted to bring Hazarajat under his control. Reports indicate that to crush the uprisings, Amir Khan engaged in genocide against the Hazara community, eliminating 60% of their population and enslaving thousands. (tinyurl.com/y3mhzd4n)

In recent years, growing sectarian violence has brought a resurgence in systematic violence and genocide against the Hazara people. Pakistan’s National Commission for Human Rights states that “the greatest burden of sectarianism is borne by the Shia Hazara community of Balochistan” and reports that since 2004, over 2,000 Hazara people have been targeted and murdered. (NCHR, Feb. 2018)

While the Hazara people are exposed to severe physical violence, they are subjected to incredible structural violence. Balochistan has the highest poverty rate in Pakistan, but is rich in mineral deposits. Moreover, the state’s depletion of Balochistan’s natural resources is extensive.

Along with mineral exploitation, people are exploited. According to Pakistan Central Mines Labor Federation, coal miners typically “begin work at the age of 13. By the age of 30, they are forced into unemployment due to chronic respiratory illnesses, tuberculosis, loss of eyesight, injuries, etc.” (Peoples Dispatch, Feb. 3, 2020)

Like all workers belonging to oppressed communities, the Hazara people who were mercilessly murdered were largely ignored by the state. Under capitalism, it is easy to disappear those whose labor is deemed inconsequential and unimportant. The state’s motive is maintaining economic control over Balochistan’s natural resources. The Hazara people are merely a vessel used to serve the state’s interests.

Examining Prime Minister Khan’s statements, it’s apparent his remarks were rather unremarkable. His apathetic attitude and callous comments, directed at a community that is both grieving and bleeding, reflect the ruling class’ notion that workers are replaceable and disposable. However, his response to the Hazara people’s demands is significant, because it exposes ruling class fear and the pervasive truth that liberation and self-determination belong to the people.

The Hazara community’s commitment to their struggle and their uncompromising principles sparked actions throughout Pakistan. People collectively mobilized in solidarity with the Hazara community, demanding an end to the persecution of the Hazara people. The All Pakistan Pensioners and Labour Tehreek–an alliance of more than 80 trade unions in Pakistan–put out a powerful statement condemning the government’s actions against the Hazara people. (tinyurl.com/yxshlh7a)

The struggle for liberation continues, and there are incredible lessons to learn from the movement building happening in Pakistan. We are in deep solidarity with the Hazara people and with all who are fighting the oppressor’s power and building the people’s power.