The filthy conditions, indefinite incarceration and escalating COVID infections have touched off desperate hunger strikes at three New Jersey county jails. Each  jail operates as a prison-for-profit, renting space at $120 a day for ICE to jail out-of-state migrant detainees.

The N.J. counties use the contracts to generate tens of millions of dollars in revenue annually. Immigrant detention has become a moneymaking “cash cow” raising more than $87 million in revenue.

There are four immigration detention facilities in New Jersey — Bergen, Essex, and Hudson County jails, and the Elizabeth Detention Center, run by CoreCivic, the private prison-for-profit company. The COVID-19 infection rate doubled at the Hudson County Jail in Kearny between Christmas Eve and New Year’s Eve. This is the second spike of infections at the jail; the a spike in Spring led to 60 infections.

As news of the new infections spread, two dozen ICE detainees began a hunger strike to demand their release while they continue their legal appeals. The demand for the immediate release on bond, or supervised release of all ICE detainees with medical conditions or over the age of 65, was a priority. Public health experts have called for decarceration as a lifesaving tool in the fight against COVID-19.

Among reports of egregious conditions, the jails are not responding to medical sick calls; prisoners with diabetes are not given insulin, and there are sick people in units who are not being tested or treated. Prisoners have reported black mold on walls, rat infestations, no disinfectants and lack of heat. Broken phone and video equipment cut detainees off from families and from their legal counsel.

The detainees on hunger strike in Bergen faced retaliation including denial of water, denial of medical care, denial of heat, blocked windows and manipulation from facility staff. Immigration detention facilities have relied on widespread solitary confinement amid this pandemic, exacerbating the harm caused by the virus.

ICE further retaliated against participants in November’s hunger strike by transferring and deporting people. Hunger strikers were shipped away from families and supporters to as far away as Buffalo and Miami. 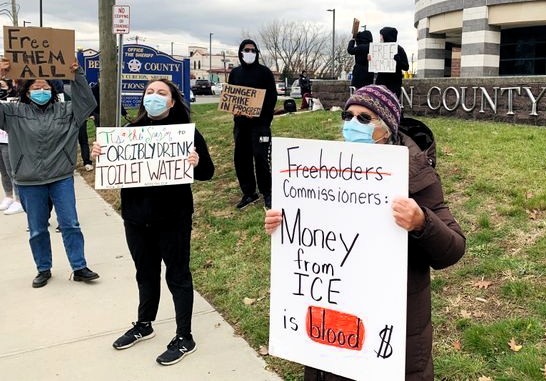 Cars that drove by Bergen County jail honked their horns in support of protesters and detainees on Dec. 1.Credit: Rowaida Abdelaziz

The Fight against ICE contracts

A marathon, nearly 13-hour meeting demanded Hudson County not renew the contract. More than 100 public speakers denounced the board and the county executive for failing to end the contract in 2020 as was promised. In an arrogant response to speakers opposing the prison contract, at the following Freeholder virtual meetings the elected officials closed the meeting rather than listen to speakers as they are obligated to do.

DeGise and four other Hudson County freeholders next obtained a temporary restraining order against five named defendants, associated with the Abolish ICE NY/NJ Coalition, and up to 20 “John Does and Jane Roes.”

A restraining order by County Court Judge Jeffrey Jablonski on Dec. 8 bans protests within 200 feet of the DeGise home. The order limits protests to once every two weeks, with attendance limited to no more than 10 people.

The Essex County Jail in Newark has faced vocal opposition to their ICE contract since at 2010, but protests have increased in frequency and intensity since the pandemic.

Support actions and rallies for the migrant detainees at the Bergen County Jail in Hackensack, N.J., were brutally attacked with smoke grenades and pepper spray, and nine protesters were arrested by county sheriffs on Dec. 12.

The selling of jail space to ICE is an example of how even progressive gains won through struggle are turned on their heads under capitalist financial pressure.

In 2017, after years of public pressure, New Jersey finally enacted the N.J. Criminal Justice Reform Act, eliminating money bail in the state. Formerly hundreds of prisoners were held for months in jail awaiting trial, unable to raise $500 to $1,000 in bail money.

After the act passed, the county jail populations declined 35%. But that did not lead to closing of the jails. Instead the race was on to find new ways to fill the prisons. ICE was only too glad to help.

Every one of the decisions on the detention centers are made by Democratic Party county machine politicians. Based on massive popular pressure against the Trump policy of caging migrant children, liberal Democratic Governor Phil Murphy and N.J. State Attorney General Gurbir Grewal issued a well-publicized directive for state noncompliance with ICE. Liberal Democratic Jersey City Mayor Fulop pushed local noncompliance with ICE. However, both politicians slyly excluded the ICE detention contracts.

The New York Family Immigrant Unity Project (NYIFUP), the nation’s first public defender system for immigrants facing deportation, released a statement on Dec. 29: “With COVID surging in New York, New Jersey, and across the country, releasing all people from immigration detention has never been more urgent . . . The ongoing hunger strike is yet another urgent call to action by detained people taking enormous personal risks to demand justice and safety.”