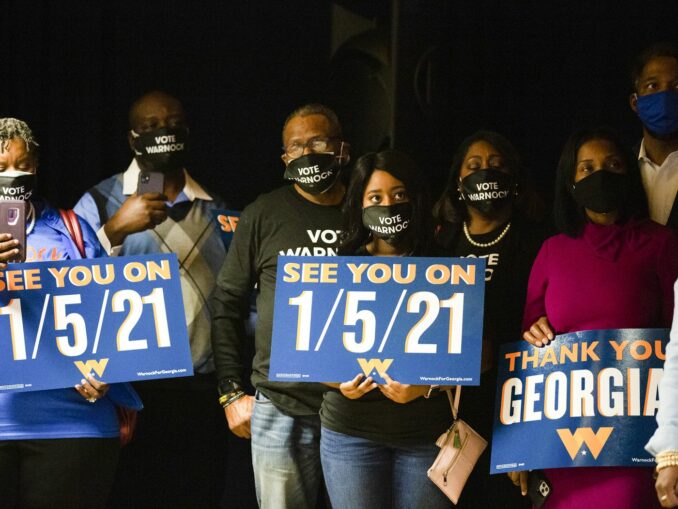 Jan. 6 – Georgia voters made history on Jan. 5 by voting into the U.S. Senate Rev. Raphael Warnock, the first ever Black senator from Georgia.

Billionaire Kelly Loeffler, appointed by Republican Governor Brian Kemp last year to the Senate seat, had launched a vicious ad campaign, labeling Warnock a “radical,” a “socialist,” a “hater of America” and a “supporter of a convicted cop killer.” That last charge referred to Warnock’s strong advocacy for Troy Davis, a Black man from Savannah, Ga., whose racist trial and death sentence had gained international condemnation from hundreds of thousands of people, including the Pope. Despite evidence Davis was innocent, Georgia executed him on Sept. 21, 2011.

Jon Ossoff was the other winning Democrat running for a Senate seat. He was also red-baited by incumbent Sen. David Perdue, a wealthy businessman and cousin of former Gov. Sonny Perdue, now Trump’s Secretary of Agriculture. Ossoff, the head of a documentary film company, was described as being in the pay of the Chinese Communist Party because of royalties paid to his company for a film shown on Chinese television. Perdue ads depicted Ossof, who is Jewish, with an elongated nose — an anti-semitic trope.

Both Republican candidates had tied themselves securely to Trump’s accusation that “rigged” elections were responsible for his defeat in the presidential election in Georgia.

Both Democratic candidates, on the other hand, emphasized control of COVID, financial support for unemployed and impoverished workers and their families, living wages, healthcare and education. Their television ads showed them at demonstrations and rallies for social justice. However, they denied any support for defunding the police.

Back in 2018, Stacey Abrams, an African-American, had run for governor on the Democratic Party ticket. She narrowly lost to Brian Kemp. She recognized the importance of going beyond the official Party apparatus. She engaged the many grassroots and community organizations that had mobilized millions against police violence and low wages, and for healthcare and immigrant rights, to become the ground troops for electoral victory.

Sustained outreach to young people, communities of color, women, LGBTQ2S+, gig and other low-wage workers resulted in hundreds of thousands of first-time voters who want systemic change and who used this election to say that.

It is reported that some $833 million was spent on this run-off to bring thousands of Democratic Party workers to Georgia, to pay for the non-stop TV ads, the flyers stuffed in mailboxes, the endless robo calls and texts and more.

The oft-repeated explanation for all this is control of the Senate. If Perdue and Loeffler had won, Republicans would have held a 52-48 majority.

Now, however, with Warnock and Ossoff in the U.S. Senate, there is a 50-50 split, with Vice President Kamala Harris a potential tie breaker.

But let’s look at a class truth. Both Democrat and Republican parties are capitalist political parties which support the for-profit system and are united in maintaining U.S. global and political domination. It must be noted that in the midst of the massive unemployment and death from COVID, most Democrats and Republicans in Congress had no problem authorizing the largest military budget ever to ensure the superior armed might of U.S. imperialism.

The Senate in particular remains a chamber of huge wealth with few members of color or women. Their ties go deep to the biggest corporations, banks, oil and gas interests, pharmaceutical companies and other elements of the ruling class.

Tens of millions voted to get Trump out of office, and unprecedented millions in Georgia voted to get rid of right-wing Perdue and Loeffler, in hopes of gaining some relief from the unrelenting scourge of the pandemic. And Democrats may feel the pressure to offer a modicum of change to maintain their positions in office.  Certainly, the energized grassroots organizations will continue to fight for their demands.

The class truth, however, is that  the capitalist, for-profit system will never provide the people all they need and what is rightfully theirs. We need system change!