The second stimulus package finally passed in both houses of Congress Dec. 27, accompanied by much controversy. It woefully fails to provide any meaningful support for the millions of workers and their families teetering on the edge of economic disaster. 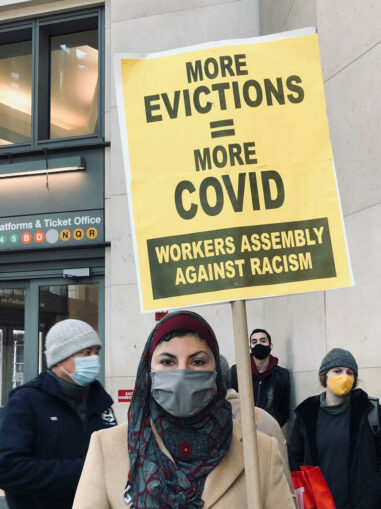 The bill was delayed for a week, when Trump demagogically demanded that stimulus checks be increased from $600 to $2,000, knowing that would be shot down by the millionaire Senate. This impasse caused millions of unemployed workers to lose a week’s worth of benefits, which the bill increased by a miniscule $300.

Senate Majority Leader Mitch McConnell (R-Ky.) led the charge against this increase, stating that $2,000 would “fall into the hands of Democrats’ rich friends who don’t need the help.” (Washington Post, Dec. 30) This heartless statement was a slap in the face to all poor and working people.

Kentucky, the state McConnell represents, is home to 10 of the 25 poorest counties in the U.S. (courier-journal.com, March 13)

According to Census Bureau survey data, more than 27 million adults stated that they did not get enough to eat from late November to early December. And, of course, these astounding numbers do not take into consideration undocumented workers or children.

What does this $900-billion bill passed by Congress include? Along with stimulus checks that began to be issued Jan. 1, other provisions include the extension of unemployment benefits until mid-March and an extension of Pandemic Emergency Unemployment Assistance, which allows those who have exhausted their state benefits, including part-time and gig workers, to get an additional 13 weeks of unemployment benefits. Workers have until Jan. 31 to apply for these benefits.

There is an extension of the moratorium on evictions until Jan. 31. Joe Biden will have the authority to further extend that once he takes the oath of the presidency on Jan. 20. And there is an additional $25 billion in assistance for renters. The Aspen Institute Financial Security Program and the Covid-19 Eviction Defense Project have estimated that upwards of 40 million renters face eviction due to the impact of the COVID-19 pandemic.

The bill allots $20 billion for the purchase of coronavirus vaccines, supposedly to make the vaccine available to anyone who can’t afford it. There is a provision that provides $8 billion for vaccine distribution, which includes $20 billion to assist states with coronavirus testing.

According to forbes.com, over 163,000 U.S. businesses have closed since March 1. This staggering figure represents an increase of 23% over last July 10, when the count of closures was over 132,000.

As far back as Sept. 16, some 32,000 restaurants had shuttered since the start of the pandemic, with 61% of closures expected to be permanent. Nightclubs and bars, a smaller market, had lost more than 6,400 businesses, over half permanently, while retailers had seen 30,374 closures.

On the flip side, Congress passed a U.S. military budget amounting to $740 billion. This represents 15% of the overall federal budget for 2021 and doesn’t even include wars of occupation like Afghanistan or the $500 million aid to apartheid Israel. The U.S. spends more on its military than China, Russia, India, Saudi Arabia, France, Germany, Britain, Japan, South Korea and Brazil combined. (Peter G. Pederson Foundation)

The coronavirus vaccine, which is finally starting to trickle down to millions of people in the U.S., has not prevented a resurgence of the pandemic, which has now killed over 360,000 people and affected an estimated 20 million more. Hospitals have run out of beds and make-shift morgues have been created to store the dead. And this is on top of the millions of people suffering from unemployment and hunger.

But there is one small clique that has enjoyed the outcome of the pandemic. They are the Wall Street billionaires and the corrupt system that drives them. Profits for the big corporations have been soaring during the pandemic, as they fill the void left by the demise of small businesses.

In fact, 45 out of the 50 most valuable U.S. trading firms — like Walmart, Salesforce, Cisco Systems, Netflix, Zoom and PayPal — have reported a profit since last March. Twenty-seven of those firms have laid off a combined 100,000-plus workers. (Washington Post, Dec. 16)

To add insult to injury, not only have large corporations been the main culprit in the mass layoffs of workers, but they have benefited greatly from tax breaks in the billions of dollars, thanks to their millionaire Republican buddies in the Senate and compliant Democrats.

“The markets are dominated by the folks who are in the upper echelons. They don’t feel any pain. They read about it, but they don’t experience it. What they do experience is the flip side: We have had very substantial productivity gains with Zoom and other daily life efficiencies,” commented David Kotok, founder of Cumberland Advisors.

What this pandemic has exposed in stark reality is that capitalism is an economic system that cares more about raking in profits for big business and its super-rich CEOs than for the well-being of the billions of people who inhabit the planet and struggle on a daily basis for jobs, shelter, food, health care, education, land and equality.

Only a full transformation of society from capitalism to a socialist economic system will lay the basis for meeting people’s needs, by empowering the global working class to end the nightmare of capitalist greed and war once and for all.