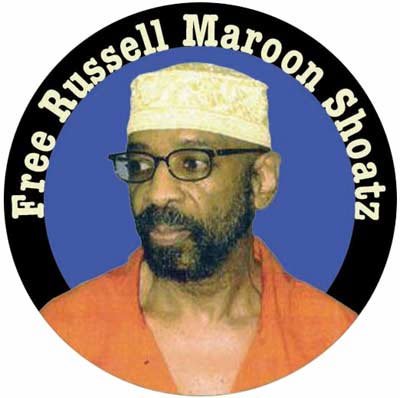 Since 1972 — nearly half a century ago — Russell Maroon Shoatz has languished in a prison cell built on stolen land, poisoned and irradiated by the fossil fuel industry.

A Black Panther Party member and soldier in the Black Liberation Army, Shoatz was falsely accused of killing a cop in the Cobbs Creek area of Philadelphia in 1970.

His family, pillars of their community, have tirelessly fought for his release and carried Maroon’s revolutionary message through the years, whether in solidarity with MOVE, Mumia Abu-Jamal, George Floyd, Walter Wallace Jr., or other struggles demanding justice.

After 48 years of imprisonment, Shoatz, 77, is currently held at SCI Dallas in Luzerne County, Penn. In 2015 the state Department of Health found the cancer rate there was “significantly higher than expected.” Shoatz survived prostate cancer only to develop Stage Four colon cancer in 2019. In November, he tested positive for COVID-19.

Shoatz described conditions in the prison COVID unit in a recent phone conversation. “I’m looking at 22 [people] who look like [they’re in] a refugee camp. For real. And they got one toilet.

“I’m supposed to be in a single cell. I reported to the nurses. I reported to the guards. Everyone says they can’t do nothin’ about it. They might not. But that’s not my concern. I got to be able to get to the toilet. … I can’t be sick, messin’ on myself.

“I’m trying to be patient with it.”

The utter horror and indignity of the situation Shoatz is enduring shocks the conscience. To hear it firsthand, from an elder ill with a life-threatening disease, is even more painful. But it must be heard.

A recording of Shoatz’s call was broadcast at a Dec. 11 on-line teach-in for Russell Maroon Shoatz, “We Are Maroon!” hosted by Kempis Ghani Songster and Lavinia “Vee” Davis. They emphasized the fact that prison conditions always have created illness, even before the new coronavirus was brought in by guards – immediately sweeping through the population of incarcerated workers.

MOVE 9 member Mike Africa, Sr., spoke at the event: “If you’re in a state like Maroon is [with cancer], it’s especially crucial that he gets the nourishment he needs to battle that disease. That they don’t give it to him is just some cruel stuff. And they know it.

“I myself became anemic in there trying to eat. And I was working in the kitchen and I still became anemic! Because I wasn’t getting the nutrition I needed.”

Emphatic in MOVE’s philosophy, which is centered on life and the protection of living creatures, is physical fitness and maintaining a healthy, just diet. Africa Sr., like many MOVE members, is an avid athlete who, Mumia Abu-Jamal said, “could run like others walk.” But even the MOVE 9 have experienced life-threatening health problems as the result of decades incarcerated in toxic Pennsylvania prisons.

Chuck Africa, the last of the MOVE 9 members released in early 2020, contracted cancer after 42 years in prison. Prison conditions killed both Merle Africa and Phil Africa before they were eligible for parole. Delbert Orr Africa died in June 2020, only six months after his release.

Mumia Abu-Jamal has nearly had his life stolen by the prison-industrial complex many times. After being shot by police and then brutally beaten in 1981, he was one of hundreds of people incarcerated in Pennsylvania to contract hepatitis C, a disease running rampant in the state’s prisons. Finally, in 2017, after a protracted legal battle won by Abu-Jamal and supporters, the state’s Department of Corrections was forced to provide hep C treatment to prisoners in its custody.

Abu-Jamal has also suffered with cirrhosis of the liver, various skin rashes, cataracts and other issues. Supporters have waged massive political and legal struggles to get even basic treatment for each of these symptoms.

To frame Black activists, Frank Rizzo used a well-known recipe – blaming revolutionaries for the death of cops. Marxist-Leninist political theorist George Jackson, who co-founded the Black Guerrilla Family, was accused of killing a prison guard after his transfer from San Quentin to Soledad prison in 1970. Black Panther members Albert Woodfox and Herman Wallace were falsely accused of killing an Angola prison guard in 1972, and then held in solitary confinement for 40 years — the longest known case of this torture method in U.S. history.

“Cop killing” was the charge used to take out Maroon’s Black Liberation Army comrades Sekou Odinga and Mutulu Shakur, in separate incidents in 1981. In 2000 the state finally got its hands on Imam Jamil al-Amin (the former Black Panther H. Rap Brown) by blaming him for shooting a cop.

History proves that the capitalist state ruthlessly eliminates any challenge to its power and authority. After the Civil War, in the fascist counterrevolution against Reconstruction, the re-unified U.S. capitalist class empowered the Ku Klux Klan, law enforcement and local white property owners to target and kill anyone organizing for Black power in the U.S. South.

By the mid-20th century, the organized labor movement in the U.S. – once a militant front against imperialism and exploitation – had been quite literally beaten into submission by mercenary Pinkertons, cops and McCarthyite persecution. In the 1960s and 70s, the political police force known as the Federal Bureau of Investigation identified the Black liberation struggle and the Black Panther Party as the greatest domestic threat to the U.S. empire, as well as targeting the American Indian Movement and those it identified as its leaders.

When assassination is not an option, the capitalist state will carry out executions in the many prison concentration camps it operates for this purpose. During the final days of the Trump administration, the U.S. federal government has revived the death penalty and is killing federal prisoners at a sickening rate.

Other executions have been stopped by legal challenges or political pressure – as in the case of Mumia Abu-Jamal, rescued from the death chamber through the power exerted by millions of people who took to the streets internationally.

But imprisonment itself is a form of execution, a cruel and torturous and gradual method.

The toxic, unsanitary conditions in prisons mean that the continued imprisonment of Russell Maroon Shoatz and other human beings is an atrocity. This is an even more urgent truth during the coronavirus pandemic. In a system of mass incarceration that reportedly holds 2.5 million people in cages on any given day, over 275,000 U.S. prisoners are reported to have contracted COVID-19. That’s ten times the infection rate worldwide.

To say that U.S. prisons are concentration camps is no exaggeration – it is historical reality. Mass death through a policy of willful neglect in U.S. prisons is written all over this moment. It compares to the Spanish imperial Reconcentration Policy in Cuba, when 30 percent of those forced into enclosures died, to the U.S.-operated reconcentrados or “zones of protection” in the Philippines, and to the Israeli occupation of Gaza.