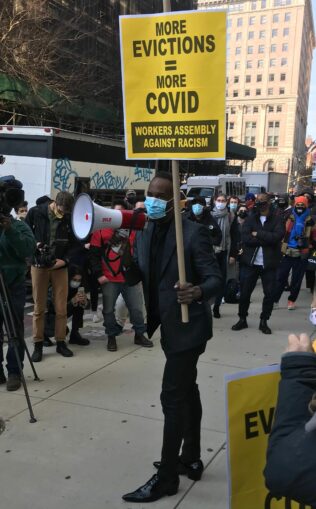 With the looming Jan. 31 expiration of the federal ban on evictions — and landlords already evicting tenants — protests, stoop defense and militant housing actions are spreading.

In Brooklyn, a Dec. 11 downtown protest that began at housing court made the just demand to stop all evictions during the twin pandemics of COVID and joblessness. Ralliers were met by violence and arrests by the NYPD. The crowd of about 50 people faced dozens of police, two helicopters and at least ten police vans. Cops put 20 people in jail, one of them an 80-year-old woman.

Dozens of people mobilized jail support and cheered protesters when they were released from jail later that night. Their arrests and detention also exposed them to COVID. A video of the police attacking the anti-eviction protesters went viral.