In big cities like Athens and Thessaloníki, and smaller ones like Larissa and Patras, workers in Greece struck and marched by the thousands Nov. 26 to defend workers’ wages and benefits. Their actions defied government restrictions, made under the pretext of responding to COVID-19, which limit gatherings of more than three people. 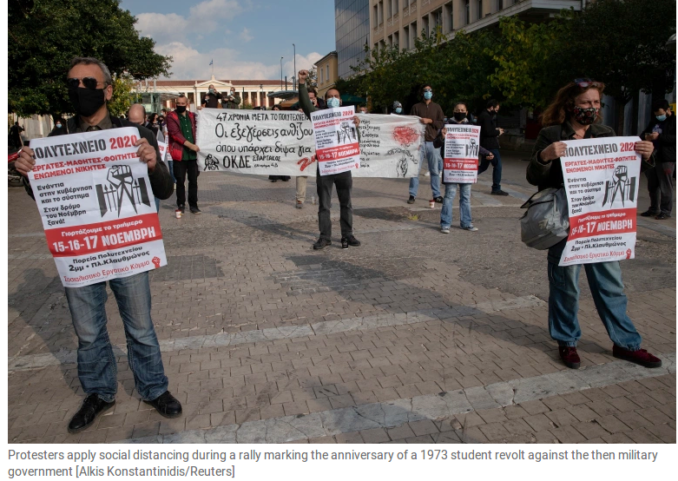 The Greek government has introduced bills into parliament, at the behest of big business, which require workers to accept a 10-hour work day while only getting paid for 8 hours, along with substantially lower wages and Sunday work. Social security will be privatized, along with public facilities such as transportation systems.

A decade of austerity imposed by the IMF and the big European and U.S. banks has shrunk Greece’s economy by at least 25%. The impact of COVID-19 has produced a 10.5% drop in its GDP in 2020. The Greek capitalists need every euro they can extort from Greek workers.

Dozens of union federations, labor centers and trade unions across the country went on strike, responding to the call from the All Workers Militant Front (PAME). Among them are federations of hospital doctors and other medical workers, construction workers, workers in the pharmaceutical industry, and the labor centers of Athens, Piraeus, Patras and dozens of other cities.

The unions representing marine workers — particularly important in a country with so many islands — held a 24-hour nationwide strike in all ship categories, while the workers of the Athens urban transport also participated in the strike.

PAME has demanded benefits — without terms and conditions — for all unemployed workers, revoking all illegal layoffs during this COVID-19 period and ending any further job furloughs. PAME and the unions supporting its call also demand no cuts in employment rights and a moratorium on bank payments, along with free electricity, gas, water and communication services for workers in quarantine.

Protesting health workers have demanded more hospital beds, including intensive care units, additional diagnostics and laboratory centers, as well as the mass recruitment of doctors of all specialties and nursing staff. A key demand is that the government ensure sufficient infrastructure and personal protective equipment.

Greece held infections low during the first COVID-19 wave in Europe, with just hundreds of cases and dozens of deaths. However, starting at the end of October, cases and deaths began to spike. As of Nov. 29, Greece, whose population is just over 10 million, has 104,722 cases and 2,321 deaths, according to the Worldometer website.

Videos and pictures, as posted on the PAME website and Flickr albums, show that the Nov. 26 protests complied with proper COVID-19 precautions. Protesters were masked and, except those carrying banners, observed proper distances.

PAME is calling on all workers to react to the government and employer attack, to leave no one out of this struggle, to dismiss all fear, intimidation and pessimism and let the strike message reach everywhere, every workplace! (tinyurl.com/yylcnkoj)

In November before the general strike, a struggle broke out around commemorating the 1973 occupation of Athens Polytechnic University. At that time,  a coalition of students and workers was protesting the military dictatorship led by army colonels, who had acted in a U.S.-NATO plot to seize power in April 1967.

The military used tanks then to crush the university occupation, which had gained a tremendous amount of popular support. The reaction to this massacre led to the fall of the Colonels’ dictatorship in 1974.

The commemoration of the Polytechnic occupation has drawn thousands of supporters in past years, but the current right-wing government tried to ban the traditional march from the Polytechnic to the U.S. embassy. A coalition of the social-democratic Syriza, which led the government from 2015 until July last year, the Greek Communist Party (KKE) and Mera25, founded by former finance minister Yannis Varoufakis, put up such a storm of protest that even the conservative Prime Minister Kyriakos Mitsotaki had to lay a wreath at the Polytechnic.

Greek workers continue to protest for their rights and lives despite the reactionary regime and the pandemic.