As we are hit by a second wave of the pandemic, the causes of the 266,000 U.S. deaths of COVID-19 must be exposed. It is not because of the virus alone that the U.S. has become the world’s leader in number of deaths. It is the capitalist system and its for-profit health care industry. 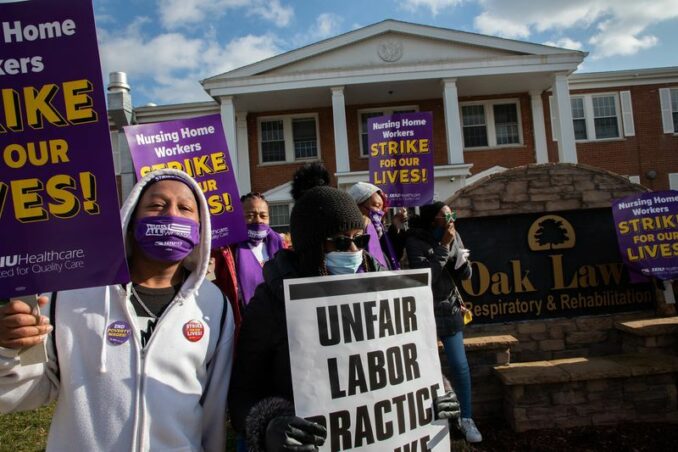 This is especially true in the country’s nursing homes, where 77,000 workers and residents have died of COVID-19 this year. Nursing homes and other long-term care facilities house about 1% of the U.S. population but have about 40% of COVID-19 deaths. (tinyurl.com/y423a84p)  More than 1,300 nursing homes reported having three or more cases as of the first week of November. New cases are especially rising in the Midwestern states with 1,473 in Illinois, 1,399 in Ohio, 1,353 in Texas and 1,206 in Missouri.

Large numbers of nursing homes report staff shortages and are still struggling to get personal protective equipment and have workers and residents tested. The national stockpile for PPE is running low.

Victoria Richardson is a staff assistant earning $14 an hour at Forest View Rehabilitation and Nursing Care, run by Infinity Health Management in the Chicago area. Richardson lost her husband to cancer in September and struggles to pay her bills.

COVID-19 has killed 18 residents at Forest View. After owners took away hazard pay and were not supplying adequate PPE, Richardson and 700 other members of the Service Employees union recently went on strike and won the hazard pay back and PPE!

The epidemic has hit Black and other communities of color especially hard. A Washington Post study of two dozen states found that the death rate was 20% higher where a majority of nursing home residents were Black than if a majority were white. At 250 predominantly Black homes, more than 2,200 residents have died from COVID-19.

On top of the 77,000 COVID deaths caused by this ageist attack against seniors and workers in nursing homes, tens of thousands more have died because overburdened workers can’t give the care they need. For every two in long-term care who die consistent with the normal rate of death, it is estimated that one more dies prematurely due to other causes. These are “excess deaths.” (tinyurl.com/y46wjvuu)

Since early in the pandemic, nursing home visitors and government inspections have been halted — in normal times nursing home residents have regular contact with people who can advocate for their safety.

On top of that, nursing homes are extremely short-staffed. At least 15% of direct-care workers live below 100% of the poverty rate, and nearly half live below 200% of the federal poverty level income, according to PHI, a nonprofit that works to improve long-term care. (tinyurl.com/yyar6rwh) The median wage for direct-care workers is only $20,200 a year.

Many more nursing and other health care workers need to be hired. Their wages need to be greatly increased. We need support and solidarity for these essential workers who daily put their lives on the line. All the nursing homes that have been shuttered in recent years need to be reopened and new facilities built.

COVID-19 is a deadly disease, but the deadly disease of capitalism is worse. We need to fight for the Socialist Demands of Workers World Party for the COVID-19 crisis, including “Free healthcare for all” and “Nationalize the health care system under community control. Build emergency hospitals.”