The year 2020 conjures up a variety of feelings and emotions for people. Some view it as the year of the apocalypse, others have a more optimistic option. Count me in the latter category. I am a completely different person now than I was when the clock struck midnight on Jan. 1, 2020. I am more confident, more politically aware, and more empathetic. 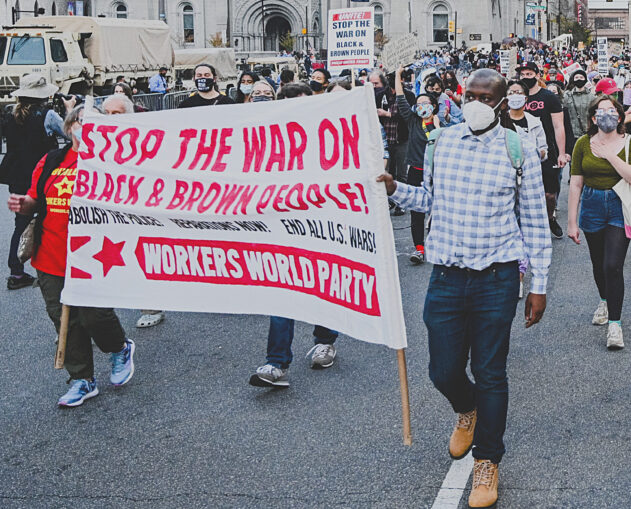 The biggest reason for my personal growth is being a candidate for Workers World Party. Even as a liberal, I admired WWP from afar for their commitment to fighting and dismantling all forms of oppression, even if I didn’t agree with their communist praxis (after all, I was under bourgeois indoctrination).  As I evolved as a leftist and looked to take my political awareness to the next level, Workers World Party came to my mind.

I was already familiar with Leslie Feinberg and Monica Moorehead who were/are in the party, so it made sense to reach out to them. A member of the Philadelphia branch responded, and in an in-depth conversation I told him about my political evolution since the 2016 election. He in turn told me about his journey. I felt a sort of camaraderie from that first phone call that I never had before in a political context. He then invited me to a branch meeting.

At the branch meeting, I was immediately taken by the atmosphere and the environment. The lengths comrades went to in order to ensure that everyone had a voice was phenomenal. I was able to hear input from people from various genders, races and sexualities, which was unlike other organizations I had been a part of where a certain group of people dominated discussions for large blocks of time.

This nurturing environment encouraged me to come to more meetings and it also enabled me to find a voice in ways that I’ve never been previously able to. From asking questions to further my understanding of Marxism, to making suggestions to the rest of the branch, I became bolder and more confident.

An important moment with the party was when I was invited to make a speech as a new candidate of WWP. Having never made a speech of this magnitude before, I was understandably nervous. When it came time to make the speech, the nerves got the best of me and I froze on the spot. I was extremely discouraged with myself for short circuiting at such an important event where the entirety of WWP was in attendance.

If it wasn’t for the encouragement of leading comrades from the Philadelphia branch and the party center, I surely would have ruled out the possibility of speaking on a public platform again, but it only inspired me. The conversations I had with them after my failed speech were further indicative of the nurturing, comradely environment the Workers World Party fosters.

This has given me the confidence to take a more active role in organizing and protesting. If someone told me this time last year I would be on the front lines protesting against police brutality, bourgeoisie exploitation, and imperialist warfare, I would have doubted you. I was never the type of person who had the moxie to speak out against such injustices that plague our world.

That is what happens when you are involved with Workers World. No matter who you are, they will do whatever it takes to help you find your voice. My contributions to the Workers World newspaper have been the culmination of this year of growth. For the longest time, I’ve wanted an avenue to voice my perspective on politics but I didn’t think there was an audience for my views. More to the point, I didn’t think I was much of a writer.

Through writing for the WWP newspaper, not only did I realize there was an audience, I was able to become a better and more confident writer. Working under the mentorship of the paper’s managing editors enabled me to express my opinions and views in a mature and cohesive way and there was no better example of that than my article about the #endSARS movement in Nigeria. If not for one ME’s advice, I don’t think the finished product would’ve been as good as it was, but that is what working with amazing comrades does to your abilities.

I am astonished as to how far I’ve come as a writer and the newspaper staff made it all possible. As 2020 comes to a close, I can’t wait to discover what 2021 holds. Being a candidate for Workers World Party has been one of the greatest experiences of my life and it would be an honor to be a full-fledged party member in the coming year.