Around 50 demonstrators gathered outside the Federal Detention Center at Seventh and Arch streets on Nov. 28 to demand the release of those on the inside – where at least 200 new COVID-19 cases have been reported in less than a month. In the past week, the detention center has reported between 17 to 28 additional positive cases each day.

Protesters also called for the release of incarcerated workers in state and local jails across Pennsylvania, raising up the cases of political prisoners Russell Maroon Shoatz and Mumia Abu-Jamal in particular.

Opening the rally, Ted Kelly with the Prisoners Solidarity Committee of Workers World Party stated that “The most dangerous place to be right now in the U.S. is prison. The pandemic is happening inside this building and unless we do something, people will die.  We need to build a real abolitionist movement to do justice.”

The vast majority of the 1,000 men and women incarcerated at the federal facility have not been convicted and are still pending trial.  In April, the Public Interest Law Center filed a lawsuit seeking to cut down the jail population and allow those most at risk of COVID-19 complications to be released with remote monitoring.  However, rather than being released, the prisoners were put under harsh restrictions: no visits, including from attorneys; limited communications; limited access to legal research; and being allowed out of their cells only three times a week for 30 minutes.

Speakers denounced these draconian measures as cruel and unusual punishment that does nothing to stem the spread of COVID-19, since it is guards and other staff who bring the disease into the prisons. There is now a full-blown resurgence of COVID-19 in Pennsylvania prisons, with outbreaks in 21 of the 23 state facilities.  With unlimited movement within the prisons, the guards become super spreaders. 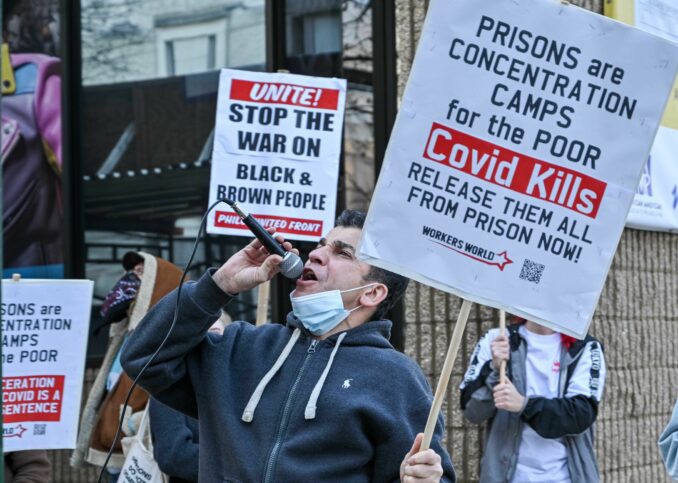 Statements from Russell Maroon Shoatz and his family were read by Megan Murray, also with Workers World.  Shoatz, now 77 and incarcerated since 1972, has stage 4 colon cancer.  On Nov. 11 he tested positive for COVID-19.  Rather than give Shoatz compassionate release, prison officials held him for 10 days in a gymnasium with 30 other COVID-19-positive prisoners, who all share one toilet.  He was eventually moved to the infirmary after advocacy from family and supporters.

Mumia Abu-Jamal, like most prisoners in Pennsylvania, is kept in 23-hour lock-down in his cell, with one hour to shower or make phone calls. Abu-Jamal continues to experience health problems stemming from decades of untreated hepatitis C that have left him with sclerosis of the liver.

Throughout the rally, prisoners inside the Detention Center could be heard banging on windows in response. Several drivers, passing by, also honked car horns in support.