For the second time this year, a class-wide mobilization in an “All-India strike” brought out 250 million workers. With one in four working-age people in India participating, this 24-hour work stoppage can again claim the status of “world’s biggest strike.” The first record-breaking general strike had taken place on Jan. 8. 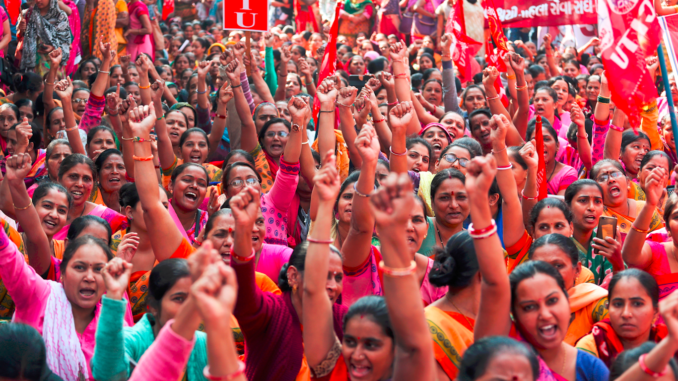 Women played a prominent role in the All-India strike, Nov. 26.

Ten of India’s labor federations took part, uniting under the “joint platform.” Five states — Kerala, Puducherry, Odisha, Assam and Telangana — were completely shut down, while daily activity was curtailed in many others.

Quoting from the joint union statement, it states: “Reports of successful strikes in coal and copper mines, including other mineral resource mines, have been received. The employees of postal, telecom and steel sectors were also in action and gramin dak sevaks [rural postal workers] observed a 100 percent strike.” (tinyurl.com/y4wsthaw)

Strikers held sit-ins and mass rallies, and blocked traffic and train tracks. They burned an effigy of right-wing Prime Minister Narendra Modi. There was massive participation by the unemployed, unorganized, self-employed and informal sector workers, as well as students. Women played a prominent role.

The labor federations’ joint platform put forth demands for a minimum income, food for poor families, a guaranteed number of workdays, higher wages, pensions for everyone, and the end of forced early retirements. It called for the government to stop privatizations and also withdraw all “anti-farmer laws and anti-worker labor codes.”

Additional demands emerged around a range of issues, from ending the outsourcing of work to reimposition of the 12-hour day.  The provision of safety measures to stop the spread of COVID was a key issue, as India has the second-highest coronavirus infection rate in the world. (Worldometers, Nov. 29)

While 250 million workers struck, farmers from all over the country attempted to march on Delhi, the country’s capital. They are protesting a new, pro-corporate agribusiness “farm bill,” but the farmers are also in full solidarity with the workers.

Government forces blocked the farmers’ paths with barricades and barbed wire, and fired tear gas and water cannons in the bitter cold. But, anticipating government-imposed obstacles, farmers packed a variety of supplies, from food and water to cell-phone chargers. These determined farmers refused to move, breaking through blockades until they were allowed to proceed to Parliament and present their demands.

Workers World newspaper will cover more on the class struggle in India in its next issue, to be published on Dec. 10.