The writer is a U.S. Army veteran and was an organizer of the American Servicemen’s Union, 1968-69.

The lawsuit settlement allows fast-tracking of applications for upgrades of bad paper discharges related to these and other mental health diagnoses. 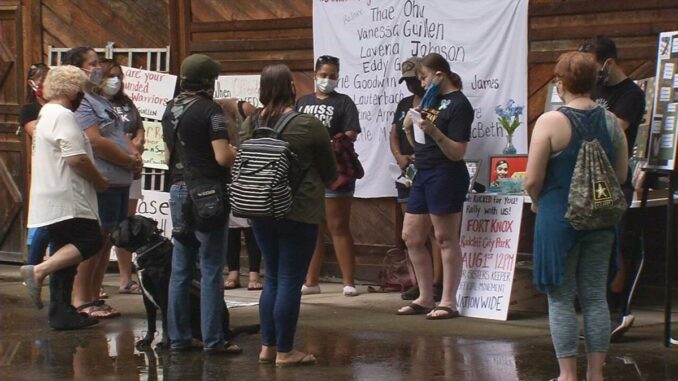 The widespread problem of MST was spotlighted Aug. 1 at a protest in Radcliff, Ky., near the U.S. Army base Fort Knox. It was organized by Our Sister’s Keeper, a national group of veterans united by their survival of sexual assault while in the U.S. military. This protest was one of many held across the U.S. that day in response to the sexual assault and brutal murder of Vanessa Guillen, a Latinx soldier at Fort Hood in Texas. She was killed by a higher ranking soldier in her own unit.

“We did not sign up to be raped,” Army veteran Heather DeBice said. “We’re standing up because we are those victims. We’ve been victimized ourselves.” DeBice said she was raped while stationed in Texas, and that the mental side effects eventually led to her discharge. “I did not get justice,” she charged. “My rapist was transitioned out of the military and went on to offend again.”

“Twelve years later, I’m still destroyed,” another woman shouted through tears. “This is not an invisible war. We have to make our voices heard!” Activists called out the U.S. military establishment for its blatant refusal to acknowledge the scourge of MST committed by male soldiers on female soldiers. (tinyurl.com/y36t34kn)

One in three military women suffer from MST

This month the Veterans Administration reported that one in three women members of the U.S. military have MST, compared to one in 50 men. (mentalhealth.va.gov) According to a just-published U.S. Dept. of Defense report, retaliation against those reporting MST is the norm. Sixty-six percent reported retaliation after filing a sexual assault complaint; 73% of retaliators were above the MST victim in rank. One-third of those reporting MST were discharged within seven months, 24% of whom received bad paper discharges which disallows them VA medical and other benefits, including mental health services. (sapr.mil/reports)

A 2013 study showed 40% of all women homeless veterans experience MST, compared to only 3.3% of men. Veterans presenting with MST demonstrate “a significantly higher likelihood of almost all mental health conditions examined, as compared to other homeless women and men, including depression, post-traumatic stress disorder, other anxiety disorders, substance use disorders, bipolar disorders, personality disorders, suicide, and among men only, schizophrenia and psychotic disorders.” However, veterans with bad paper discharges, among those most in need, were not counted in the study. (Journal of General Internal Medicine, July 2013)

The lawsuit win is, of course, a victory for women veterans with MST-related PTSD and all veterans presenting with mental health diagnoses. However, they still must file claims to upgrade their discharge papers, although representation through the various veterans service organizations, such as Disabled American Veterans, American Legion and others, is free to all veterans. (www.va.gov/vso/)

There are still many hurdles to overcome in the struggle against the patriarchal abuse that permeates the imperialist military and all of capitalist society.