The voters of Michigan dealt President Donald Trump a crushing defeat on Nov. 3 — he lost to President-elect Joe Biden by over 154,000 votes. Black-majority cities, including Flint, Benton Harbor and especially Detroit, were decisive in a state the blatant white supremacist had narrowly won in 2016. In other “battleground” states, the pattern was replicated, with Atlanta, Milwaukee and Philadelphia playing a decisive role in Trump’s loss. 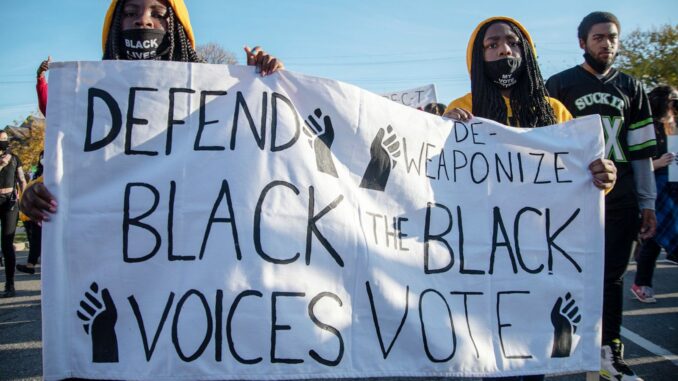 Rather than accept the numbers — which show him trailing in the popular vote tally by over 6 million — Trump and his cohorts, led by racist ex-mayor of New York City Rudy Giuliani, have launched a vicious campaign to disenfranchise Black voters. With the dozens of court challenges all failing to bolster Trump’s bogus case, political maneuvers are being employed to subvert voters’ will.

On Nov. 17, a city with a proud history in the labor and Black liberation movements — Detroit — pushed back.

In Michigan the County Boards of Canvassers, with two Republican and two Democratic members appointed by the elected County Board of Commissioners, certify the election results in each of the state’s 83 counties. The results are then sent to the State Board of Canvassers for approval. This is normally a routine, non-controversial procedure.

Wayne County, whose largest city is Detroit, proved to be the exception. The two Republicans on the Board refused to approve the results, which by law are considered not certified in the case of a tie. But the county had rejected Trump by over 323,000 votes. The excuse given was that there were discrepancies in some precincts between the number of votes tallied and the number of voters registered. All were less than half a dozen, hardly enough to impact the election’s outcome.

Board Chair Monica Palmer, a Republican and loyal Trumpite, at one point wanted to certify all the results except Detroit’s. This despite the fact that the city of Livonia, which is over 95 percent white, had more vote/voter discrepancies than Detroit, which is over 80 percent African American and about 10 percent Latinx. There is not even a legal mechanism for the mixed report Palmer proposed.

The entire Board meeting was conducted virtually on Zoom. Board rules mandate that time be allotted for “public comment.” After learning of the Republicans’ attempts to suppress the vote, Congresspeople Rashida Tlaib and Debbie Dingell appealed to their constituents to join the virtual meeting and speak out. Congressperson Tlaib, who represents Detroit, is one of the progressive women of color who comprise the “Squad.”

With almost no advance notice, more than 300 people from Detroit and the surrounding community got on the meeting and made it clear they would not allow this racist voter suppression to go forward. Detroit NAACP President Rev. Wendell Anthony blasted Palmer and her fellow Board member, William Hartmann. In a video that has gone viral, a white Ann Arbor resident compared them to Bull Connor, the segregationist Commissioner of Public Safety of Birmingham, Ala., during the Civil Rights movement.

“You are certainly showing that you are a racist,” State Representative Abraham Aiyash said. “You may say that you are not, you may claim that you are not, but let’s be very clear. Your words today and your actions today made it clear that you are OK with silencing the votes of an 80-percent African-American city.” (Detroit Free Press, Nov. 17)

The multinational virtual mobilization was not only a powerful statement against racism, it was effective. By the end of the day the Board voted unanimously to certify the results.

At this point the matter should have been closed. But after getting a call from Trump himself, Palmer and Hartmann tried to rescind their vote after the deadline for certification had passed. Palmer complained that she was “threatened” on social media. In fact, the worst threats on social media were directed at Representative Aiyash, who is Arab and Muslim.

After losing in Wayne County, Trump summoned a delegation of Michigan Republican state legislators to the White House to get them to illegally appoint his supporters as Michigan’s 16 Electoral College electors. So far they have declined to do so.

On Nov. 23 the state Board of Canvassers, after getting an earful during public comment, voted 3-1 to certify the election results. Over 700 signed up to speak.

But Trump and Giuliani continue to pursue similar strategies in other states to overturn the vote — particularly the Black vote in Atlanta, Milwaukee and Philadelphia.

If the Wayne County canvassers’ meeting had been held in person, community members would have packed the room to overflowing. Yet even with the surging pandemic and cold weather limiting our ability to protest, it is possible to fight the racists and win — and fighting back is the only way to block racist voter suppression.