This article elaborates remarks made by the writer on a Nov. 19 Workers World Party webinar, “Leslie Feinberg: ‘Remember Me as a Revolutionary.’” View the webinar on Facebook @WorkersWorldParty – Political Organization. 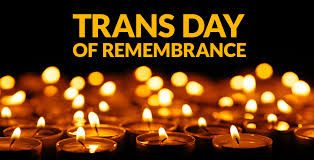 Of these killings, 98 percent were committed against transgender women and trans feminine people, primarily Black trans women and other trans women of color. Transgender sex workers were 62 percent of the people who died.

“Transgender liberation” is a phrase that may seem like a distant dream right now. Oppressed people might very well respond: “We are a million miles away from that!” The odds for survival are still stacked very high against transgender and gender non-conforming people.

But trans liberation also seemed far away almost 30 years ago, in 1992, when Leslie Feinberg released hir groundbreaking pamphlet, “Transgender Liberation: A Movement Whose Time Has Come.” (Free download at tinyurl.com/y5vg2r43.)

One month after Leslie released this work – which liberates the history of trans and gender non-conforming people from behind the lock and key of capitalist oppression – revolutionary Black transgender advocate Marsha P. Johnson was found dead in the Hudson River in New York City. What a hopeless time it must have felt for so many – to have a beacon of revolutionary hope dashed out in such a cruel fate.

Our time of liberation has arrived. It is here.

On this Transgender Day of Remembrance, we must take our time to mourn and grieve those we lost and celebrate their lives – and also celebrate our lives as transgender people still living.

Then we must continue to wage a revolutionary struggle against capitalism – both its imperialism and its continuation of colonialism in the 21st century. This is the exploitative, oppressive system that unleashed transgender oppression around the globe.

In hir 1995 book, “Transgender Warrriors” – the first extended Marxist analysis of transgender oppression – Leslie Feinberg traced the roots of hatred and discrimination against trans people to their origin in the formation of class society.

Feinberg said,“Bigotry against transgender people is a deadly carcinogen,” and ze was, and still is, correct. It is a poison in this world. Transgender people who dare to wage the struggle against this bigotry have the antidote and the cure: revolutionary socialism.

For there to be transgender liberation, there must be socialism.

Devin C is a transgender Marxist and member of Workers World Party. They are the president of Strive (Socialist Trans Initiative), a transgender advocacy organization) in the Gulf Coast West area of Florida/Alabama.