Published in pagina12.com.ar on Nov. 19 following the Nov. 8 inauguration of the Movement toward Socialism (MAS) president Luis Arce and vice president and the Nov. 9 return to Bolivia of former President Evo Morales. Translation by John Catalinotto.

Little by little the daily conversations stop reviewing the months spent under the coup regime and start discussing what happens next. The country is calm, no soldiers remain in the streets, daily life has resumed in La Paz overlooked by the snowy peaks of the Illimani — a word meaning resplendent in the Aymara language – and the cable car that crosses the city reaches El Alto, from where the roads of the altiplano open out. 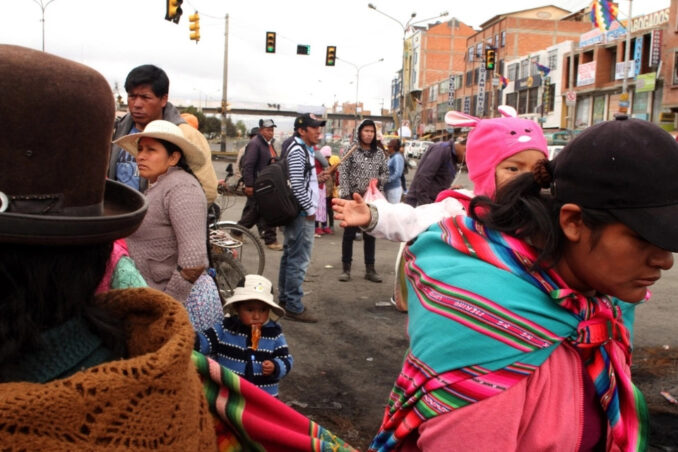 Following the inauguration and Evo Morales return, street life returns to normal in La Paz – or does it?

News still arrives about those who led the de facto [coup] government. Javier Issa, who led the Ministry of Interior, has joined the flight from the country of Arturo Murillo and Fernando López, ex-ministers of Government and Defense. According to the national director of Interpol, Issa flew on Nov. 9 from Bolivia to Miami.

New information has also appeared about the central actors who carried out the November 2019 coup: the National Police. Carlos Romero, a [MAS] government minister at the time of the overthrow, who was later arrested and imprisoned, declared that he had a list of “the police chiefs who organized and led the police mutiny,” particularly in the city of Cochabamba, one of the critical centers during the days of the siege.

According to Romero, 92 weapons disappeared in the Cochabamba riot, which, according to “hypotheses from police circles,” ended up in the hands of snipers who used them to open fire in the town of Sacaba on Nov. 15, the day of the massacre there. The former minister also emphasized that the police “were never friendly to the MAS,” because the MAS had taken away businesses worth millions, and “the police hierarchy” was waiting for “any political condition in which the MAS would stop having this leading role so they could conspire, and the political opportunity arose on Oct. 20 of last year.”

Romero also referred to 300 people, including businessmen and private individuals, who contributed money to the coup, some up to $200,000 each, reaching a sum of “several million dollars.” This last statement was denied by [fascist leader] Luis Fernando Camacho, who claimed to have fully financed the actions himself, in a statement with which he aimed to remain the main leader of the 2019 coup events. He did this as disputes within the rightwing are taking place in the city of Santa Cruz in the East, Camacho’s base.

Reorganization of the rightwing

The Santa Cruz divisions occur within the lodges [secret societies of the wealthy], and in their political organizations, such as the Civic Committee and the Santa Cruz Youth Union. These divisions are part of a process of right-wing reorganization, to determine which sector will take the lead and what strategy will be developed for this new phase.

This reorganization of the right wing indicates something clear: With the defeat of the coup, one stage has ended. One of the questions still unanswered is how to redirect the whole country to the arena of dialogue, coexistence and democracy. This is a complex question at each level − in the police and the armed forces, as well as among the political actors of the right; in business circles, as well as in society; between regions and within the cities.

The coup, as well as the months of de facto government, escalated and exposed the depths of the historical divisions in Bolivia. During that time there was aggression against women in pollera skirts (that is, for being Aymaras, Quechuas [Indigenous nations]) and against people for being or appearing to be with the MAS. These were expressions of colonial contempt. You saw also the phantoms of the middle and upper classes of La Paz, armed inside barricades, expressing their fears of a possible uprising in El Alto [a mostly Indigenous city up the mountain from La Paz] and its descent into the center of the city.

The coup opened up the hatred like a can of worms; it showed that something that seemed largely past had only been contained. How can the abyss be reduced? Is there an irremediably irreconcilable dimension? The process of change, the proposal of a plurinational state, had made progress, but the coup called this progress into question.

On the other hand, in El Alto, for example, the youngest people, who had not experienced coup or right-wing governments before, went through a strong political development. They demanded justice for the massacres that had taken place, like that in the towns of Sacaba and Senkata. This turned into a massive uprising following the whipala banner of the Indigenous, with a renewed sense of political power which, in part, explains the 55.1 percent landslide that handed the MAS the Oct. 18 elections.

The process of change has come out of the coup period strengthened. The offense against the whipala by the police and the de facto government, the persecutions, the militarization of public space, the televised threats and humiliations resulted in reaffirming identities, political views, and leadership roles among the oppressed. Now a stage of internal reorganization begins among the different elements that make up the process, taking up the role of leadership in each movement and organization, of the political instrument − including the parliamentary representation, the executive − that can lead to a correction of errors.

After a year that left a deep mark on the lives of millions of people, the political balance has been reset to that of a year earlier. But what do the majority expect, in particular those who voted for MAS? Economic and political stabilization, deepening of the transformations. The first thing they expect is that the government of the [new President] Luis Arce will impose a permanent tax on large fortunes.

The new stage in Bolivia represents an opportunity for the process of change, which managed to return to political power in a scenario where shots were being fired. For the moment, the country can breathe again. La Paz is that city carved between mountains and summits, at the foot of El Alto with its markets, stores, networks of organizations and Aymara knowledge, amid the immensity of the Andes mountains.