Nov. 14 — If today’s demonstration is any indication, the Bay Area immigrant rights movement holds both Republican and Democratic Parties responsible for inhumane U.S. detention camps and deportations and won’t stop until all camps are closed and ICE (Immigration and Customs Enforcement) is abolished.

Chanting “Joe Biden heed our call, now’s the time to free them all,” several hundred people marched from Union Square through the Tenderloin to the San Francisco Federal Building. 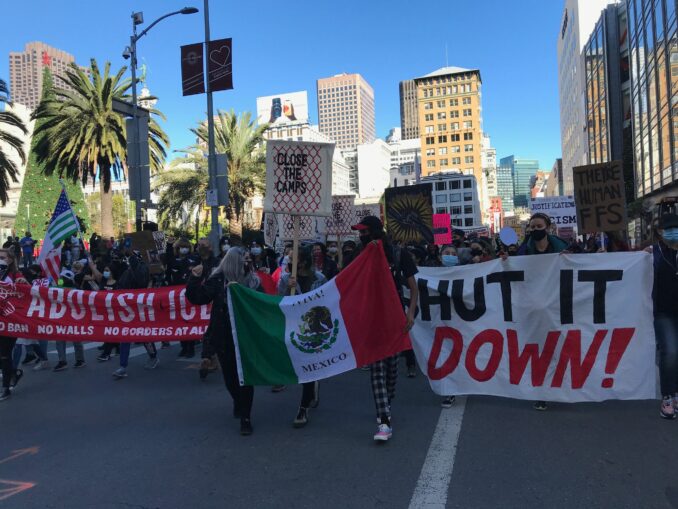 The protest was organized before the elections under the call: “No Matter Who Wins — Close the Camps and Abolish ICE,” and despite the election results the action did not stray from that theme. The protest was organized by the Free Them All Coalition, which includes the Committee to Close the Camps and Free Our Children, DSA chapters San Francisco and East Bay, Party for Socialism and Liberation, No Justice Under Capitalism and Workers World Party.

At the Union Square, speaker after speaker lambasted both the Trump administration and President-elect Biden for anti-im/migrant policies such as the kidnapping of migrant children and their placement in cages as well as the forced sterilizations of migrant women in a Georgia detention center. All agreed that the immigration system was broken before Trump was elected president and that militant action was needed by the entire progressive movement to support im/migrants in the U.S.

Rosa Carranza, a TPS (Temporary Protective Status) holder and activist with the National TPS Coalition, expressed her concern for the hundreds of im/migrant children who have been stolen from their families. She laid the blame for this policy on the Obama administration, which built the cages and on Trump who is using them. “Both administrations are guilty,” she said.

Speakers called out serious human rights abuses in U.S. prisons and jails and demanded that the criminal injustice system “Free Them All.”

The march stopped at a halfway house run by GEO Group, a major private company managing ICE detention centers. Malik Washington, a current resident of the Tenderloin halfway house and the new editor of the SF Bayview newspaper, expressed the solidarity of the prisoners’ rights struggle with the fight for justice for im/migrants.

At the Federal Building, demonstrators sprayed stenciled words on the street and sidewalk demanding an end to the camps, cages and inhumane conditions of im/migrants. The coalition has vowed to continue its efforts to both close the camps and abolish ICE.