Professor Angela Davis, herself once a political prisoner, is a founding member of Critical Resistance, a national organization dedicated to dismantling the prison industrial complex.  On Nov. 16, Davis delivered the following remarks during the virtual press conference “Freedom & Abolition: A critical moment in the fight to free Mumia Abu-Jamal.”

Mumia Abu-Jamal has played such a pivotal role in the processes of popular education that have led us to this critical juncture and what one might call the century-and-a-half-year-old effort to acknowledge the structural and systemic character of racism and to take seriously the demands for abolition. Abolition of the death penalty, of prisons, of the police. And so it is right and just that we should accelerate our efforts, on this new terrain, to finally free our brother-comrade.

Much attention has been focused on Philadelphia recently from the elections, to the police killing of Walter Wallace because he was experiencing a mental health crisis, to the arrest by federal agents of the teacher and community activist Anthony Smith — and we know that barely a week before his arrest, Philadelphia Magazine had applauded Anthony Smith’s community service and his exceptional leadership. And all around the world we have followed the work of Anthony Smith’s organization, the Black Philadelphia Radical Collective, and many of us passionately support the 13 demands they have submitted.

We know also that the City Council in Philadelphia recently offered an apology, an official apology, for the 1985 bombing which killed 11 MOVE members, including five children, and completely destroyed 61 homes.

So I’ve been asked to briefly describe Mumia’s case in the context of the long history of political repression in this country and in the context of the utilization of the criminal legal system to produce pretext for incarcerating people who have chosen to develop radical resistance strategies in relation to racist state violence.

Mumia is a relatively younger member of a generation of Black radical activists and intellectuals who have challenged the structural and systemic character of racism long before this recognition helped to accelerate efforts to reimagine some of our society’s fundamental institutions. Because of our radical stances we were targeted by the state. In many instances the state demonized and railroaded countless numbers of Black radicals, some of us who were freed, but many of whom have been imprisoned for as many as five or six decades.

Mumia was targeted by the Philadelphia police and COINTELPRO, beginning with his membership in the Black Panther Party. His declassified 500-page FBI file shows that the Philadelphia police, in consultation with COINTELPRO, for many years had tried to peg a crime on Mumia. We also know that at least one third of the police involved in his case were jailed after it was discovered that they had systematically tampered with evidence in large numbers of cases across the city of Philadelphia.

I think that few people know that the investigation of the killing of Daniel Faulkner, the policeman whom Mumia is accused of killing, that this investigation was conducted not by the homicide unit of the Philadelphia police department but by its “Civil Defense Unit,” which was the local police arm of [former FBI Director] J. Edgar Hoover’s COINTELPRO. 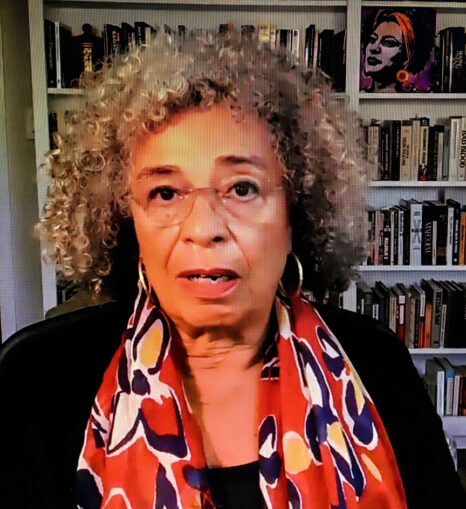 In 1981, Mumia was sentenced to death. And from death row [he] produced brilliant critiques of the prison industrial complex, mass incarceration, capital punishment, and other institutional consequences of racial capitalism. Many of us are aware of the fact that his widely circulated writings have helped to humanize people in prison and people on death row.

Like many others of my age, I’ve been an active supporter of Mumia for many decades. And I’ve had the honor of speaking on his behalf at United Nations conferences and other international venues where Mumia, for example, was declared an honorary citizen of Paris. (The last person before him to receive that distinction was Pablo Picasso [in 1971].) I participated in that ceremony in Paris as his surrogate.

Leonard Peltier, Mutulu Shakur, Russell Maroon Shoatz, Ed Poindexter, Veronza Bowers, Romaine “Chip” Fitzgerald, David Gilbert, and my former co-defendant Ruchell Magee are just a few of the U.S. political prisoners who have spent the vast majority of their lives behind bars and as we know are currently the most vulnerable with respect to COVID-19. We’ve already heard about Russell Maroon Shoatz’s condition. And we’ve heard [Yale professor and global health activist] Gregg Gonsalves emphasize the need for compassionate decarceration, an abolitionist strategy.

Thanks to international organizing efforts, Mumia is perhaps the most well-known political prisoner in the world. And these international efforts saved his life when he came dangerously close to execution in 1995. Mumia’s case exemplifies the length to which the  state will go to silence those who speak truth to power. And this is why the Fraternal Order of Police has been unrelenting in its attempt to silence him and his supporters.

But now that structures of policing have finally been exposed for their systemic racism, and as we call for justice in the names of Breonna Taylor, and George Floyd, and Walter Wallace, and so many others, and now that the city of Philadelphia has issued an official apology to MOVE, now is the time to accelerate our campaign to bring Mumia home. Let’s not forget that Mumia’s identification with MOVE and his empathetic reporting on the city’s repression of MOVE rendered him a major target of the Rizzo administration.

Mumia’s case and the abolition movement

As you’ve heard from Johanna [Fernandez] and others — Linn Washington for example — his case is riddled with violations. Especially the concealing of exculpatory evidence and the presence of Kenneth Freeman at the scene of the killing of Daniel Faulkner although the prosecutor was aware of the fact that Freeman had been identified as the shooter by four witnesses. And [on May 13th, 1985] the same night of the MOVE bombing, Kenneth Freeman was found dead in a parking lot, gagged and handcuffed.

We know that there were clear violations in relation to the selection of the jury. Eleven out of the prosecution’s 14 peremptory challenges were used to eliminate Black jurors. Of course, this in itself, as it’s already been pointed out, supports the call for a new trial. The Supreme Court has ruled that the elimination of jurors on the basis of race is a major violation. And as Johanna and others have pointed out, newly discovered file boxes in the DA’s office, which were there for 37 years or so, contained a list of potential jurors highlighting their race.

And perhaps even more egregious are the instructional tapes that were produced by Assistant District Attorney Jack McMahon, who pointed out that educated Black people should not be selected to serve on the jury. But also, as he said, “Blacks from the low-income area are less likely to convict” and, as a result, “I don’t want these people on your jury.” As he said: “It may appear that you’re being racist or whatnot but again you’re just being realistic. You’re just trying to win the case.”

So finally, the framing of Mumia and his incarceration are part of a larger story of structural racism and repression linked to global capitalism, linked to racial capitalism. Racism drives incarceration and infects policing all over the world, from Rio de Janeiro to Johannesburg, to London, to Paris. Here in the U.S., mass incarceration especially affects Indigenous people and Black and Latinx communities.

And I think we need to emphasize the fact that the very same forces that have driven the creation of the prison industrial complex are responsible for the fact that many people in other countries, in countries of the Global South, have seen their whole economies destroyed by capitalist incursions. They have no other choice than to flee. Thus, the borders and the walls and immigrant detention facilities are integrally linked to racist policing and the prison industrial complex.

I should point out that abolitionist strategies emphasize the connections of all of these institutions. At a time when structural critiques of racism are gaining traction, and specifically its centrality to policing, we gather here to demand the release of Mumia Abu-Jamal and other political prisoners whose trials and sentences were irreparably influenced by their political beliefs and by their challenges to this very system.