[Former President] Evo Morales and [Vice President] Alvaro Garcia Linera stood before a crowd at the Chimoré airport in the heart of the Chapare. The image seemed incredible when, from that same place exactly one year ago on Nov. 11, 2019, they left for exile, first in Mexico and then in Buenos Aires. On that day, Linera took “a handful of land from my homeland.” Now he gave it to Evo, who opened his hand and returned it to its place of origin. 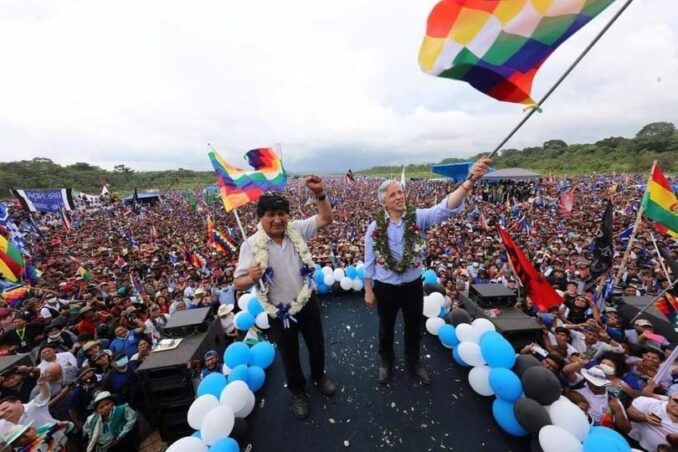 To take off from that runway last year required a three-sided operation between several governments that, as the former president repeated, saved his life. The coup-makers were seeking to capture him. They offered $50,000 to the eight military men in charge of his security to carry out the capture. Not one accepted.

One of the elements that allowed them to fly out on the Mexican government’s plane was the presence of 10,000 people willing to enter the airport with them — this after the coup d’état had already taken place. The town of Chapare [where the airport is located] is Evo’s bastion, the place where he became a leader of the coca growers.

[At Morales’ return] the town became the scene of a massive demonstration. There was no end in sight to the massive assembly. People arrived early with the blue and white flags of the Movement to Socialism (MAS), whipalas [the Indigenous banner], hats and umbrellas for the sun and rain that alternated at the beginning of the tropical plain. Kilometers of the avenue were closed to traffic with food stands, expectation, joy, the need to see Evo, to welcome him.

It was the end of three days of a caravan that Morales rode in, accompanied by Linera, upon his return from Argentina. He entered through Villazón after a speech with [Argentine President] Alberto Fernández in the Quiaca [inside Argentina], and after they walked together to the border line.

The arrival of Evo at Bolivian territory showed what was to come: Thousands were waiting for him with gifts, music, ceremonies, hugs, euphoria, tears.

A similar reception greeted Evo at every stop, as in Atocha where he arrived at ten o’clock on Monday night, and thousands of miners were waiting for him with their lights on in the mountains. Or in the twenty or so villages, sometimes clusters of adobe houses, where he stopped on the way from Uyuni to Oruro. In each one they waited for him at the edge of the road with equal anticipation and celebration, in particular in Orinoca, his place of birth on the immense Andean mountainscape, dry, ocher-colored, as beautiful as it is arduous.

Each stop of the caravan showed the dimension of the leadership of the one who led the process of change for 15 years. His forced departure from the country and his exile reinforced the magnitude of his leadership. Now, from the stage on the runway of the Chimoré airport, wearing a hat and flower necklaces, he spoke to a crowd that welcomed him back to his political home.

The decline of the reactionaries

Evo returned the day after [recently elected MAS candidates for president and vice-president] Luis Arce and David Choquehuanca took office in La Paz. The inauguration was marked by uncertainty until the last hour. A sector of the right wing, under leadership from the city of Santa Cruz and to a lesser extent from Cochabamba, refused to recognize the victory of the MAS, asked for an [election] audit and the suspension of the transfer of command.

The destabilization plan included the deployment of already known methods: accusations of fraud, calls for the police and the army to join in the actions, including the demand for a “military junta,” the beginning of blockades with the deployment of armed groups, “civic strikes,” attempts to advance from the east to the center of the country to reach the center of political power, La Paz. A coup plot similar to last year’s.

First of all, the failure was due to the late implementation of the plot. The victory of the MAS, with 55.1% of the votes on Sunday, Oct. 18, was so large that it nullified possible reactions that had been planned for the same night. The escalation of the attack by a sector of the right began after the recognition of the victory of Arce and Choquehuanca was already indisputable.

Secondly, unlike 2019, there was no national or international bloc to support the last-minute attempt. Inside Bolivia, the right wing split into three: those who began to retreat in order not to be held accountable before the courts, like Arturo Murillo; those who accepted defeat and began to organize as the opposition, primarily Carlos Mesa; and the coup sectors led by Luis Fernando Camacho. Each of the three elements plunged into political irrelevance, an opposition without force, destabilized.

That fragmentation of the reactionaries prevented the plot events from escalating. Requests to coup-installed President Jeanine Añez to suspend the inauguration went unanswered; the Supreme Court of Justice refused the demand for an audit of the vote; and the military ignored the call. A different reaction from any of these three parties would have changed the situation, particularly that of the Armed Forces. Something that, as Evo publicly charged, could have happened a few days before Arce’s assumption of office.

The international recognition of the election victory for MAS was, for its part, complete. Each international mission observing the vote validated the transparency of the election day and validated the count, including the Organization of American States, central to the 2019 coup plot. Even U.S. Secretary of State Mike Pompeo publicly recognized Arce’s victory on two occasions. The marches of the last-minute coup attempt in La Paz were medium, small, even forgotten.

The inauguration of Arce and Choquehuanca, followed by the return of Evo through “the big door” [of Argentina] sealed the defeat of the rightist sectors that were betting on a desperate turn of events. The original plan, which was — as Evo explained at each stop of the caravan — to outlaw the MAS and prevent the return of its leaders, failed. Their final maneuvers also failed.

The complex structure of change

“There is a lot of hope among the people,” Rudy Luis Alberto Yampa told me. He was in Chimoré with his organization, the Regional Coordinator of Parents of El Alto. A few days before I was with him in his neighborhood to learn about the experience of one of the movements that was part of the four stages of resistance to the coup: before the coup succeeded [last year]; the first week of the de facto government until the massacre of [the city of] Senkata — preceded by that of Sacaba; the reorganization of forces; and the protests in August that won the definitive date for the Oct. 18 elections.

Rudy Yampa was shot in the face when, after the Senkata massacre, the people mobilized from El Alto to La Paz with coffins to hold a mass with the bodies present and were repressed. Now, in Chimoré, he told how important the event was, [happening] before so many people mobilized to welcome Evo, even with the economic difficulties, the expectations of the new government, the stage that is now opening in the process of change.

One of the central demands of the Coordinating Committee and various organizations is that there be a renewal in the government, something that happened with the appointment of new ministers. The change not only regards the government, but also the movements. In El Alto, some organizations, like the Unique Federation of Meat Workers, had joined the offensive against Evo. During this past year, Rudy Yampa says, there was a change of leadership that is still in process. “Some of our fellow leaders no longer responded. When we go through difficult times here, we know who we are, whether we are there out of conviction or out of ambition, convenience,” said Evo from Chimoré, referring to the critical hours of the coup.

This is one of the debates of this new stage. The process of change is a complex relationship among campesino [peasant], land-related and Indigenous movements — with their regional particularities — [to form] the Unity Pact that brings together the five main social organizations, the Bolivian Workers Central (COB), the political instrument of the MAS, the governmental and parliamentary expression of the process, and now the new place of Evo and García Linera — forming a relationship between all parts of the alliance.

“Power, as well as the economy, has to be redistributed, it has to circulate,” said David Choquehuanca in his inauguration. The strategic objective is, he said, “to achieve good living conditions and to govern ourselves.”

The legitimacy achieved at the ballot box and the social force expressed in Evo’s return provides the process with an opportunity to make corrections. “We are committed to rectify what was wrong and deepen what was right,” said Arce in the transfer of command. What was good could be seen in the towns the caravan passed through: schools, roads, quinoa processing plants, a leading political role of the formerly excluded nations.

As for what was wrong, the analysis can be divided into two: internal errors in the process of change after 15 years at the head of the government and errors in the face of a coup d’état plot. The coup plot is not a matter of the past: A sector of the right wing has made it clear that it will seek to go into action outside the democratic-electoral framework. This sector has a social base, deep and current historical cleavages, regional leadership, armed groups, financing and international support.

Where there was fire, ashes remain

The sky over Chimoré was filled with planes after the massive event, as some delegations returned to their home bases. Evo had been meeting with Indigenous organizations from various countries in the continent. The Latin American connections have grown in recent months, and Bolivia appears as a point around which a heterogeneous range of progressive forces are gathering.

The story of the process of change combines anti-imperialism, popular participation, community organization, Indigenous recovery, plurinationality, anti-capitalism, economic growth, nationalization, industrialization and Latin American integration. In Bolivia, the people carried out a countercoup in less than a year in the midst of right-wing offensives on the continent.

If what happened last year was a great mirror in which to look at the combination of elements of the coup and its triumph — from the use of social networks to the police/military factor — the more recent events put the strategic successes of the process of transformation on the table.

One is the essential role of popular organization and its accumulation of strength from outside and inside the State. Last year’s forceful expulsion of the MAS government aroused, in the social organizations, a central space of resistance, retreat and initiative at a decisive moment. As for the election of the new presidential team, it took place under fire — and this is another of the lessons learned from a challenge without a unique solution.

Bolivia offers its answers in a Latin American context marked by the difficulty of building alternatives to the current order of things — which is increasingly unequal. Now begins another complex stage, marked by urgent questions: how to obtain the necessary balance between justice and political stability; how to deactivate those involved in the coup, both civilians and within the armed forces and police — the question is how to transform those institutions; how to reactivate the economy now operating at a loss; and how to recompose social coexistence after the year of return of the classist and racist persecutions and the barbed wire barricades in residential areas.

Bolivia has just finished a dismal period. I look out the windows of my hotel room: On one side is the Pan-American Highway with whipalas in the stores, on the other a hill in the wild. The rain gives way to more heat. We lived through a historic victory.