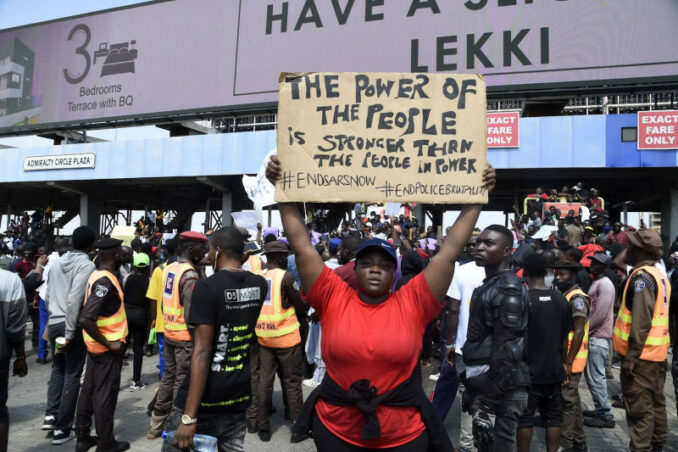 As a Nigerian-American, I was very disappointed in myself for my lack of knowledge about #EndSARS protests in Nigeria that have captivated the world recently. (In Nigeria, SARS stands for the so-called “Special Anti-Robbery Squad” police force unit.)

The dissonance between my words and my action was painfully obvious. I’ve been saying that all Black lives should matter, no matter what part of the world they inhabit, and I was ignoring an important movement from my mother country. Rectifying that, I spent the past week reading up on #EndSARS protests.

As I read, I noticed similarities between violence carried out by SARS in Nigeria and violence doled out by the “men in blue” in the U.S. Both forces rely on profiling in order to identify targets for their attacks. The SARS forces carouse the streets looking for “suspects” based on certain lifestyle traits, such as the car they are driving or the jewelry on their wrists. SARS used this disturbing method on Oct. 3 to rob a yet-to-be-identified young adult of his life in Ughelli, a town in southeastern Nigeria. He was killed for the dangerous crime of driving a Lexus. Two days later, SARS forces shot and killed Daniel Chibuke, a 20-year-old up-and-coming rapper, for daring to sit near a hotel with a friend.

I was reminded of the laws and methods U.S. police use to target Black people, such as “stop and frisk.” Black men and masculine of center people are targeted by police for the most frivolous minutiae, such as wearing a hoodie or driving a car with the radio too loud. Basic things that people of other ethnicities can do without a second thought can endanger the lives of Black masculine people.

In both countries, Black masculine people are harassed, beaten and killed for not buying into classist respectability politics and daring to live as their true selves. The young men’s deaths remind me of a time when I was profiled and patted down by a police officer for having the audacity to go to a grocery store wearing a hoodie on a chilly night. The fear I felt at that moment must have been exactly what those two men – and others – were experiencing as they met their tragic end.

In Nigeria the deaths of the two young men became a call to action for that country’s marginalized, just like Trayvon Martin’s death in 2012 provided the impetus for the Black Lives Matter movement in the U.S.

Learning about the origin of the #EndSARS movement piqued my interest. To find out more about this grassroots organizing, I googled SARS and discovered this hashtag: #QueerNigerianLivesMatter. Seeing those four words pleasantly surprised me as it’s not often that LGBTQ+ people in Nigeria are granted such visibility.

There, as in the States, queer and trans people live under the specter of police violence. Earlier this year, police raided a Lagos Hotel and arrested 57 men on the mere suspicion of being gay. Similar police raids are conducted all over Nigeria on gay men and lesbian women.

Since President Muhammadu Buhari signed the 2014 Same Sex Marriage Prohibition Act into law, police violence against queer and trans people has skyrocketed. It is noteworthy that many current oppressive anti-queer laws stem from the colonial era when the British instituted puritanical,Western-style sexual mores into law against Nigeria’s many ethnic groups.

For Nigerian LGBTQ+ people, the #EndSARS movement could potentially be their Stonewall movement. That uprising in the U.S. in late June 1969 was the culmination of frustration and anger that the most marginalized LGBTQ+ people felt at being on the receiving end of police brutality.

The Stonewall Rebellion sent shockwaves throughout the world and compelled generations to fight for queer liberation. As the current rebellion against police violence is waged in Nigeria, queer and trans activists leading the charge could serve as inspiration to the BLM activists in the U.S., like the Stonewall activists have inspired millions.

In Nigeria, people such as non-binary activist Matthew Blaise and queer liberation organizer Ani Kayode Somtochukwu could be the Marsha P. Johnson and the Storme DeLarverie of the modern day. Queer and trans Nigerians’ fight to have the #EndSARS movement recognize their trials and tribulations mirrors the fight for Black LGBTQ+ people to gain visibility within the mainstream Black Lives Matter movement in the States.

In the U.S., local grassroots organizations have worked hard to recognize Black queer and trans victims of police brutality, but Tony McDade and Layleen Polanco haven’t been able to garner as much notice as George Floyd, Ahmaud Arbery and even Breonna Taylor. McDade, a Black trans man, was gunned down by Tallahassee, Fla.,  police, and Polanco, an Afro-Latinx trans woman, died because of medical negligence by Rikers Island prison staff in New York City. They have been rendered invisible relative to the cisgendered, heterosexual Black victims of police brutality.

The spirited fight of queer #EndSARS protesters in Nigeria could provide the impetus for Black LGBTQ+ activists in the U.S. to increase their fight for representation within the broader Black Lives Matter movement.

As someone with lifelong sympathies with feminism, I feel proud of the role women have played in the #EndSARS movement. While a large focus on police brutality centers on cishet men, women are also victims of sexual violence at the hands of SARS and the Nigerian police in general. One grassroots organization in particular, the Feminist Coalition, is playing a pivotal role in the ongoing protests, providing food, shelter and medical treatment to protesters fighting for an end to police brutality.

Black Lives Matter was founded in the U.S. in 2012 by three Black women, at least one of whom identifies as gender-nonconforming. Black women and femmes have been a major presence at protests against police brutality,

It warms my heart to witness the long tradition of Black women and femmes continuing and driving political movements forward. From Harriet Tubman and Sojourner Truth during the 19th-century abolition movement, to today’s protests spearheaded by Damilola Odufuwa, Odunayo Eweniyi, Patrisse Cullors, Alicia Garza and so many more, Black women have contributed immensely to the fight for Black liberation.

The week I spent educating myself about #EndSARS has taught me that the global fight for Black lives is alive and well. In an era of increasing fascism, Black people – no matter which part of the world they inhabit – need to band together to rebel against oppression – no matter how it manifests itself.

The simultaneous protests in Nigeria and the United States are a positive development in working toward a world where all Black people are truly free.