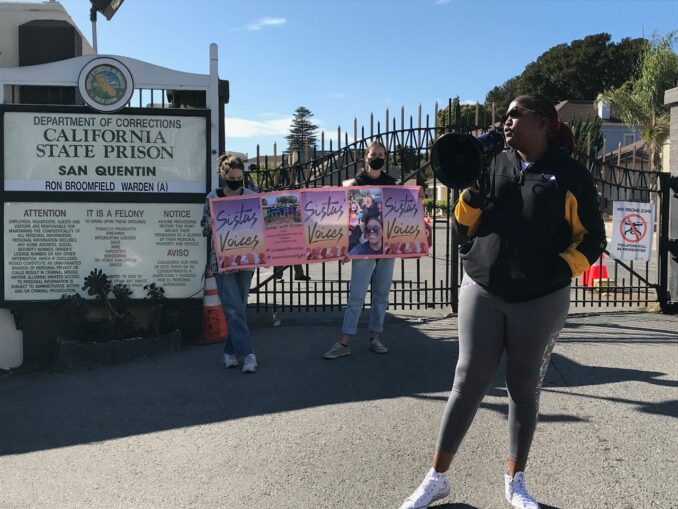 Nov. 8 — Today, prisoner support groups and family members held a spirited demonstration at San Quentin State Prison’s main gate, demanding the state order a mass release of incarcerated people instead of a transfer to other prisons. The protest was organized by Sistas With Voices and family members of people inside.

On Oct. 21, a state appellate court ordered the prison population at San Quentin be cut by half, due to mismanagement at the facility during the COVID-19 pandemic. San Quentin is not only the oldest California state prison, it houses death row for prisoners classified “male” by the California Department of Corrections and “Rehabilitation.” (AP, Oct. 21)

A transfer in May spread COVID from the California Institution for Men in Chino to San Quentin. Since then, over 2,800 of those held in San Quentin have contracted the virus, and 28 have died. The immunocompromised health suffered by most of the aging incarcerated population — coupled with poor ventilation and unsanitary conditions — accelerated COVID transmission.

As families of those inside rallied to demand “Mass Releases, Not Transfers!” a speak-out was held to reinforce this demand. As Elsie Lee of Sistas With Voices chaired, family members who had traveled from all over the state read statements from loved ones — most of whom had caught COVID while incarcerated.

Formerly incarcerated people from San Quentin and other state prisons spoke and emphasized the horror of contracting COVID while inside. Lisa Strawn, a recently released trans woman spoke of getting COVID toward the end of her  25-year sentence: “I actually didn’t think I was going to make it out alive.” Strawn reminded the crowd that San Quentin is not just a “men’s prison”: “There is an entire LGBTQ community inside. I am here to represent that community.”

A phone call by J.B., who is held inside San Quentin, made it clear why CDCR is only interested in transfers, not releases: “CDCR knows that as long as they keep the beds filled and the cells filled, that’s money” coming in for the prison system. He added that the transfers from CIM have spread COVID to other prisons around the state besides San Quentin.

The decision by San Francisco’s First District Court of Appeal called the CDCR’s handling of the virus “the worst epidemiological disaster in California correctional history.” But though the decision mandates the San Quentin prisoner population be reduced by 50%, it does not rule out the use of transfers.

Activism by groups like Sistas with Voices and No Justice Under Capitalism pushed the California courts to order some relief for those held in San Quentin.

But it will take additional pressure from prisoners’ rights organizations, family members, formerly incarcerated people, health care advocates and other allies to win the mass release of 1,500 San Quentin prisoners.

The Sistas organizers say that COVID-19 should not be a death sentence. Mass releases, not transfers — now!