“What I miss from the world is my children, them sitting around the kitchen table, me feeding them my food and them loving it and wanting more. I miss holding my children, smelling their hair.” 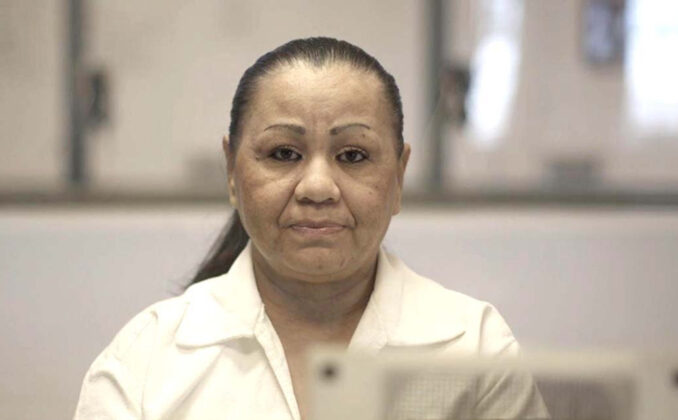 This is Melissa Lucio speaking about herself and her case. The case, that has kept her on Texas’ death row awaiting execution for the last 13 years, is portrayed in a new documentary, “The State of Texas vs. Melissa.”

This film is infuriating! Sad! Horrifying! It keeps me awake at night! But it is well-made, powerful and so enlightening, not only about who Melissa is but why and how she wound up on death row. It should be seen by anyone questioning the need for prisons, the death penalty, the cops, Texas Rangers, or prosecutors.

We learn that Lucio was a poor, undereducated, abused woman living in Harlingen, Texas, on the border with Mexico, when her two-year-old daughter fell down the outside stairs at the family’s second story apartment. The child’s death was a terrible accident, but how the loving mother of 14 children wound up on death row was no accident.

From the notoriously racist Texas Rangers, to the aggressive and demeaning Harlingen police detectives, to the career-climbing court-appointed attorney, to the incompetent medical examiner, to the district attorney who is now in federal prison, to the trial judge – not one single person cared that Melissa was innocent or tried to find out what really happened to her child.

Filmmaker Sabrina Van Tassel is a French-American director and journalist living in France. As an investigative reporter for French TV, she has directed over 40 documentary films since 2004. Speaking on a virtual panel at Texas A & M Law School in October, Van Tassel explained: “I was the first person to interview Melissa, ever. Her daughter died in 2007. No one ever spoke to her—not newspapers, not TV reporters, not anyone.

“Death row — that’s like an atomic bomb hitting the whole family. . . . Her lawyer never spoke to her family. He didn’t allow any of her children to testify because he said they’d run around the court room like wild animals. When her sisters went to the attorney to find out how to get Melissa’s children home with them, he told them, ‘Those kids are animals. Just let them get lost in the system.’”

This is a defense attorney?

Before her trial, Lucio was offered a plea deal of 30 years. She refused the deal because, she told them, she was innocent.

Van Tassel points out, “Once you turn down a plea deal, your chance of losing at trial is 90 percent. The poor, the Black and Brown people ,don’t have a lot of options, and chances of ending up on death row are likely.”

The film, shown at the Tribeca Film Festival this year and released Oct. 20, is now available to rent or buy.

It was a great victory when attorney Richard Ellis got Lucio’s conviction reversed in July 2019, but Texas immediately appealed. No oral hearing has been held by the 5th Circuit Federal Court of Appeals due to the pandemic. Attorneys for both sides answered submitted questions and are waiting on the ruling.

The horrors of the criminal injustice system are so clearly documented in this film that we should all be shouting from our roof tops: “Abolish the death penalty! Free Melissa Lucio!”