A movement has been growing since the Rochester Labor Council’s Oct. 8 resolution supporting a general strike if Trump refuses to leave office. This bold initiative was followed by a similar resolution by the Central Wisconsin Labor Federation. Both groups called on the AFL-CIO to launch the general strike to thwart a right-wing, racist, anti-worker Trump coup.

Now the push is on for workers to withhold their labor in defense of their basic democratic rights. The Western Massachusetts Area Labor Federation passed a resolution Oct. 19 for a general strike and other “nonviolent action,” if “Donald Trump and his GOP enablers attempt to obstruct, subvert, sabotage, overturn or reject a fair and complete count of presidential ballots.” Federation organizer Lydia Wood explained, “We consider that the most powerful tool the movement has.” There are 30 member unions in the federation.

On Oct. 21, the MLK Labor Council, which covers King County around and including Seattle, resolved to “work with allies in the anti-racist, environmental justice, feminist and poor peoples movements as well as the LGBTQ+, religious minorities and immigrant communities to make contingency plans in response to undemocratic actions by President Trump and his allies.”

The council resolved further that “MLK Labor will take actions to prepare for widespread nonviolent action including protests and work-stoppages by coordinating peacekeeper and other necessary trainings.” AFSCME Local 304, representing state workers, had passed a resolution two days earlier urging the Council to take this position.

An October 20 webinar to discuss the general strike strategy featured Association of Flight Attendants-CWA President Sara Nelson, a potential candidate to succeed AFL-CIO President Richard Trumka. Tens of thousands of rank-and-file unionists have signed a “defend democracy” pledge to take to the streets and shut the country down, if necessary to prevent a coup. The Detroit area branch of the American Postal Workers Union appealed to members to sign the pledge. 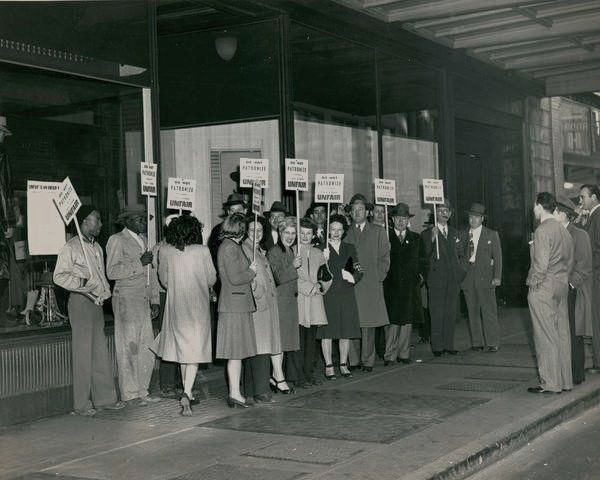 Trumka has not yet taken a position on the general strike calls. But, as Portland Electrical Workers (IBEW) member Doreen McGrath states: “There is a lot of groundswell from rank-and-file workers who are putting pressure on union leadership to pass these resolutions.”

General strikes — collective work stoppages involving a large section of workers in a particular area or a country — are uncommon in the U.S. Besides May Day 2006, the best-known general strikes took place in Seattle in 1919 and in Minneapolis and San Francisco in 1934. Others occurred in Terre Haute, Ind., in 1935, Lansing, Mich., in 1937 and Oakland, Calif., in 1946 — all a long time ago.

More calls for “no business as usual” are sure to come if Trump does not respect the vote of workers and oppressed people. This general strike would be one of the few political strikes — as distinguished from economic strikes — in U.S. labor history. The most recent was the mass strike of immigrant workers on May 1, 2006. In 1947, 250,000 autoworkers walked off the job to protest the anti-union Taft-Hartley Act, which led to union-busting across the country in the decades that followed. Recently, professional athletes struck in solidarity with Black Lives Matter.

A general strike countrywide — or even in scattered locations — over a political crisis would intensify the class struggle in ways unseen in decades.