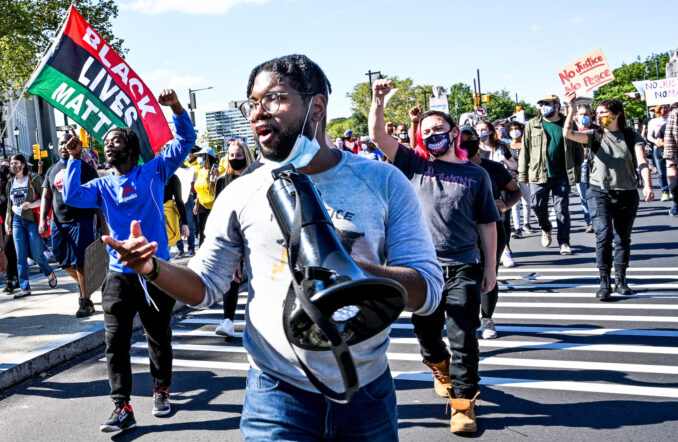 Ant Smith leading chants in Philadelphia at the Oct. 3rd “Fists Up! Fight Back! Rally & Teach In” in honor of Breonna Taylor and in solidarity with Louisville and all communities mobilizing in defense of Black lives.

On Oct. 28, federal officers arrested Smith on trumped-up charges related to resistance activities that occurred earlier this summer during the rebellion after the police murder of George Floyd. These types of bogus charges parallel the racist police tactics that have led to the incarceration of countless Black liberation leaders. They must be urgently resisted.

Smith has been a prominent organizer of the Black Lives Matter movement since 2015, leading countless marches against racist police brutality, to tear down the statue of notoriously racist Mayor Frank Rizzo, and to free political prisoner Mumia Abu-Jamal. Smith’s leadership, whether in serving food every week with Food Not Bombs Solidarity or in the founding of the Philly Black Radical Organizing Collective, has put a target on his back. Now the federal officers and local police want to make Smith a political prisoner.

Like many Black people, Smith has been terrorized by the police throughout his entire adolescence and adulthood. He has been stopped-and-frisked, given rough rides, and brutalized by police during protests. The state recognizes his leadership and his abolitionist politics and is now trying to shut him down, along with the entire Black liberation movement. We cannot let this happen.

The timing of Smith’s arrest couldn’t be more politically motivated. The people of Philadelphia continue to rise up against endless racist police terror, centuries of racist oppression and decades of abuse. On Oct. 26, the Philadelphia police murdered Walter Wallace Jr. in front of his mother and neighbors, who frantically urged police not to shoot. Since then, thousands of people have protested and rebelled against systematic racism and capitalist exploitation, leading to mass arrests and more police riots. The Pennsylvania National Guard arrived on Oct. 28 to enforce a military occupation of the city.

As the capitalist election promises to bring more of a spotlight to Philadelphia and Pennsylvania, we understand that the ruling class and their agents want to send a clear message to the movement: We will shut you down by any means necessary.

Our movements must unite in defense of the most oppressed, in defense of brilliant Black fighters like Ant Smith, by any means necessary.

Workers World Party will do everything we can to support the righteous demands of the self-defense movement:

It is right to rebel against racist police terror!

Drop all charges against those arrested during this rebellion and free all the prisoners!

Reparations to the Black community!

Tear down the prison walls! Free them all!