On Oct. 23, Chatham County became the first county in North Carolina to surpass its November 2016 early voter turnout. This has happened halfway through an early voting period that extends for another eight days — and didn’t include many mail-in ballots sent but not yet received. 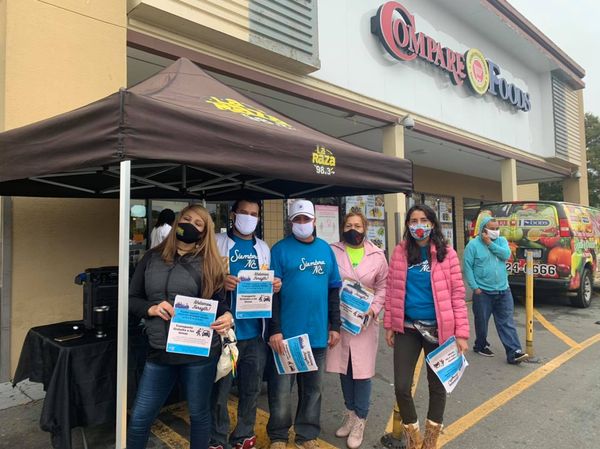 La Raza Triad, a member of Siembra NC, organizes against the pandemic and for voting rights in Silas Creek, near Winston-Salem, N.C., Oct. 25.

North Carolina has been a hotly contested site in this election cycle, not just in the theater of bourgeois politics but also in the very real struggle waged by masses of people fighting for their survival and liberation.

Repressive legal and extralegal bodies of capitalism have been set in motion to suppress and intimidate voters. For instance, during the state primary, an array of white militias gathered outside the main early voting site in Chatham County to menace voters of color.

But across the state, time after time, masses of people have easily overpowered the far right in numbers, in organization and in solidarity.

While the U.S. Supreme Court’s shift to the right has been highlighted in corporate media, in North Carolina it is the lower federal courts – similarly but more secretively packed with followers of the white supremacist in the White House – that have placed voting rights under attack.

In North Carolina, 10,000 mail-in ballots have been made doubtful by a collaboration between federal court judges and the state Republican Party. Constant changes to rules for accepting mail-in ballots, both to make the process less accessible and to invalidate existing ballots, have been the tool for election fraud and voter suppression.

Even the 10,000 ballot number is quite suspicious in North Carolina, as that is the number of votes by which the former Republican governor lost in 2016 – and the cut-off number for calling for a recount. In short, 10,000 is exactly the number of votes Republicans would need to throw out in order to change the election result.

The North Carolina Republican Party seized state power a decade ago through a variety of legal and extralegal machinations. Since then the North Carolina GOP has remained one of the most openly fascistic state-level GOP parties in the U.S.

But this party, with its determination to advance the interests of white supremacy in North Carolina, has been under siege through nominally democratic processes and by action in the streets. For years it has been powerfully challenged by people’s movements like Moral Mondays, the Poor People’s Party, and a current of radical organizing begun in the 1970s by the Communist Workers Party and continued in Black Workers for Justice.

No surprise, then, that some of the GOP-elected lawmakers, seeing masses of people mobilized against them, took matters into their own hands.  In Raleigh, the state capital, a day after early voting began, Gary Pendleton, a former Republican state legislator, was charged with assault against an election worker.

Pendleton was acting as an official Republican poll observer, a role that had previously been illegal under a court decree banning the Republican Party from engaging in direct voter intimidation efforts. The ruling was allowed to expire in 2018.

Workers and im/migrants not intimidated

The attack in Raleigh was not an isolated incident. An hour away in Greensboro, during a voter turnout effort, members of Siembra NC faced down other menacing Republican poll observers.  Siembra NC is an organization of Latinx people defending their rights and building power “with papers and without papers.” Established in 2017, with member leadership teams in Alamance, Durham, Forsyth, Guilford, Orange and Randolph counties, the group is no stranger to resisting intimidation.

In a press release, Siembra NC contextualized the power of their movement compared to the far right: “As voter intimidation goes, this was ‘amateur hour,’ but it’s a good reminder that conservative activists will do anything to keep Latinos from voting.”

So far, the record-breaking turnout is overwhelming the oppressive capacities of the far right.

While winning liberation will require much more than electoral turnout, the importance of ballot access is still essential to the Black and Brown freedom struggles in the U.S. The rising tide of open fascist threat has been powerfully repudiated by the working class and the oppressed in North Carolina, and throughout the U.S.

Months into street demonstrations, amidst growing pushes by organized labor toward a general strike – and as the contradictions of capitalism grow ever more stark – mass mobilization around the issue of voting rights is a sign of rising class consciousness in the U.S. – and of the potential for a historic repudiation of capitalism and imperialism.