Hundreds of people gathered near Wazobia African Market on the southwest side of Houston on Oct. 14 to protest police brutality in Nigeria. They came together  to draw attention to the Special Anti-Robbery Squad, known in Nigeria for its extrajudicial killings, torture, extortion, frame-ups and blackmail. “End SARS” protests exploded on a global scale after viral videos of police brutality caught the attention of people of the African diaspora and those allied against global colonial structures of power. 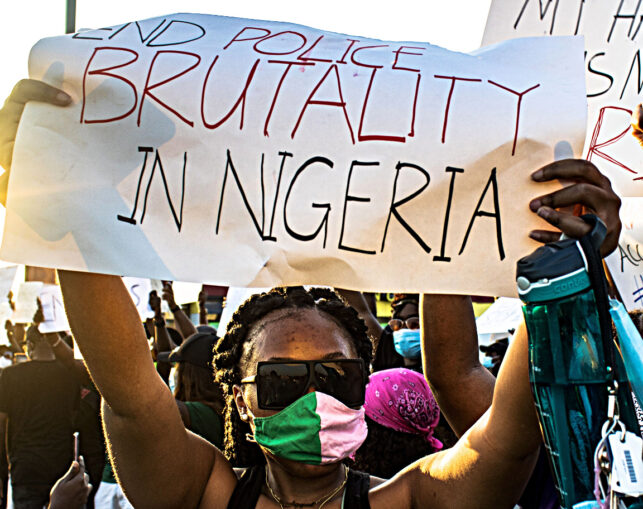 At least 1,900 Nigerians have been killed by security forces in that country this year. In the last five years in the U.S., nearly 1,000 people have been reported to be extrajudicially executed by police annually since the 2014 Ferguson uprisings.

On Oct. 11, in the wake of international protests, the Nigerian government called for the disbanding of SARS and for its officers to be relocated to other sections of the police force. (Guardian, Oct. 16)

But a new Special Weapons and Tactics team was proposed to replace the SARS formation. SWAT teams were an invention of the Los Angeles Police Department and linked to attempts to quell internationally minded liberation movements in the U.S. and abroad. (Stuart Schrader, “Badges Without Borders,” 2019)

“Anger with law enforcement is nothing new in Nigeria. The country’s police force evolved from colonial era institutions and still perceives its role as protecting the interests of the ruling regime rather than citizens themselves,” says Lanre Ikuteyijo, a researcher at Obafemi Awolowo University in southwestern Nigeria. (New Statesman, Oct. 16)

Despite the Nigerian government’s concession to disband SARS, protests rage on because the masses will not be fooled by empty promises. The October ruling to end the terror group marks the fifth time since 2015 that the Nigerian government has promised reform of SARS. (Guardian, Oct. 13) “Reforming” violent colonial paramilitaries that protect extraction empires only results in new policing structures and continued violence.

Both the Black Lives Matter movement originating in the U.S. and the End SARS movement originating in Nigeria are international mass movements against police brutality, which affirm Black life around the world. The #BLM and #EndSARS movements are decentralized, somewhat spontaneous outpourings, very notably youth driven. As a result of these international movements, colonial monuments have come down on nearly every continent.

People have targeted police precincts in Minneapolis and the SARS headquarters in Abuja, Nigeria and are rising in cities across the globe for an end to police brutality. (Washington Post, Oct. 11) This global movement against the oppressive material reality maintained by centuries of white supremacist rule cannot be stopped by empty promises or mass death.

Facing tactics of law enforcement that know no borders — repression from tear gas, kidnapping into unmarked vehicles and brutalization of protesters and journalists — the people are moving forward toward collective liberation.

Nigerian novelist  Chibundu Onuzo said of the protests, “When one of us hurts, we all hurt. When one of us wins, we all win. This was the Pan-African dream of Marcus Garvey, of W.E.B. Du Bois . . . of Kwame Nkrumah and of many others.” (Guardian, Oct. 16)