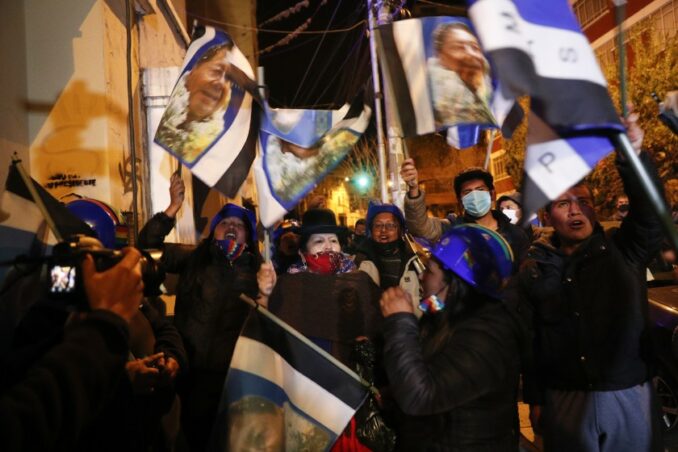 Supporters of the Movement Toward Socialism (MAS) in the streets Oct. 18 to celebrate the landslide victory of their candidate.

Millions of people cheer with delight the landslide victory of the Movement toward Socialism (MAS) in the Bolivian elections. We join them.

The rightists who came together for last November’s coup are split, squabbling over the spoils of corruption. Their ten-month rule destroyed Bolivia, leaving its population defenseless before the pandemic.

That Bolivia’s Indigenous people and workers have resisted the pro-imperialist coup regime and its massacres — and have handed the MAS this electoral triumph — is a slap in the face to the imperialists, local fascists and oligarchy.

A slap in the face. Not a shot to the heart.

While we heartily join the Bolivian people’s celebration, we have to keep in mind the dangers that still exist. The safeguard to victory for the oppressed classes is the possession of their own instruments of power.

U.S. imperialists — whether the hated Trump or the Biden variety — have both targeted Bolivia’s people and its former president, still in exile, Evo Morales. A measure of MAS’ success will be Morales’ ability to return to Bolivia. The imperialists and the local oligarchy fear his ability to mobilize the masses of people — as only he can at this moment.

The rightist Carlos Mesa, who finished second, speaks softly. Last October and November, Mesa showed he too was dangerous. Fascist Luis Camacho, who finished a distant third, still has a base of power in the eastern city of Santa Cruz and still has backers among the police and fascist gangs.

The national military, who betrayed Morales last year, remains tied by many strings to the wealthy and especially to U.S. imperialism.

The elections have shown that the vast majority supports the MAS and that they are ready to defend it. We in the imperialist center must give all possible support to whatever steps they take to assure that defense succeeds.