Larry Holmes is the First Secretary of Workers World Party

The Rochester Labor Council passed a very forward-thinking resolution on Oct. 8, calling on the AFL-CIO to call a general strike if President Donald Trump refuses to leave office. Soon after, the Central Wisconsin Area Labor Federation passed a similar resolution.

The Southern Workers Assembly called for “No business as usual at work, school, wherever you are!” if Trump attempts a coup. And the Unite All Workers for Democracy caucus inside the United Auto Workers endorsed the Rochester resolution.

Many other labor bodies are now taking this up. Labor unionists everywhere are talking about the need for a general strike if Trump tries to hold on to power.

This is a huge development. 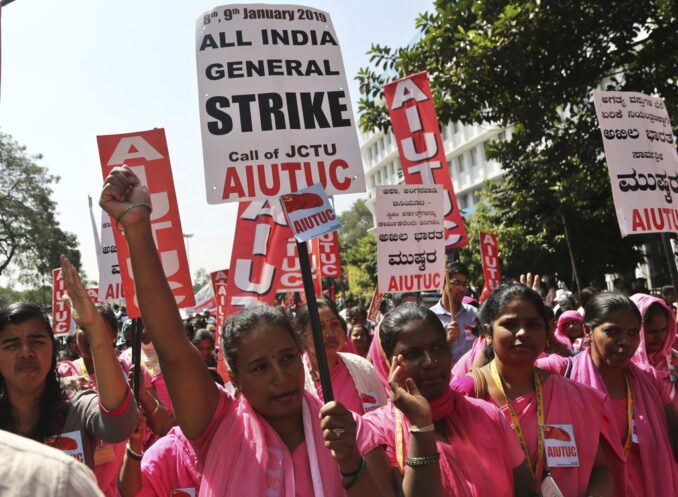 All-India General Strike, Jan. 8. This is what a general strike looks like!

A general strike against a Trump coup?

In an article published by Workers World Newspaper called “The Left, the election crisis and the ‘elephant in the room,’” I speculated that very few socialists, if any, were considering what the working class would do, apart from voting, in response to the threat of violent fascistic attacks, and an attempted coup next month by Trump and his loyalists. (workers.org, Sept. 25)

That article said that most of the left did not expect the working class, as a class, to intervene in the election crisis in any way that differs from — and suggests some independence from — the ruling class political establishment, because the top labor movement leaders only do what Democratic Party leaders tell them to do.

We have been pleasantly surprised.

What this talk of a general strike will lead to is uncertain. The general strike talk is not about demanding protection for workers against COVID-19 or aid for the millions of unemployed workers or a permanent moratorium on evictions and foreclosures. It is essentially about defending the candidates of the Democratic Party, a capitalist tool whose function is to keep the workers and oppressed hostage to the capitalist system.

But even with this contradiction, the talk of a general strike — two words that are feared by the ruling class, and rarely if ever taken seriously by unionists — is something new and something big. 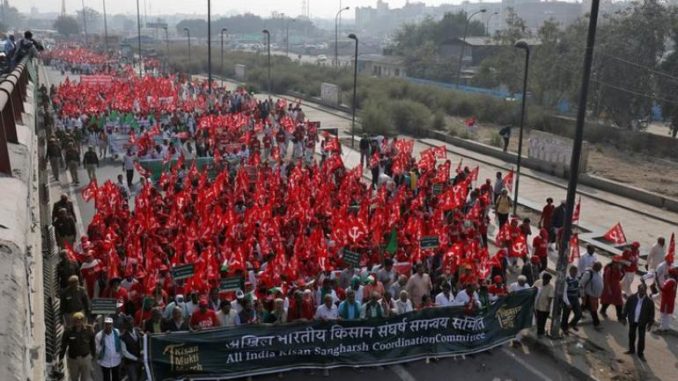 All-India General Strike, Jan. 8. This is what a general strike looks like!

The working class intervenes in the political crisis

A few weeks ago, the call by a significant number of unions and labor unionists for work actions against racism represented the beginning of a new phase that held the potential of forging a new relationship between the anti-racist rebellion and organized sectors of the working class.

It now appears that the new talk in the organized labor movement about the need for a general strike if Trump tries to stay in power has taken center stage. In my view, this development is about more than the issue of the general strike, which is, of course, central.

This development is a sign that the present political crisis is so unique, so serious, that it is compelling the organized labor movement to consider acting somewhat independently of ruling class politics — and acting as a class that has social power which transcends the day-to-day struggle over working conditions or merely urging union members to vote.

Neither the Republicans nor the Democrats nor the capitalists they represent want a revival of the general strike. To them, it would signify a harbinger of a turn in the organized labor movement toward a measure of independence from the capitalist political parties.

If this movement for a general strike isn’t quashed soon, it will reanimate other issues vital to the working class, such as the need for a 180-degree turn towards the mass organization of workers — especially those workers who have been so terribly neglected by the top leadership of the organized labor movement.

It could open the door to a more militant upsurge in the class struggle. Maybe it could even lead to a much needed reconsideration of organized labor’s pitiful relationship to the migrant workers’ struggle. The call for work stoppages against racism may be on the back burner for a while, but that will only be temporary. Events will reawaken it.

And, it will be clear that the movement for a general strike against a coup attempt by Trump — and strikes against racism — are being driven by the same things that are pushing the working class to act in its own defense.

The article on “The Left, the election crisis and ‘the elephant in the room’” imagined the prospect of a fusion between the militants in the street who have  carried out an “intifada” against police terror since the spring, on the one hand,  and the best forces within the labor movement, on the other hand. Such a fusion will not be based on something one-dimensional, like a meeting between these two forces, although such a meeting would be an excellent idea.

The fusion will derive from, and be tested by, the next uprising. But most importantly, the resolve of a critical force of militants to do whatever is needed to see that such a fusion becomes a reality will be decisive.