The sitting president of the United States has once again vowed to flout the results of the 2020 election. Donald Trump has called on his supporters — including police and sheriffs — to go to the polls on election day. He implies their role is to prevent people from voting — people he expects will vote against him. He implies if he loses the vote, he’ll defy the will of the people from a position of control of the government and in de facto command of various white supremacist militias around the U.S. 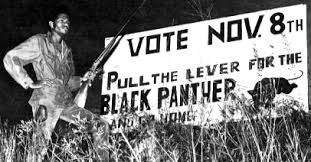 In Alabama in the mid-1960s, the Lowndes County Freedom Organization defended the right to vote for the Black community–the origin of the Black Panther Party.

Trump’s words indicate that an increasingly desperate and violent faction of the ruling class is preparing to call into question even the theater of elections. As ever, voter suppression and violence will be felt first and foremost by nationally and/or gender-oppressed members of the working class, especially in the South.

Trump’s threats have already aroused resistance. Locally in the South, workers’ organizations have started fighting back. Antiwar military veteran groups called for poll watchers to facilitate voting for the voters whom Trump’s people want to suppress. More Than a Vote, a collective of athletes headlined by LeBron James, is fighting to combat voter suppression by increasing the number of poll workers in Black electoral districts. And one group has asked the United Nations to supply poll watchers.

On April 17, Trump took to Twitter to call for his supporters to “Liberate Michigan.” Two weeks later, police stood back as armed reactionary groups entered the Capitol to threaten Gov. Gretchen Whitmer for taking measures against the pandemic — and for daring to be a woman running Michigan.

On Oct. 8, federal law officers announced they had disrupted a plan by militia groups to kidnap Whitmer. No one on the left would look to the FBI to defend democracy, so its involvement in this case illustrates the heightening contradictions within the U.S. political system and the dangers ahead.

This recent attack against the Michigan governor mirrors earlier actions in June 2019 in Oregon. At that time, armed militias shut down the statehouse to prevent a legislative session from taking place. The militias specifically targeted another of the few women elected as governors in the U.S., Gov. Kate Brown, an openly bisexual woman.

The combination of male chauvinism and racism, which leads white gunmen hellbent on besieging the government to overturn nominally democratic processes, is itself an immediate threat. Should Trump be voted out, yet try to remain in office on Nov. 3, this threat will escalate further.

Even the corporate-owned news media expressed vague alarm at Trump’s reaction to clear demands he condemn white supremacist militias such as the Proud Boys. During his first presidential debate with Biden, Trump instead told these fascists to “Stand by” — an order more akin to his tweet to “Liberate Michigan,” which is connected to the assault on Michigan’s Capitol. Trump’s public statements are a likely signal of what to be ready for on election day and immediately thereafter.

This is the first major election cycle after the courts gutted an renewed attempt at voter protection. And what happened? A sitting president called for the exact same attempts at voter intimidation deployed decades earlier.

The working class fights back!

The International Association Against Torture (IAAT-AICT) and the December 12th Movement have called on the United Nations to provide international election observers from the African Union or CARICOM (Caribbean Community), the major organizations of Black U.N. member states, to observe the U.S. elections next month.

A letter signed by D12M leaders points out Trump’s threats and the dangers of having groups like the Proud Boys at the polling places, in terms of denying ballot access to Black people in the U.S.

And as the working class thinks globally, it may also act locally. Voter intimidation has always been the sharpest in the South, and in North Carolina, Black Workers for Justice has echoed the demands of the IAAT-AICT and D12M, but also called for local action. Their statement reads in part:

“Social movement and civic organizations are organizing ‘Safe Vote’/ activities that include culture, grassroots surveillance and security. These measures need to be widespread and highly organized whether in urban areas or polls in rural communities. In the remaining days leading up to the election, our communities need to be assured that if they haven’t voted by mail, that when they show up at the polls, someone will have their backs. This work is an important way for activists to connect with their neighbors, co-workers and allies.

“Another important tool that has been suggested by Mississippi activists is to call on local police chiefs and sheriffs, now, to publicly state what they intend to do if the Proud Boys or other similar forces show up. Put them on the record about whose side they are on.”

The strongest defense for the working class and the oppressed is solidarity — internationalist, proletarian, and as ever, in the streets, factories and shops.

Regardless of what happens in November our only way forward is to stay mobilized! Keep it in the streets!