When Kentucky Attorney General Daniel Cameron announced Sept. 23 that a grand jury was not charging a single police officer in the cop murder of Breonna Taylor on March 13 in Louisville, Ky., mass demonstrations erupted there, in New York City and in many other cities. On Sept. 25, Taylor’s family demanded the grand jury “open the books” and reveal the evidence used to reach its decision.

New evidence has now been released. Recordings from the grand jury proceedings and body cam footage from some police officers at the scene have raised many doubts about the legitimacy of the investigation and the handling of the crime scene by the Louisville Metro Police Department (LMPD). 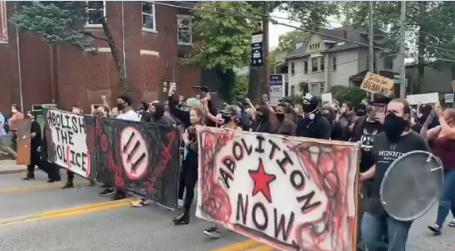 A protest against the police killing of Breonna Taylor, held Sept. 24 in Louisville, Ky.

AG Cameron’s case for the LMPD officers hinges on their claim they announced themselves before breaking into the apartment where Taylor lay sleeping beside her partner, Kenneth Walker. The AG’s key witness testified to confirm this.

But Vice News obtained audio recordings of the original interview with this witness, who can be heard plainly saying, “No, nobody identified themselves.” Only after this initial interview did the witness change their story. AG Cameron presented no information from the first interview, but only testimony from the later interview that confirmed the cop narrative. (tinyurl.com/y24l86dz)

This is a huge indication of bias in the case presented to the grand jury, since this was the only witness claiming to hear the police identify themselves. None of the dozens of other neighbors interviewed by Vice said they heard the police announce themselves.

But recently released photos from the scene show Officer Tony James wearing a body cam, which he did not turn on, in a violation of department rules. The cam footage would have provided crucial evidence of the shooting. Without that, the case comes down to the word of the cops against that of Kenneth Walker, who fired a gun at unknown men breaking in like thieves. (tinyurl.com/yxt5nwj4)

Many hours of video footage are now available which show officers after the shooting, the scene during investigation and the arrest of Walker. One body cam recording shows one officer who fired a weapon, Brett Hankinson, walking back into the crime scene and being asked to leave by investigators. Hankinson lingers and asks questions. Another involved officer, Mike Campbell, is seen walking around, interviewing neighbors. (tinyurl.com/y5b7u865)

This later body cam footage clearly shows both these cops in violation of standard departmental practice after a cop shooting. Involved officers are supposed to be separated and assigned a “peer support officer,” in order to ensure they don’t speak to others on the scene or tamper with the investigation.

More than fifteen hours of tapes of released grand jury proceedings show other police distortions and inconsistencies. For instance, Officer Hankinson claimed that from outside he saw someone with a long gun inside the apartment. But no long gun was recovered, and the window he said he looked through was covered by blinds. (tinyurl.com/y55segjh)

This new evidence strongly confirms public suspicion and anger about Taylor’s death and the state’s protection of police misconduct.

In July, Taylor’s family accused the LMPD of a cover-up, after it came to light that investigators interviewing Officer Mattingly asked leading questions to coach him into a story that would clear him of wrongdoing. This behavior indicates that from the get-go, the investigators had every intention of sweeping the murder of Taylor out of sight. (tinyurl.com/y4jc6cjw)

The state’s investigation has utterly failed to pursue justice for the killing of Breonna Taylor. Unrelenting protesters continue to push for the only real justice that can be had — the defunding and abolition of the police.