During this election season, the struggle for “Defend the Vote” protection is especially sharp in the South, where ballot access has historically been a powerful organizing tool in the Black freedom struggle, including the passage of the Voting Rights Act of 1965. 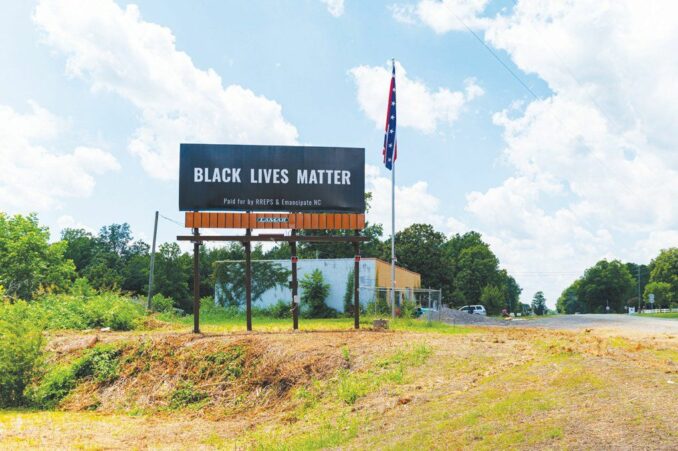 A 24-foot ‘Black Lives Matter’ billboard was installed in July in Chatham County, N.C., paid for by a local GoFundMe campaign, to protest the flying of a Confederate flag.

In 2013 in North Carolina — one of the states still under limited federal oversight by the VRA — the state legislature had a number of voting-related laws which were slated to be struck down as unconstitutionally racist under the VRA. Then the Shelby v. Holder decision by the U.S. Supreme Court gutted the VRA and opened up years of vicious attacks on access to the vote by poor and oppressed people.

The struggle to access the vote has showed up dramatically and locally at polling sites such as those in Chatham County in rural North Carolina during the 2020 primary. There, members of various white-supremacist militias staged a “flagging” demonstration, flying equal numbers of Trump, Confederate, U.S. and white-supremacist militia flags at the Chatham County Agriculture and Conference Center on Feb. 15. They arrived to intimidate during the first Saturday of early primary voting — and at the same time as major efforts from local Black community organizers to turn out the vote.

The militias present included the League of South — a national group that gained infamy for numerous violent felonies at the Unite the Right fascist demonstration in Charlottesville, Va., in 2017 — and a number of local groups, such as the Sons of Confederate Veterans, a white-supremacist militia. These groups took over the parking lot and demonstrated at the only entrances to the polling site, even inside the legally mandated buffer zone. Within that zone, supposedly no electioneering is allowed, and voter harassment is barred. The militias demonstrated there with impunity, under the direct protection of the Chatham County Sheriff’s department.

For the general election this November, local anti-racist formation Chatham Stands Up and Democracy N.C., the statewide organization sponsoring the Election Protector program, were able to respond to the neofascist threat and win minor changes to election law that offered slightly better protection for voters across the state.

One approach by Democracy N.C. relies on an all-volunteer group of vote protectors to find and report voter intimidation and suppression efforts to civil rights attorneys. These are then able to gain new polling sites and improved hours and investigate irregularities in reported vote totals.

With President Trump’s recent message to the Proud Boys militia to “stand by” for intimidation during the coming election, the need has accelerated for strong local “Defend the Vote” actions to stop these racist, fascist groups.