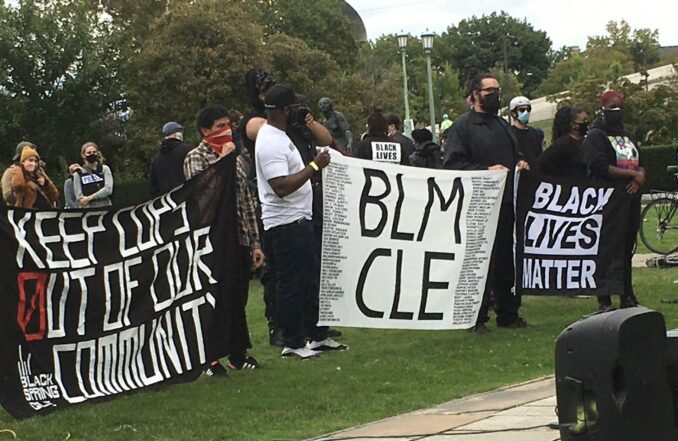 While presidential candidates Joe Biden and Donald Trump were debating in what many have labeled a “shitshow,” thousands of Greater Clevelanders came out for a “Protest for Black Lives and Climate Justice.” A broad coalition spread the word about the action on social media. Sponsors included Black Lives Matter Cleveland, Black Spring Cleveland, Coalition to Stop the Inhumanity at the Cuyahoga County Jail, Inter-Religious Task Force on Central America and Colombia, and Cleveland Sunrise Movement

Latonya Goldsby, cousin of 12-year-old Tamir Rice, came in a shirt that said “Cleveland police murder Black people.” Goldsby, president of Black Lives Matter Cleveland, spoke at the rally about the many families in Cleveland impacted by police killings. “Not one of the officers in those murders has been charged or convicted,” she said. “Yet, we see these candidates come in and out of our cities pleading for the Black vote, making promises that they never intend to keep.”

Rice was killed in 2014 while playing with a BB gun outside a city recreation center. No charges were brought against the two cops involved in his killing. After the rally, marchers chanted his name repeatedly along with the slogan “He was 12 years old, how you justify that?” Other signs and chants drew attention to Breonna Taylor, George Floyd, Sandra Bland, Tanisha Anderson (killed by Cleveland police nine days before Tamir Rice), and all the victims of racist police violence. 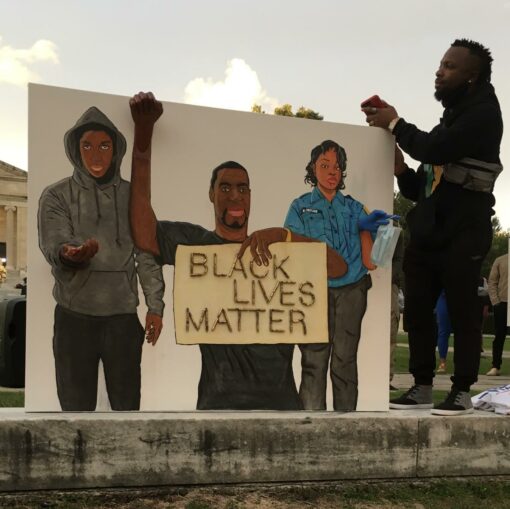 The organizers were forced to move their protest to a site a distance away from Cleveland Clinic, where the debate took place. The city administration created a militarized zone around the Clinic’s Samson Pavilion, intimidating potential protesters with help from heavily armed federal troops and Ohio National Guard with tanks, suburban police, Secret Service, the FBI, surveillance cameras and undercover cops in unmarked vans. This repressive atmosphere was made possible despite initial complaints from city officials, who were not consulted before the debate was announced.

To create an additional obstacle for demonstrators, City Hall banned street parking around the protest site and paid parking garages nearby were closed to the public. Wade Lagoon, where the rally was held, was in the “debate zone” where a list of items, including canned goods, coolers, water bottles, wood and plastic sticks and sound amplification, were banned. After organizers moved the protest from a site close to the debate, the city expanded the zone to include the area around the lagoon. 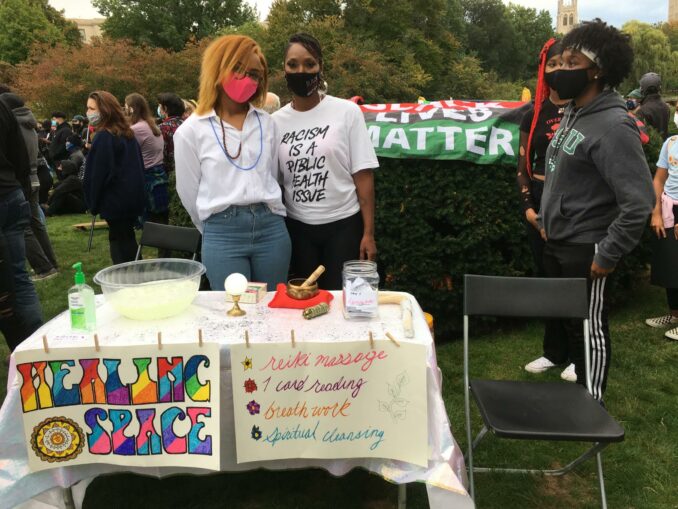 The coalition outmaneuvered the state, however, escorting groups of people from parking areas and mass transit stops to and from the site. A support system included medics, marshals, food, and healing space.

The diverse groups that came together for the Sept. 29 action hope to build on that success and create a united front to fight for justice — regardless of the outcome on Nov. 3.