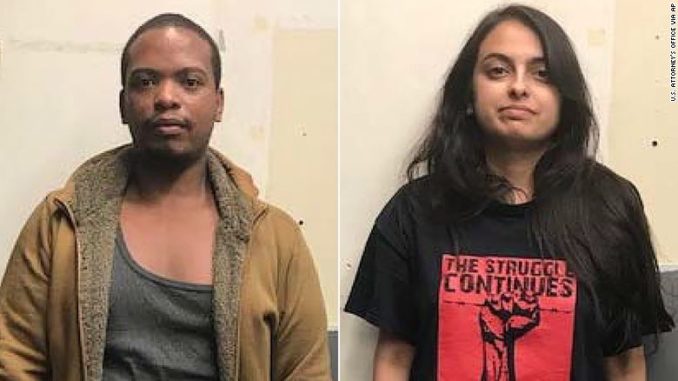 A surveillance camera outside this city’s 88th Precinct in New York captured footage on May 30 of a Molotov cocktail setting an abandoned, badly damaged, and heavily spray-painted police car on fire. That same night, police kidnapped and caged Urooj Rahman and Colinford Mattis, charging them with taking part in the incident.

The charges that punishment bureaucrats attached to Mattis and Rahman for their purported role in setting an abandoned cop car on fire carry an incredible mandatory minimum sentence of 45 years to a maximum of life in prison.  (Buzzfeed, Sept. 16)

At the bail hearing for Rahman and Mattis, these bureaucrats relentlessly tried to keep them confined to cages until their trial. However, after being held captive for weeks, both were released and placed under house arrest.

Along with the state, some South Asian community members have also engaged in acts of violence against these political prisoners by guilting and shaming them for their alleged involvement in harming state property.

On a South Asian-centered online forum, one person wrote that because Mattis and Rahman are “educated people but they committed a serious crime. . . it’s important that the court makes an example out of them and gives them a long sentence.” This person added that they “don’t have much sympathy for people who seek to wreak havoc.” Another wrote that “the most surprising part [about this story] is that they’re both lawyers and children of immigrants. They should’ve 100% known better.”

This illustrates the major dilemma for some South Asian communities when discussing profound acts of protest: We continue to rely on our proximity to power for security, rather than engaging in deep solidarity with those whose actions mold our path towards liberation.

Instead of vilifying Mattis and Rahman, it is crucial that we actively assess how their actions have challenged respectability politics, loosened the racial wedge separating South Asian and Black communities, and contributed to building class consciousness.

Mattis is of Jamaican descent, while Rahman and her family migrated from Pakistan to the United States. Both were raised in im/migrant communities, attended law school, and practiced as attorneys prior to the May 30th incident. Since the arrests of Rahman and Mattis, news outlets have paid exceptionally close attention to their occupation, publishing headlines with phrases like “two promising lawyers” (CNN, June 18), “Molotov-tossing attorney” (weekly Blitz, Aug. 21), and “bomb-throwing lawyers” (New York Post, June 23).

In the United States, lawyers are often the gatekeepers protecting the ruling class’s authority, which, in turn, puts them in a position of power. Moreover, news outlets carefully choose words that reflect a principle central to migrant communities: “Do not bite the hand that feeds you.” Mattis and Rahman’s alleged act against this principle demonstrates that the worth of an oppressed community member is solely based on their commitment to serve the oppressor.

The value attached to a person from a minority community is also reflected in how communities of color are pitted against one another. South Asians are considered “model minorities,” hard-working, intellectual, and law-abiding people. In turn, those who are not model minorities are stereotyped to posses opposite attributes.

This toxic dichotomy has perpetuated anti-Black racism in South Asian communities and created barriers for communities of color. The courts demonstrated, however, that one’s “model minority” status does not ensure protection against state harm, thus weakening these divisions and strengthening our need to build class consciousness.

The current uprising has sparked an international call to end white supremacist violence against all communities of color. For those of South Asian descent, how do we intend to answer?