Incarcerated im/migrants are suffering new punishments at the Buffalo Detention Center in Batavia, N.Y., where they are being detained by Immigration and Customs Enforcement (ICE) of the Department of Homeland Security. In early April, BDC made national headlines with one of the highest rates of COVID-19 infection of any prison in the country. The center operated without social distancing, masks or new cleaning procedures until mid-April. 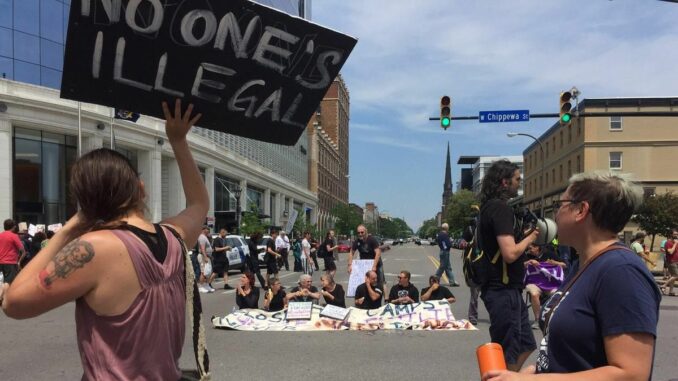 There have been years of protest throughout central and upstate New York against the local detention and incarceration of im/migrants. Here, people are arrested at a ‘Close the Camps’ protest in Buffalo, N.Y., in July 2019.

A lawsuit filed in March against BDC and the state of New York has progressed. A federal judge has ordered the center and state courts to reverse the burden of proof for determining holding of arrestees and to offer bond more frequently and at lower costs. (tinyurl.com/y4t525z9)

A similar federal court order was made in a lawsuit against the state of Massachusetts earlier this year, which is still pending.

Persons named specifically in the New York lawsuit include immigration judges Philip Montante and Mary Baumgarten. Both have denied bond to more than 95% of all arrestees who have appeared before them. The Batavia immigration court, which processes people from all over New York state, ranks third nationally for bond refusal, offering bond to only 20.9% of arrestees. The national median is 35%. Bond, if even offered, is more expensive in Batavia, with a median of $14,000 as opposed to the national median of $9,000.

A second development is a new lawsuit filed by Dalila Yeend and Bounam Phimasone, both former detainees at the Buffalo Detention Center. They are joined by the Worker Justice Center of New York (WJCNY). The suit confronts Akima Global Services, the owners of BDC, over labor violations and low pay. (tinyurl.com/yyt27lyb)

Most detainees — 90% of them — are civilly detained, meaning there is no conviction against most of them. One of the plaintiffs of the suit, Yeend, was detained for not having a driver’s license on her person. She has legal residency in the U.S., but when she was detained, she was held for 2 1/2 months.

The Buffalo Detention Center pays all working detainees $1 a day, regardless of hours worked, which can be as long as 12 hours. BDC does not offer hazard pay, and many of the workers are responsible for wards of people infected with COVID-19. (thebatavian.com, Sept. 4)

The main focus of this lawsuit is not the unreasonable conditions of Yeend’s initial arrest and time spent in detention, however, but BDC violations of labor law. WJCNY Legal Director Rob McCreanor states, “This is a private company that is contracting with the federal government and is making a lot of money off that contract. That is in part due to the free labor that they are getting from immigrants in civil detentions [who] aren’t prisoners serving terms for crimes — they are immigrants who are detained waiting a resolution for a civil immigration matter. It’s a gross violation of their rights.” (wjcny.org, Sept. 4)

Work at BDC is coerced in a parallel to forced slave labor. Detainees who do not work are frequently placed in solitary confinement, or partial solitary, meaning less than 23 hours alone. And they are placed in solitary without reading material or any other means to occupy themselves.

Work is doubly coercive because BDC allocates detainees the bare minimum of needed items including hygiene products and vitamins, while their needs are more pressing during the pandemic. Detainees are restricted to an expensive private commissary to meet their basic needs. A small shampoo at the commissary is $5. Food from the vending machines can be $5-$10. Deodorant is $10.

Phone calls start at $3 and increase per minute. The phone is of critical importance, because detainees need to be able to communicate with lawyers for court cases and with their families if they are offered release. If they cannot communicate due to lack of funds, their cases or release may be seriously delayed.

Detainees who are released from BDC are taken to a Citgo station at the New York State Thruway exit for Batavia. This is technically a bus stop for Greyhound Bus Lines, but released detainees are not usually given any cash to buy tickets. While detainees are legally owed the means to transport themselves home, for someone to admit they do not have means for transport often results in a longer stay.

Detainees are typically dropped off late in the morning, after the two morning buses have passed, so they have to wait almost all day for the next bus. But people waiting for the bus are not permitted to wait inside the gas station, and there is no bus shelter. This becomes a very dangerous situation during inclement weather, especially in the brutally cold upstate New York winters.

Local activist groups including Justice for Migrant Families and local churches try to meet detainees at the bus stop. They offer backpacks with basic supplies and sanitary products, as well as rides to where released people need to go. But the groups do not have the resources to maintain a constant presence at the bus stop.

When the Investigative Post, a Buffalo based nonprofit, wrote an April exposé on the practice of abandoning former detainees, ICE denied everything in the article — but did not provide any evidence to refute the dire facts.