When Philadelphia city officials banned all large parades due to COVID-19, AFL-CIO officials cancelled their annual Labor Day parade, opting for a virtual event and telling workers to “stay home and watch it on TV.” Rank-and-file workers, however, made other plans. As a result, Labor Day 2020 will go down as one of Philadelphia’s most politically significant and progressive celebrations of Labor Day in recent memory. 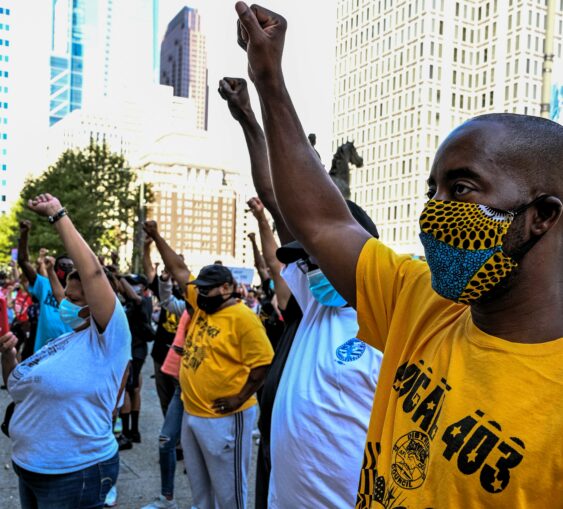 Outside City Hall, the militant Solidarity Rally with Frontline Workers brought out nearly 200 workers from a broad range of public service jobs. Key demands included personal protective equipment (PPE) for all workers, hazard pay and no cuts or layoffs. Participants were urged to call Philadelphia Mayor Jim Kenney and other city officials to lift up these workers’ demands and to sign their petition. (tinyurl.com/yy9t8nwa)

One speaker from Teamsters Local 623, representing UPS workers, challenged the bosses’ use of the word “essential” to describe the jobs he and other workers do, day-in-and-day-out, facing the risk of COVID-19. “For seven months, we have been called ‘essential,’ but how can we feel essential when we don’t get PPE, we don’t get hazard pay and when the bosses threaten us with layoffs? We need to organize and take back our worth!”

While there was no traditional blocks-long Labor Day march, the diversity and militancy of the speakers more than made up the difference. In addition to the traditional wearing of T-shirts identifying union affiliations, many wore Black Lives Matter shirts or face masks.

Noticeably absent were the plethora of politicians who often use the Labor Day parades to promote their individual campaigns.

One dominant theme was the importance of rank-and-file workers in pushing their unions to take a more active role in promoting workers’ demands. Three organized rank-and-file union caucuses present included WE (Working Educators of the Philadelphia Federation of Teachers), RAFT (Rank-and-File Temple Caucus) and the newly formed group UNITY, a progressive caucus organized within AFSCME locals.

The rally ended with a moment of silence for all the essential workers who have lost lives to COVID-19, followed by a rousing promise that the struggle for the rights of frontline workers will continue. When we fight, we win!