A student-led organization called the Harvard Prison Divestment Campaign is fighting to dismantle the prison-industrial complex, starting with their own school’s administration. Research has exposed that portions of Harvard University’s $39 billion endowment are invested in the notorious prison profiteers GEO Group and Core Civic.

The website of the campaign, which was formed in 2018, says, “Our demands are simple. The Harvard Management Company must divest all of Harvard’s holdings in companies that profit from the prison-industrial complex and reinvest in communities disproportionately affected by mass incarceration.” Additionally, the campaign demands the university publicly disclose all its endowment holdings for transparency and accountability, re-invest in communities and people affected by the prison-industrial complex, and launch initiatives on decarceration and ways to end structural reliance on prisons and police. 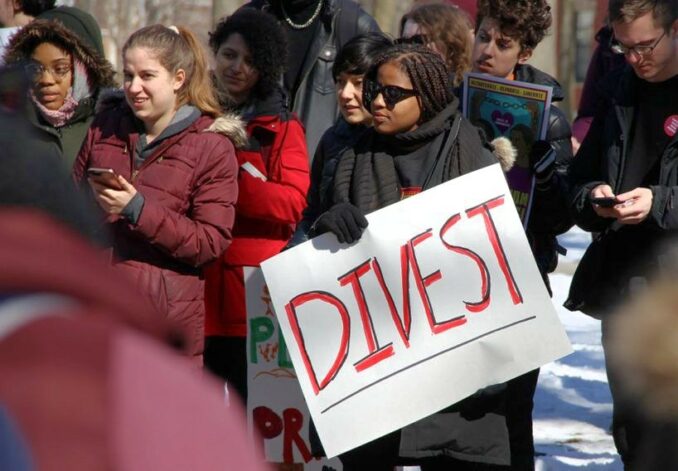 Amanda Chen, an HPDC organizer, arrived at Harvard Law school as a committed prison abolitionist. “I was so disillusioned by the very narrow and traditional curriculum at Harvard Law School,” she told Workers World in a recent interview.

“A friend invited me to a meeting of the Harvard Prison Divestment Campaign, and immediately I knew I was surrounded by amazing, hardworking, dedicated prison abolitionists, who shared the same vision of the world that I want. A vision of the world that does not include fixing all of our problems using weapons, tasers, guns, violence and cages. A world where all of our problems are addressed at their root with love, compassion, care, community services and, ultimately, a non-violent philosophy.”

Originally unsure about the efficacy of protests, she found the demonstrations she attended against the prison apparatus to be inspiring — and effective.

“People always ask me, ‘Do you really think you can get Harvard University, the university with the largest endowment in the world, to divest from prisons just because you ask them to?’ And to them I say, ‘No one ever thought that a group of activists could get Harvard to divest from South African apartheid. That took 10 years. And you know what? Nine and a half years in, I bet some people were thinking, ‘Wow, this hasn’t been going well for a really long time. Maybe we should give up.’ But they didn’t. And they won!”

Chen also cited the recent successful push to get Jamie Dimon, CEO of JPMorgan Chase to divest his holdings in private prison facilities.

“We are at a turning point in history,” Chen said, in reference to the world-historic uprisings against the police after the murder of George Floyd.