Letetra Widham declared, “I don’t want your pity. I want change!” The sister of Jacob Blake gave an impassioned talk at an Aug. 25 press conference in Kenosha, Wis., the city where police shot her brother two days earlier. This horrific act set off protests there demanding “Justice for Jacob Blake!” 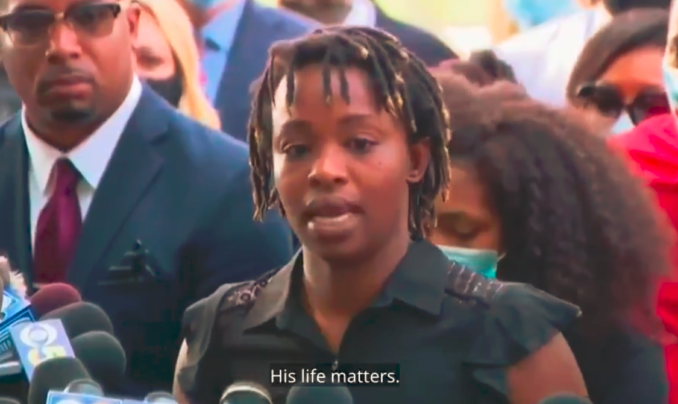 Blake, a 29-year-old African American, lies paralyzed in a hospital bed after being shot in the back seven times by a white police officer. Three of his six children watched this brutal attack. Outrageously, Blake was shackled to the bed until a public outcry stopped that cruel act.

Widham’s eloquent speech, which went viral, touched millions of people who are angered by endless racist police violence, including those who have taken to the streets to demand an end to this terror against the Black community and to systemic racism, while calling for justice for its victims.

“So many people have reached out to me, telling me they’re sorry this happened to my family. Don’t be sorry, because this has been happening to my family for a long time, longer than I can account for. It happened to Emmett Till. Emmett Till is my family,” she said, referring to the 14-year-old African American murdered by Klansmen in 1955 in Mississippi. “It happened to Philando, Mike Brown and Sandra,” naming three of the many African Americans killed by police bullets or while in police custody — Philando Castile, Michael Brown and Sandra Bland.

“This is not new,” said Widham. “I’m not sad. I’m not sorry. I’m angry. And I’m tired. I stopped crying years ago. I am numb. I have been watching police murder people that look like me for years. I’m also a Black history minor, so not only have I been watching this the 30 years I’ve been on this planet, but I’ve ‘been watching this’ for years before we were even alive.”

Jacob Blake Sr., told reporters, “They shot my son seven times like he didn’t matter. But my son matters. He’s a human being, and he matters.”

On Aug. 28, the 57th anniversary of the 1963 March on Washington for Jobs and Freedom, thousands rallied at the Lincoln Memorial in Washington, D.C. The day’s theme refers to the police killing by choke hold of George Floyd in Minneapolis, which sparked the countrywide Black Lives Matter-led multinational movement of millions of people.

Key to the day’s program was the inclusion of family members of Black and Latinx victims of racist police or vigilante violence. Speakers stressed the need to struggle together and vowed to keep up the fight for “the justice we deserve.”