Aug. 30 — Lance Corporal Ahmed Al-Babati, an active duty British soldier since 2017 and member of the 14th Signal Regiment, was arrested Aug. 24 in London while protesting the British government’s support for Saudi Arabia and its criminal war against Yemen. 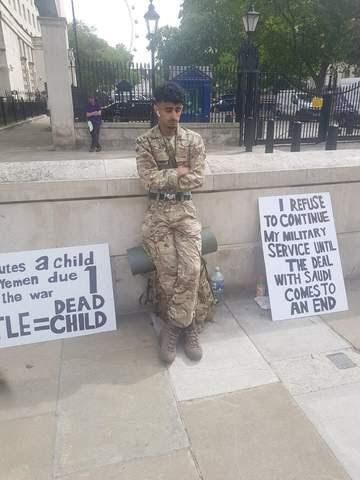 The arrest took place outside the official residence of the British Prime Minister at 10 Downing Street. Al-Babati was taken into custody by both the Royal Military Police and London Metropolitan Police. (see video: streamable.com/3fe6si)

In a video posted online, Lance Corporal Al-Babati explained the reasons he took action: “It is clear that this government has blood on their hands; so with that being said, I refuse to continue my military service until the arms trade with Saudi Arabia has been put to an end. It is reported that a child dies every ten minutes in Yemen; so I’ll be standing outside 10 Downing Street blowing a whistle every ten minutes, so they can hear every time a child dies, due to a war they continue to arm and support.” (streamable.com/gknjh8)

Veterans For Peace U.K. issued a strong statement in support and solidarity with Lance Corporal Al-Babati which concludes, “As fellow serving and former soldiers, we have the power to provide direct support for Al-Babati and to explain and publicize the atrocities that he has exposed.” (tinyurl.com/y38d7x89)

British and U.S. arms manufacturers BAE Systems, Lockheed Martin and Raytheon Technologies, to name a few, have had billions of dollars in sales to Saudi Arabia since the war began in 2015.