For 50 years, the San Francisco school bus drivers union has led the fight for safe — and unionized — transportation of children to and from school. Now the school district and its bus contractor First Student are threatening to lay off 260 drivers and strip them of their healthcare and other benefits.

“The fight is on,” said Sharon Chappill, president of their union, SMART Local 1741. “We won’t let them tear up our union contract and put our children in harm’s way,” she told a powerful demonstration at San Francisco City Hall on Aug. 20, which included a strong showing of over three-quarters of the entire membership of the school bus drivers’ local. (tinyurl.com/y56r6r9w) 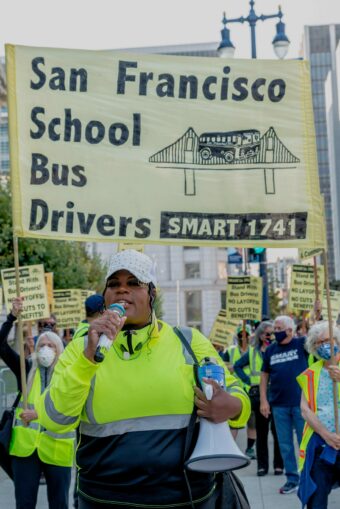 SF School bus drivers march to the school board to demand healthcare for all! Credit: Santos Nieto.

Also speaking were Susan Solomon, president of United Educators of San Francisco, the teachers’ local, and Alida Fisher, parent of a child with disabilities. Fisher spoke with feeling about the caring and sensitivity of the school bus drivers toward the children who were in their charge. The unionized drivers are required to conform to stringent requirements for licensing of drivers and for special outfitting of the buses to ensure that the children’s safety is protected.

The SF Unified School District has awarded a partial contract to a nonunion ride-share company called Zum to take over the transportation of some children to and from their schools. The drivers and their union are saying: “No way!”