Aug. 22 — The UNC System of state colleges and universities is the largest employer in the only state in the South where Walmart isn’t. It operates six designated minority-serving institutions (MSIs) — five Historically Black Colleges and Universities (HBCUs) and UNC Pembroke, which serves the Indigenous Lumbee people. 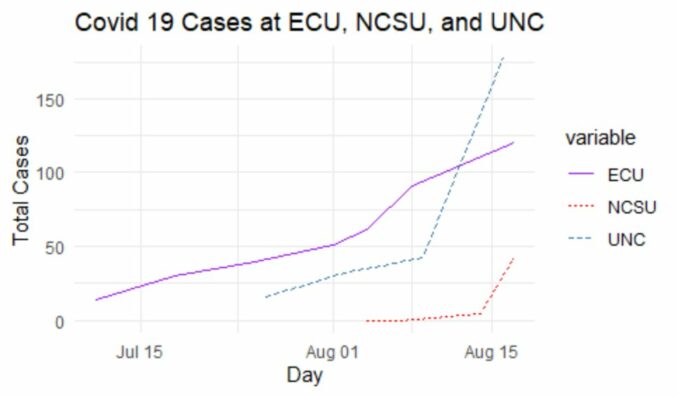 The UNC System directly employs around 45,000 staff and many more contractors, teaching 240,000 students. Its total economic impact is many times greater. Workers in the system are organized by the radical UE150 North Carolina Public Service Workers, and the system schools have strong traditions of organizing, frequently grounded in the Civil Rights Movement of the 1960s.

Despite guidance from the health department not to do so, and despite worker and student resistance, on Aug. 10 three of the largest schools in the system opened for in-person instruction. These schools — UNC at Chapel Hill, North Carolina State in Raleigh and Eastern Carolina University (ECU) in Greenville — each have about 30,000 students.

In-person gatherings are inadvisable in any event during the pandemic. Here the near-total failure to address the risks of COVID-19 beyond “hygiene theatre” and empty words set campuses up for failure from day one.

By the end of the first work week, each of these three campuses had counted more than 100 positive cases for students. This overwhelmed UNC and NCSU’s quarantine capacity, which they had claimed would last a semester. Multiple clusters were reported daily.

UNC and NCSU shut down in-person instruction effective Aug. 21. The #ShutDownECU campaign by students and the #SafeJobsSaveLives campaign by UE150 are collaborating to shut down ECU as well before it is too late.

When N.C. Central University opens for in-person instruction Aug. 24, all schools in the system will have opened for in-person instruction except UNC Charlotte.  Fayetteville State (an HBCU) and UNC Pembroke opened Aug. 5, and thus far have not experienced outbreak conditions, although they all have active cases. These campuses have smaller enrollments, some 6,000 to 8,000 students.

These failures must be by the design of administrators. Reopening plans from the beginning denied campus workers hazard pay and adequate personal protective equipment, made no provision for sufficient testing for workers and students, and were based on unclear and inconsistent guidance on in-person versus remote instruction. In the UNC System, education, if considered at all, is as distant an afterthought as safety in the efforts by wealthy white political appointees to reopen campuses.

At UNC classes were suspended only after national media attention was brought to the University, after administrators tried but failed to suppress news reports of clusters forming on campus, which indicated a total failure of their supposed program for control of COVID-19.

But even as their failures made national news, the UNC System doubled down. System President Peter Hans stated on Aug. 17: “The decision to adapt operations applies to UNC-Chapel Hill only, because no other UNC System institution has reported information, at this time, that would lead to similar modifications.” (northcarolina.edu, Aug. 21 press release)

Reporting is the critical factor there — within 24 hours, student reporters at NCSU confirmed the existence of previously unreported clusters on their campus. Students organized a sick-out, and the campus moved to shut down at the week’s end. Three days after his previous statement, Hans lied again: “[Reopening] is being undermined by a very small number of students behaving irresponsibly off campus, which unfairly punishes the vast majority of their classmates who are following the rules.”

His dishonesty was insufficient to hide a COVID-19 explosion. The public finally learned that in Chapel Hill, 25 UNC students had to go to ER for COVID symptoms on Aug. 14. That was before the first clusters on campus had been reported.

Different conditions at UNC, and to a lesser degree NCSU, may have made outbreaks both more obvious and quicker to emerge. These outbreaks, however, confirm the assessments of workers, students and public health efforts that reopening is unsafe.

As the UNC System attempts to maintain in-person instruction in the face of the impossibility of doing so, consequences will grow. In wealthy, mostly white regions like Chapel Hill, even an overburdened ER may be equipped to respond.

Other UNC system schools, especially HBCUs and UNC Pembroke, respectively serve primarily Black and Indigenous students in their communities. City-based schools, such UNC Greensboro and UNC Charlotte are valuable resources for their cities and their state but lack the colocated UNC Health facilities, which sit within large population centers and include a medical school.

Large public universities like Appalachian State and ECU dominate their comparatively small metropolitan areas. An outbreak there, which in-person opening threatens, could quickly overwhelm local resources. And a short glance at racial disparities in health outcomes reveals exactly that oppressed communities of color will be primarily affected.

While it will take some time to gain a clear view of the conditions on other campuses, workers and students are continuing to organize to fight for themselves and their communities. And the closure of two major universities is just a glimpse of the struggle to come.