With the U.S. death toll from COVID-19 expected to surpass 200,000 by the end of August, governing bodies in U.S. cities and states are taking matters into their own hands. They are calling for U.S.-Cuba scientific and medical collaboration against the pandemic.

On July 21, the San Francisco Board of Supervisors unanimously passed a resolution for the U.S. to cooperate with Cuba against COVID-19, saying this could “save lives.”  (48hills.com, July 22) 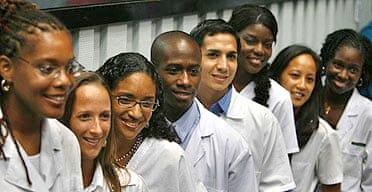 In 2007 the first medical students from the U.S. to graduate from the Latin American School of Medicine in Havana, Cuba, vow to return home to use their skills to treat poor people, in keeping with the school’s socialist principles.

Resolution sponsor Supervisor Hillary Ronen pointed out that Cuba’s pharmaceutical industry has developed drugs that should be available in the U.S.: “Limiting cooperation with Cuba makes no sense.” Similar resolutions have passed or been submitted in several California cities and in Massachusetts and Minnesota state legislatures.

On Aug. 7, Minnesota state senators and representatives sent a letter to Gov. Tim Walz, along with a senate resolution and house bill advocating reaching out to Cuba. The letter noted that “[A]s the place where George Floyd was killed, we have an obligation to our people of color and Indigenous communities to demonstrate our commitment to address the vast disparity in the impact of the pandemic on their populations. Our proposal may present one of the best opportunities to do so by recognizing and learning from a country whose medical brigades and outreach have brought assistance to the world’s poorest and most disadvantaged people.” (Cubadebate.cu, Aug. 12)

Pappas, who has taken three delegations to Cuba, acknowledged that nation’s long history of providing medical assistance to other countries during epidemics like Ebola, swine flu and dengue.

As of May, over 50 countries have requested and received assistance from Cuba to combat the virus, and over 80 countries have requested Cuban pharmaceutical products, including interferon, proven to successfully mitigate the impact of the coronavirus. Cuba has sent more than 2,000 doctors and nurses to 23 countries in Europe, Latin America, Africa and the Middle East since the pandemic began. (The Nation, May 22)

The Trump administration has refused to lift the U.S. blockade of  Cuba and allow interferon or other Cuban-made drugs to be sold or tested in the U.S. In 2005, Cuba offered to send 1,600 medics, field hospitals and 83 tons of medical supplies to New Orleans after Hurricane Katrina decimated the city. U.S. President George W. Bush rejected the aid. After Hurricane Maria in 2017, President Trump rejected Cuba’s offer to send doctors and humanitarian aid to Puerto Rico.

In April, Josefina Vidal, Cuba’s Ambassador to Canada, stated: “[I]f the current United States government asks for assistance to confront COVID-19, Cuba would provide it. Cuba advocates that solidarity, the need to put aside political and ideological differences between countries and cooperation among all, is the only way to overcome this pandemic.” (The Progressive, April 30)