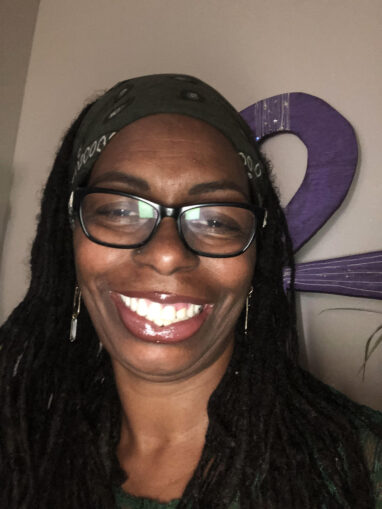 This edited talk was given at an Aug. 13 Workers World Party webinar, “From Black August to Black Lives Matter,” hosted by the WWP Prisoners Solidarity Committee.

I am so honored to be here, in the company of people of like minds. I feel rejuvenated and encouraged to be a part of this.

Never Forget, Never Again, Never Alone is an organization I founded in 2000 as a result of a conversation with my husband. He was in Pelican Bay, arriving in 1989. He was released from SHU [Security Housing Unit] there in 2015. [Inmates in Pelican Bay SHU spend 22.5 hours daily in windowless cells — it is a notorious supermax prison in the U.S.]

It’s been such a challenging transition for him. It’s like peeling back an onion, because they’ve been so traumatized. He slept on the floor, [suffering] from sleep deprivation and traumatic events that I can’t even name.

We just rallied to get the word out for Black August. We commemorate Black August. We don’t celebrate it, because Black August acknowledges our fallen comrades — brothers and sisters who gave their lives — comrade George [Jackson], Khatari Gaulden, Sister Adama [Traoré].

Black August: a time to commemorate and educate

Cell Blocks 2 City Blocks is an organization started by a brother who passed away last year. He got out about three years ago. He reached back to support the brothers, and [he] reached out to college Black Student Unions and young people to get them involved and open up their eyes to what was going on behind prison walls.

Cell Blocks 2 City Blocks was in the community and contributing to the community by creating jobs, creating organizations, helping them to access resources that they otherwise would not have known.

[Another organization is] KAGE Universal, started by Minister King X. He combines music, art, bringing out and highlighting the work of so many talented brothers and sisters behind those enemy walls; doing concerts,  getting art shows and helping them get resources so their voices can be heard.

The KAGE Universal [work] involves the youth, because we understand that the whole prison-industrial complex has a pipeline created to bring our babies in there. It happens in the elementary schools, when they start saying “You have a disciplinary problem; you have a learning issue.” They are making a way to bring foster children into this pipeline.

We know that the community loves them, misses them, wants them home. We are trying to get the word out to the community. We all see them and know that everybody deserves a second chance.

The Black August Organizing Committee [which I’m on] is working to bring awareness of Black August every day. Black August is a time to commemorate, but we also educate. We’re trying to heal in the midst of all this going on. We want to heal. We are loving, caring men and women. And we want to continue to elevate and raise awareness to that.

This particular year, when my husband is on the mainline [general prison population], is mind blowing. Not only has he been incarcerated all this time, but he’s locked up more now than he was. When he was in SHU and trying to just navigate that and keep his spirits and encouragement [up was one thing] — now we find ourselves in this pandemic.

Inmates not able to social distance

In California, we started having these conversations in March about if it gets inside the prisons, that’s going to be a petri dish. It’s going to spread. Now it is widespread. Gov. [Gavin] Newsom and Secretary of the California Department of Corrections Ralph Diaz said that they would not be transferring [people]; they would practice social distancing. They did not hold true to the statement that they gave.

They’ve transferred prisoners from Chino to San Quentin. Now they have 25 deaths, including eight staff. There is an outbreak in Folsom, [after] one of the guards there went to San Quentin to help, when their pandemic became overwhelming. Now they’ve taken that back to Folsom.

They have [prisoners] in tents in Folsom. They had eight people [positive] on Friday [Aug. 7]. I spoke to a brother today — now they have 100 people [positive] out there. They don’t even have a physician on staff. They have porta-potties that don’t flush. At what point is any of this considered inhumane?

What do we have to do to bring awareness and stop this? Incarcerated people’s lives matter, and we can no longer accept this. We are trying to organize nationwide, because this is happening throughout Texas, Florida, New York. It’s happening everywhere where there’s no regard.

The inmates are not able to social distance. They don’t have enough of the hand sanitizers and things to be able to comply with what the Centers for Disease Control and Prevention has said helps decrease the spread. Their masks [are from] old jumpsuits that they’ve made. But staff walk around and don’t comply.

[There was] the raid at Soledad. Not only [guards] pulled them out of their beds at 3 a.m., they didn’t allow them to get dressed. [Guards] didn’t allow [prisoners] to get their masks and they made racial slurs, like they hope all those “n—-rs” got the COVID-19 virus. Well, guess what? Now there are 12 positive cases.

Numbers are continuing to climb [at Soledad], because they’re not even treating them. When people are complaining about how they’re not feeling well, the nurses — who they are having language barriers with, so they can’t really communicate — tell them that they’ll be okay. They’re young; it’s all in their minds.

At what point is enough, enough? Their lives matter. From a capitalistic perspective, we are taxpayers, and we have to make the states of California, of Texas, of New York, all of them, take notice and acknowledge us and know that our lives matter — that they are our husbands, brothers.

From the MOVE people, I’m so excited that finally, after all these years, and after all of the tragedy and losses, they’ve all been released. This meeting is so inspiring to me to know that there are people out here who do know we are no longer going to stand for this. We are going to put our foot down. We have to inconvenience them. We have to let them know that this is no longer acceptable.

We have to continue to fight to raise awareness to get the word out, to be informed and network. I’m so excited and proud and thankful to have been included in this conversation. We are just going to continue to bring the awareness, network and be prayerful.

Makini Iyapo has a long history of involvement in the prisoners’ rights movement in California. At the webinar she represented Never Forget, Never Again, Never Alone; California Prison Focus/KAGE Universal; From Cell Blocks 2 City Blocks; and the Black August Organizing Committee. She is the spouse of a prisoner who has been incarcerated for 45 years.