If 150 million people vote by mail in November, it would not overwhelm the United States Postal Service, which daily processes over 472 million pieces of mail. But postal officials, in apparent coordination with President Donald Trump’s efforts to suppress voting rights, have enacted actions which delay mail delivery. 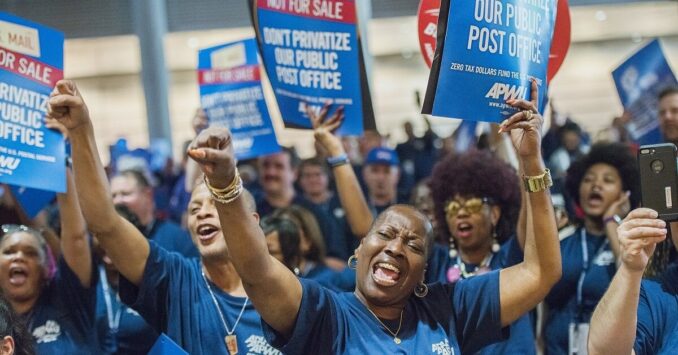 Postal workers have been fighting to defend worker rights and the public service of the USPS for decades. Here members of the American Postal Workers Union rally at their convention in Pittsburgh, Aug. 21, 2018.

This is a naked attempt to illegitimately reelect this openly racist, misogynist, anti-labor, right-wing administration. If their plan succeeds in privatizating the 245-year-old publicly owned Postal Service, the wealthy pro-Trump ideologues, who oppose providing public services where private profits can be made, would have another reason to celebrate.

The service’s network of over 31,000 post offices employs over 600,000 postal workers. Forty percent are women, and nearly 40% are people of color.  They deliver mail to every address in the country six days a week.

New Postmaster General Louis DeJoy, a Trump ally, has imposed work rules that eliminate overtime and keep workers from ensuring all mail is processed and brought to mailboxes by mail carriers — preventing mail from being delivered on time. As the pandemic has reduced the volume of mail, over 600 mail sorting machines are being mothballed or even destroyed, causing more slowdowns. This ignores the probability that mail volume will increase if the economy or the pandemic situation improves.

DeJoy, or “DeLay” as many postal workers call him, has donated millions of dollars to Trump and Republican Party causes. He owns over $30 million in stock in XPO Logistics, a contractor company that processes mail for USPS, a clear conflict of interest!

As this writer stated in this newspaper on May 25, another problematic aspect is DeJoy’s “terrible labor record, rife with sexual harassment, discrimination, speedup, workplace injuries, excessive use of temps, misclassifying workers as independent contractors and inadequate sick leave during the current pandemic.” (tinyurl.com/y5dfu755) 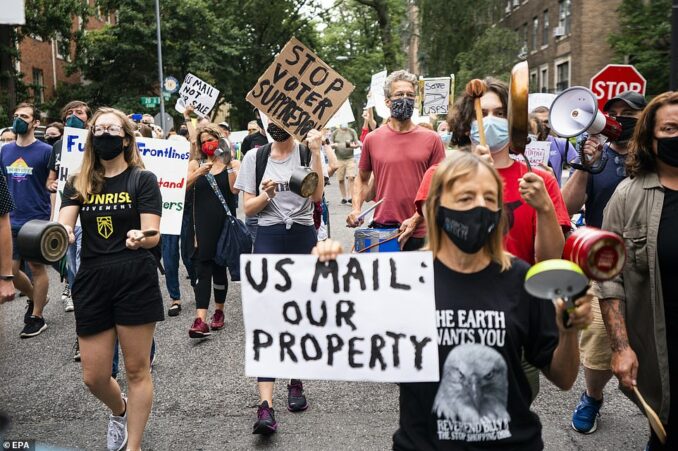 In Washington, D.C., protesters marched Aug. 15 on Postmaster General Louis DeJoy’s home to denounce his orders that cut back postal services and collude on voter suppression.

Understaffed and overworked postal workers report incidents where mail doesn’t go out for days or isn’t going out at all. American Postal Workers Union President Mark Dimondstein told The Atlantic the changes were “demoralizing” for his members: “They’re ordering workers to leave mail for another day. That goes against our DNA.” As for DeJoy’s alleged cost-cutting rationale, Dimondstein stressed: “It’s not called the United States Postal Business. It’s called the United States Postal Service!” (Aug 14)

The Trump administration also installed Trojan horse figures in the Environmental Protection Agency and U.S. departments of Education, Housing and Urban Development, and other federal agencies. They all focus on providing profit-making opportunities for corporations rather than on promoting the common good.

Delaying the mail, suppressing the vote

Customers have made thousands of complaints to postal officials, political leaders and the press. Medications, checks, bills, online orders and other mail are being delayed, sometimes for days and weeks, as mail piles up in massive backlogs at postal facilities.

The possibility that mail-in ballots may be delayed has garnered media headlines, as the 45th president constantly tweets false claims that such ballots are more prone to fraud. This lie undermines the public’s confidence in the USPS’s ability to deliver blank ballots to voters, and then return them to electoral authorities securely and speedily.

Every state has safely used mail-in voting, some for decades. It is a universal practice in Colorado, Hawaii, Oregon, Utah and Washington. A record number of people are expected to vote by mail this year due to the pandemic.

Removal of postal collection boxes from street corners around the U.S. without the required 30-day-notice, especially in low-income neighborhoods and communities of color, reinforces the suspicion that Trump and his supporters are trying to suppress mail-in voting.

Celina Stewart, of the nonpartisan League of Women Voters, commented: “The slowdown is another tool in the toolbox of voter suppression. That’s no secret. We  think this is a voter-suppression tactic.” (Washington Post, Aug 14)

Voting rights have been severely restricted based on race, gender and class going back to the first U.S. presidential election in 1788 when only propertied white men  were allowed to vote. The two-party system limits the possibility of real change through elections. To further rig the system, both big business parties have historically used ballot suppression. Systemic disenfranchisement is rife, with tactics including voter ID laws and gerrymandering — redrawing voting districts to particularly decrease the weight of people of color, low-income and im/migrant communities.

The tag team of Trump and DeJoy are not the first to politicize the Postal Service. President Andrew Jackson, admired by Trump, established a “spoils system” after his election in 1828, whereby the party that won the White House gained the right to award tens of thousands of postal jobs to its supporters, thus securing their loyalty. The postmaster general, inevitably a political crony and fixer eager to do the president’s bidding, became a Cabinet member who oversaw this immense patronage scheme.

Jackson notoriously sought to expand capitalist plunder for profits through seizing Indigenous land, often to expand the enslavement of people of African descent.  He forcibly exiled thousands of Native peoples in the Trail of Tears, a genocidal action in the 1830s. In 1835, Jackson collaborated with his postmaster general to suppress anti-slavery mail from Northern abolitionists.

The corrupt patronage system only ended with the great postal strike of 1970, after which Congress passed the Postal Reorganization Act.  It created a government-business hybrid run by a board of governors nominated by the president and confirmed by the Senate, with a postmaster general chosen by that board. The majority of current board members are Trump appointees, who chose DeJoy, violating the PRA’s anti-patronage intentions.

Corporations got bailed out! Postal Service got sold out!

The USPS is normally self-sufficient, financing operations with its own revenues without using taxpayer money. Congress passed a law in 2006 requiring the Postal Service to fund retiree health benefits for 75 years into the future. That onerous $5.5 billion annual burden is not imposed on any other government agency or private corporation.

With these unnecessary costs, combined with the pandemic’s financial effects, the USPS may run out of funds within a year. So the Postal Board of Governors requested $75 billion in emergency financial assistance, comparable to the huge sums Congress gave to big corporations in the spring’s stimulus bill.

The House of Representatives passed a $25 billion postal rescue plan in May as part of the HEROES Act, but the Senate failed to act on it before adjourning for the summer break. On Aug. 13, Trump blatantly stated he opposes the proposed USPS funding because he wants to make it harder to expand voting by mail.

Postal workers and their supporters have organized petitions and call-in campaigns to Congressional and USPS officials to demand approval of the Postal Service rescue plan, repeal of the 75-year pre-funding requirement and the firing of DeJoy for delaying the mail. It’s only a matter of time until more militant actions against voter and worker suppression take place. (See Facebook Save Our Postal Service.)

Piette is a retired letter carrier and member of the National Association of Letter Carriers.