On March 28, 1996, Workers World Party leading members Monica Moorehead and Larry Holmes traveled to a remote rural township in central Pennsylvania to pay a visit to the dungeon within a dungeon, death row. For at least two hours, they interviewed a shackled Mumia Abu-Jamal from across a thick glass partition. The interview was videoed by the late Key Martin, founder of the People’s Video Network.

The conversation took place less than a year after the state signed a death warrant for Aug. 17 — the birthday of Black Nationalist Marcus Garvey — to execute this wrongly imprisoned Philadelphia journalist, revolutionary and former Black Panther. An estimated 10,000 people held an emergency protest in the streets of Philadelphia on Aug. 12, 1995, that helped stop this legal lynching.  Mumia was eventually taken off death row at Greene state prison in December 2011 thanks to the power of the people. He still remains, after 39 years, in a Pennsylvania prison fighting for his freedom.

The following excerpts are from that interview, originally published in the pamphlet entitled “Mumia Speaks.” 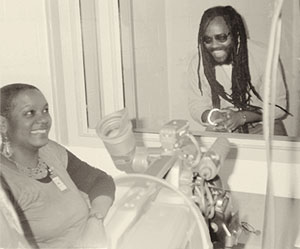 The corrections industry is booming.  And I mean, this joint here ain’t five years old. Some corporations made a mint off this thing.  This thing cost millions of dollars to be constructed.

But second to that you have across the United States for the first time in modern history, small rural counties and districts begging the government to build a prison here please. There was a time when it was “Unh, unh, not in my back yards, you better not.  I don’t want that here.” Now they are talking, “Well, uh, jobs.”

That’s the reality that we are working with. And of course Blacks, Latinos, Hispanics, Mexicans in the West, and Puerto Ricans in the East, and so-called white trash, poor whites, are the raw material now. We’re like the hamburger in McDonald’s, we’re being fed into this. And what you see in Congress and what you see in the statehouses is the greasing of the conveyor belt on that meat-patty line — because there are no laws any more.

Think about it.  When you look at the trend of the law — I mean analyze the cases, read the cases, see what they are saying — you don’t hear anybody talk about “search and seizure” or Fourth Amendment or any other amendment.

What you hear in popular discourse, on talk-radio stations or in the newspaper is “lock ‘em up, lock ‘em up yesterday” or “kill them.”

And it becomes apolitical again — an engine feeding an industry, the prison-industrial complex.

And it is so naked now, so negative now, that as Monica said — you can have more than 1.1 million people in this prison, in these prisons and you have people saying “Well, they need to lock up more people.” You have people actually saying that.

Of course they don’t know what they’re talking about. But they are just following a script that has been laid down to them by the media, by the politicians.

When you spoke about that [prisons] I thought about a recent article that was in the New York Times — you may have seen it — by Sol Wachtler, who used to be the presiding judge of the New York Court of Appeals.  I laughed when I read it, I had a belly laugh, because here’s a guy who was for all intents and purposes a hanging judge. And if somebody made a claim before his court, well, “No, he gets nothing. Cut.” Shot people down as if it was fun.

But in his article he talks about the difference between reading a brief about an inmate who sued about the humiliation of strip search and going through that experience himself, and how devastated he was by it. But every one of those 1.1 million people — and if you look across the country now, you don’t have to go through prison to go through that humiliation, you can go to your average police department down the block. Someone gets arrested for a traffic violation, a ticket, and men and women are being strip searched in every city in America.  You see what I’m saying.

So what he was in a position of power and he could have said this is unconstitutional, or it violates this, “Well, no, doesn’t make a claim, next, denied.” And he didn’t sense how wrong, how wrong, how cold-hearted that was — until it was him that had to spread his buttocks, until it was him that had to pull his penis back.  You understand what I’m saying?  It became a whole other reality.

The Jamaicans have a saying: ‘Who feels it knows it.’

Well, now he knows it.  A little too late, though, ain’t it?

It must be a new system or the abolition of this system. It must be.

Right now we are in an era where there is a depression for workers but a boom time for capital, for those with wealth, for those who own stock and mutual funds and so forth.

The real secret is that I’m free now — they just ain’t dug it yet. They have tried to cage me in every way they could, they tried to kill me in the street, and every attempt they’ve made has been a bitter failure for them.